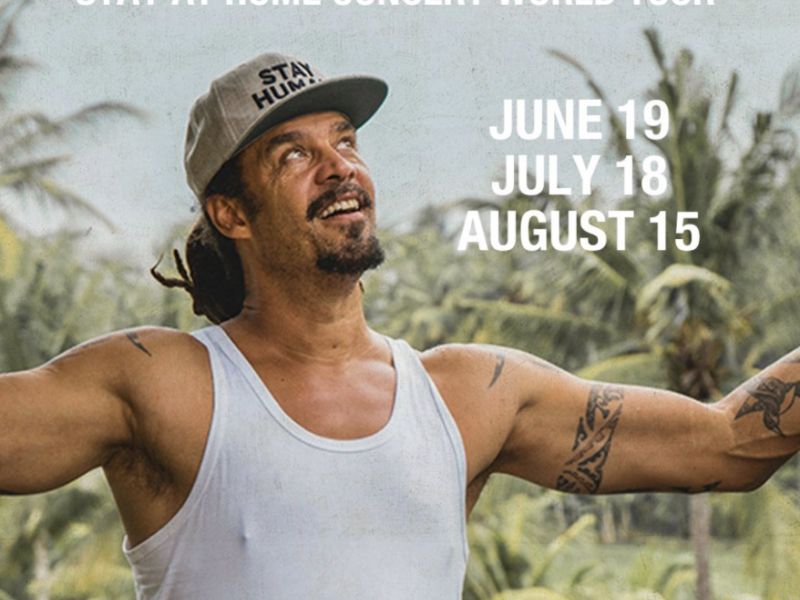 UBUD, Bali – With concerts currently postponed, globally recognized musician and humanitarian Michael Franti has an alternative to socially connect with his Soulrocker community while physically distancing from one another: Stay at Home Concert World Tour series. With its first three dates announced, the series features live performances and interactive opportunities during shows scheduled for June 19, July 18 and August 15. Each show begins at 6 p.m. PT / 9 p.m. ET and will be available on demand for 24 hours after the show has ended. Tickets are available for purchase HERE.

Each show offers a different experience with themes: Work Hard And Be Nice Record Release Party June 19; Michael Franti Live from Soulshine Bali on July 18; and the Soulrocker House Party on August 15. The first 500 fans to purchase tickets will be given access to a private Zoom “Backstage” party room in addition to the live stream, where they will be able to interact with Franti and other fans enjoying the show and participate in sing-a-longs, games and more. “Recently, I’ve done several online concerts that exceeded my expectations in terms of intimacy and energy as I watched people in quarantine dancing along and hugging one another in their living rooms with the same passion as they do in large venues. I've become a believer in the idea that magic can happen in this online shared space,” Franti elaborates. “That community and celebration together doesn’t have to stop just because we can’t gather together.”
When purchasing tickets, fans can choose to attend an individual show for $22 or purchase a bundle for all three shows for $56. Attendees can also add on brand new merchandise for an additional price. A portion of each ticket will be going to charity as well.
Work Hard And Be Nice, Michael Franti & Spearhead’s 11th studio album, is set for release on June 19 with lead single “I Got You” currently climbing up the AAA charts. “I’m On Your Side,” “How We Living,” “All My Friends,” “Sun and Moon,” “Good Shit Happens” and “Breaking Down The Door” are also available now. Pre-order/pre-save Work Hard And Be Nice HERE.

“Every song on the album is about the power of optimism to get us through our darkest moments and find the light in our loves, lives and for the planet,” shares Franti.

“I collaborated with many different incredible songwriters and it was amazing to hear how all of them understood completely the idea of how important it is for people to have ease of heart in these troubled times,” he continues. “The need for emotions to be able to pass effortlessly as they arise. Music helps with that, and sometimes it brings out feelings we never even knew existed. As I set out making the record, I hoped that it would move people’s hearts and bodies and inspire people to take on the great challenges the world faces today, with courage, love and bold optimism!”