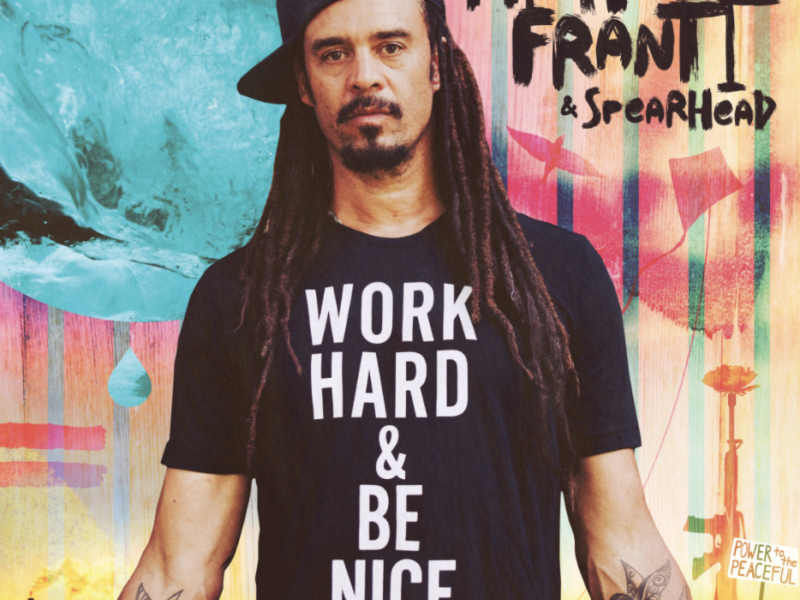 UBUD, Bali – Kicking-off the announcement of new music with a stunning new music video for lead song “I’m On Your Side” filmed in 48 hours while in quarantine, musician and global artist Michael Franti shares first new music of 2020 along with so many ways to celebrate community while physically distancing.

“There is no better time for music that helps us laugh, cry, rage, soothe, dance and sing through the sea of emotions boiling inside each of us. How beautiful that we can come together today of all days, on Earth Day. While we may be physically distancing, socially I love how we’re coming together,” he shares, announcing his forthcoming 11th studio album, Work Hard And Be Nice, set for release on June 19, 2020 on Thirty Tigers with lead songs – “How We Living” and the propitious “I’m On Your Side” out today along with the pre-order/pre-save. See the music video for “I’m On Your Side,” HERE. Directed by Franti, the video made its debut last night at 11:59 p.m., paying homage to the fan favorite collaboration with Sonna Rele.

“I wrote ‘I’m On Your Side’ to share the message that despite the labels we put on each other to divide us into different groups and force us to choose sides, like political ideologies, gender, race, religion, sexuality and economic standing, we have a lot more in common than we do in difference. We all ‘stay awake at night wondering if we’ll be all right,’ or sit ‘…at the kitchen table counting up the bills to pay.’”

Adding “And in each of those situations where we start to feel hopelessness creeping in, when we feel most alone in the battle, I want the listener to know, I feel it too. I’m there with you in spirit, without judgment, in solidarity and ‘I’m On Your Side.’”

Today Franti also released “How We Living” about taking the time to celebrate the fun side of life. “The inspiration for this song was really the break that all of us need and deserve from the chaos of our daily grind, and in gratitude for all the joy that life brings us despite all the hurt in the world. It’s also a gentle reminder that ‘If you’re looking for the problems in this world, you’re gonna find ‘em, all you’ve gotta do is look out the door. But if you’re looking for that good stuff, it’s already up inside you, all you’ve gotta do is just let it show.’”

The 17-song album, available to pre-save and pre-order now, started off as an idea: That it’s important in this time of division in the world to Work Hard And Be Nice To People.

“Before there was a song and an album by the title, I had a discussion with our band and crew that our mantra on tour was going to be 'work hard and be nice to people.' We then made a t-shirt, and it very quickly became our top-seller! It was so popular that I decided to write a song about the concept,” Franti reveals. “Every song on the album is about the power of optimism to get us through our darkest moments and find the light in our loves, lives and for the planet.”

“I collaborated with many different incredible songwriters and it was amazing to hear how all of them understood completely the idea of how important it is for people to have ease of heart in these troubled times,” he continues, “The need for emotions to be able to pass effortlessly as they arise. Music helps with that, and sometimes it brings out feelings we never even knew existed. As I set out making the record, I hoped that it would move people’s hearts and bodies and inspire people to take on the great challenges the world faces today, with courage, love and bold optimism!”

No one could have imagined the world looking like it does today with citizens around the world in self-quarantine, however as we listen to the songs on Work Hard And Be Nice, they speak to how we get through the greatest ups and downs of our lives with our body, mind and soul still in one piece.

“Today, we are being called to connect with the hearts of others to literally bring about the healing of the planet,” Franti reflects. “There is no higher calling, and I hope this music helps people know that they are not alone in the effort. Each person’s role makes a difference, and we will create billions of small victories that all add up…together!”

The award-winning film “Stay Human,” directed by Franti and coined by Woody Harrelson as “the film every human needs to watch right now,” will have its YouTube  premiere, partnered with Levi’s®, this evening, Wednesday, April 22 at 5 p.m. PT with a Q&A and acoustic performance with Franti via Instagram immediately following the screening. Watch the trailer HERE.

In continued celebration of Earth Day and the announcement of Work Hard And Be Nice, Franti will join Earth Day Live on Thursday, April 23 at 6:30 p.m. PT, and on Friday, April 24, he will join Together We Breathe Hope, a free virtual concert benefiting the National Jewish Health COVID-19 Emergency Response Fund.