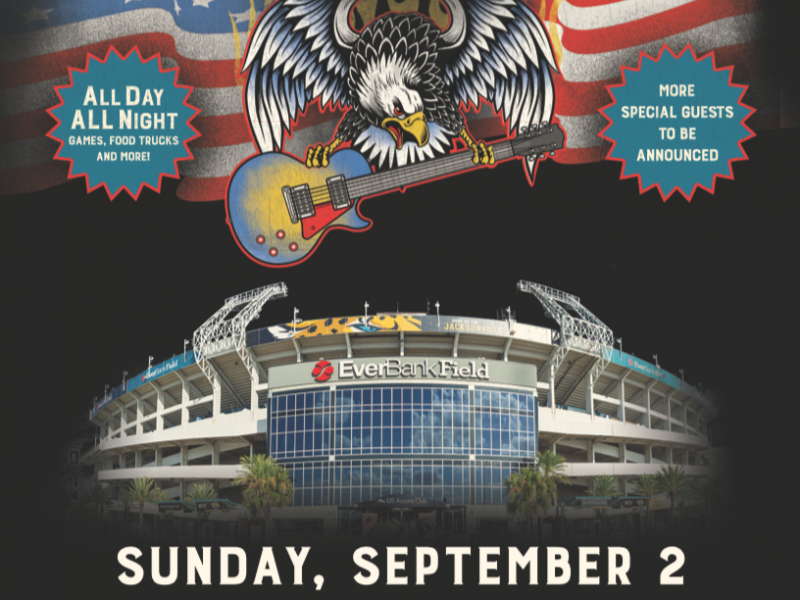 The Jacksonville Jaguars and Bold Events announced today that Lynyrd Skynyrd, Jason Aldean and Kid Rock will co-headline a day of music and fun on Sunday, Sept. 2 at EverBank Field in Jacksonville, Fla. Band members Johnny Van Zant and Rickey Medlocke were on hand for this morning’s press conference held at the Jaguars’ annual State of the Franchise presentation. View the announcement here: www.jaguars.com.

The concert will be a special homecoming for the band as they return to perform where their legacy began over 40 years ago. The Labor Day weekend appearance will also include more special guests to be announced soon. In addition to performances, the all-day, all-night event will also feature food trucks, games and more.

The Rock & Roll Hall of Famers’ final tour, Last of the Street Survivors Farewell Tour, presented by SiriusXM and produced by Live Nation, begins May 4 in West Palm Beach, Fla. at the Coral Sky Amphitheatre.

With a catalog of over 60 albums and sales in excess of 30 million worldwide, the band that USA Today called the “whiskey-soaked genre's most popular and influential crew,” has become a cultural icon that has spanned five decades. Original member Gary Rossington joined by Johnny Van Zant, Rickey Medlocke, Mark “Sparky” Matejka, Michael Cartellone, Keith Christopher, Peter Keys, Dale Krantz Rossington and Carol Chase are ready to rock their hometown of Jacksonville.

“We are very excited to have friends Jason Aldean and Kid Rock join us in our hometown of Jacksonville,” said Rossington. “Playing where the band got its start all those years ago is always special but having these guys with us makes it even sweeter. We can’t wait to rock EverBank Field!”

“This major stadium event demonstrates the Jaguars’ and Bold Events’ commitments with the City of Jacksonville and our stadium manager, SMG, to bring the highest brand of musical entertainment to Jacksonville,” said Jaguars and Bold Events President Mark Lamping.  “This Labor Day weekend, not only will EverBank Field be the place to celebrate Lynyrd Skynyrd’s return to their hometown of Jacksonville along with Kid Rock and Jason Aldean, but it will be the party of all parties to kick off the Jaguars season.”