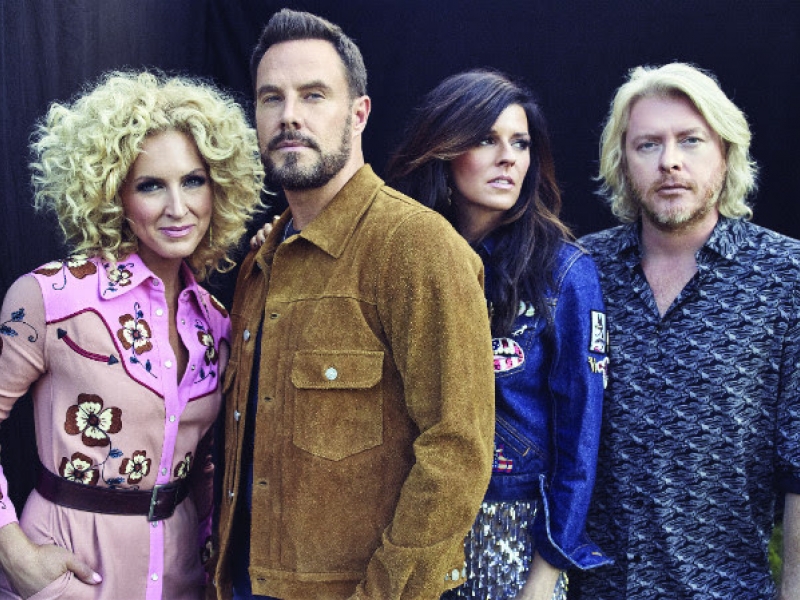 NASHVILLE – The Music City Walk of Fame will pay tribute to the Ryman Auditorium in celebration of the historic venue’s 125th anniversary with the induction and presentation of stars to Little Big Town, the Country Music mega-group in residency at the Mother Church, along with two luminaries in the Ryman’s past: Tom Ryman, the riverboat captain who was inspired by a revival preacher to build the Union Gospel Tabernacle; and Lula C. Naff, the theater manager who helmed the Auditorium for more than 40 years and famously booked the Grand Ole Opry there, the Nashville Convention & Visitors Corp announced today.

The induction ceremony that will take place on Thursday, Sept. 14, 2017 at 1 p.m. in Walk of Fame Park. The event is free and open to the public.

“Tom Ryman had a vision. Lula Naff had a plan. And their tenacity and skill created one of Nashville’s most beautiful and iconic buildings – and one of the greatest music venues the world has ever seen,” Mayor Megan Barry said. “Now Little Big Town is adding a new chapter to the story of the Mother Church of Country Music with its unprecedented Ryman residency. The induction of each of these legends into the Music City Walk of Fame couldn’t be more appropriate as the Ryman celebrates 125 years of gorgeous music and amazing history.”

The inductees will receive the 75th, 76th and 77th stars on the Music City Walk of Fame. Inductees are recognized for their significant contributions to preserving the musical heritage of Nashville and for contributing to the world through song or other industry collaboration.

Colin Reed, Chairman and CEO of Ryman Hospitality Properties, said, “As the stewards of Ryman Auditorium, it is a great honor for our Company to accept this recognition on behalf of Tom Ryman and Lula Naff, two people who helped lay the foundation for Nashville’s cultural identity as Music City. In this milestone anniversary year for the Ryman, we are particularly pleased to see these figures from its past recognized alongside members of our Opry family who are carrying forward the rich traditions that made the Mother Church the world-renown venue it is today.”

In celebrating the Ryman’s 125th anniversary, Little Big Town will have performed 10 shows by the end of 2017 at the Ryman Auditorium during their year-long residency. Consisting of members Karen Fairchild, Phillip Sweet, Kimberly Schlapman, and Jimi Westbrook, Little Big Town is a member of the Grand Ole Opry, had the biggest country single of 2015 with “Girl Crush,” and earlier this year released their seventh studio album, The Breaker, which debuted No. 1 on the Billboard Country Charts.

The Music City Walk of Fame was created in 2006 on Nashville’s Music Mile, a roughly one-mile stretch that connects downtown to Music Row. Permanent sidewalk medallions with the names of the inductees are displayed in a star-and-guitar design.

Little Big Town
GRAMMY Award-winning group, Little Big Town -- consisting of members Karen Fairchild, Phillip Sweet, Kimberly Schlapman, and Jimi Westbrook -- first entered the music scene more than 18 years ago with hits such as “Boondocks,” “Bring It On Home,” “Good As Gone” and the GRAMMY-nominated single “Little White Church.” With albums Tornado and Pain Killer, they have seen massive success with #1 singles “Pontoon,” “Tornado,” “Day Drinking,” and most recently the history-making, best-selling country single of 2015, “Girl Crush,” and the recent two-week #1 single, “Better Man.” In October of 2014, the group fulfilled a career milestone and lifelong dream when Reba McIntire asked them to become the newest members of the Grand Ole Opry; two weeks later, they were inducted. Little Big Town has earned almost 40 award show nominations and in the past five years has taken home nearly 20 awards, including multiple GRAMMY, CMA and ACM awards, and an Emmy award. They are the reigning CMA Vocal Group of the Year and recently won the same award for the fifth consecutive year. At the 2016 GRAMMY Awards, Little Big Town won “Best Country Group/Duo Performance,” and “Girl Crush” received the honor for “Best Country Song.” The group recently received honors from the Academy of Country Music for Vocal Group of the Year and Vocal Event of the Year with Miranda Lambert, and the group was also recognized with the Crystal Milestone Award. At the recent Billboard Awards, Little Big Town and “Girl Crush” were nominated for Top Country Song as well as Chart Achievement Award, and the group was also honored as the 2016 Music Business Association Artist of the Year. Released February 24, 2017, Little Big Town's seventh studio album, The Breakerdebuted #1 on the Billboard Country Charts and Top 10 (No.4) on the Billboard 200, marking the group’s fourth Top 10 debut on the Billboard 200 chart.  Their current single, “When Someone Stops Loving You is now at country radio. Little Big Town recently launched its history-making year-long artist residency at the famed Ryman Auditorium in Nashville -- marking the venue’s first-ever, year-long residency in its 125-year history. For tickets and more information on ‘Little Big Town At The Mother Church” visit LittleBigTown.com or follow them @littlebigtown.

Tom Ryman
Riverboat Captain Thomas Green Ryman was a Nashville businessman and the owner of a major riverboat company who built a church that forever changed the face of music. On the night of May 10, 1885, Ryman arrived at a downtown Nashville religious revival to see what all the fuss was about; he left town that evening called by God to build a big, beautiful church by the revival sermons of Reverend Sam Jones on the very spot where the Auditorium now sits. Construction took seven years and approximately $100,000, and the Union Gospel Tabernacle opened in 1892 with Jones at the pulpit. When Ryman died in 1904, he was widely regarded as an exceptional businessman and a pillar of faith, generosity and kindness in the Nashville community. At his funeral on Christmas Day, Sam Jones proposed to the 5,000 mourners in attendance that the building be re-named in the Captain’s honor as the Ryman Auditorium. Today, a copper statue of the Captain stands on Ryman Plaza near the Auditorium’s entrance, facing east toward the river that fueled the fortune behind what would become affectionately known as the Mother Church of Country Music.

Lula C. Naff
Lula C. Naff was the Ryman Auditorium’s legendary theater manager who helmed the venue for more than 40 years, booking the Grand Ole Opry and a diverse who’s who of talent from Katharine Hepburn to Harry Houdini and Bob Hope to the Ziegfeld Follies. She was named Manager Emeritus when she retired in 1955. During her tenure, her vision for the Ryman was strategic and ever-evolving, branching out to include boxing matches, livestock auctions, political debates and more. She had a reputation for standing up for what she believed in, fighting censorship groups in court and welcoming diversity onstage and off. In 1943, she famously agreed to let the rowdy Grand Ole Opry show put down roots in the Auditorium, and the show filled her Saturday nights -and the nation’s airwaves- with music and comedy for the rest of her career and beyond.