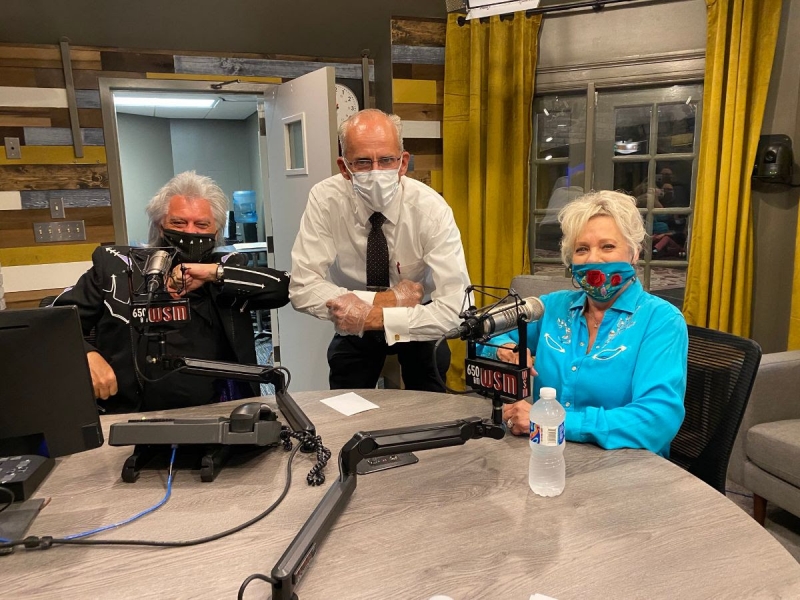 After nearly a life-long career in country music and more than two decades with the most famed country station in the world 650 AM WSM, iconic radio personality Eddie Stubbs said farewell Wednesday, July 29, 2020. Stubbs final show included in studio visits with Connie Smith and Marty Stuart and well wishes via phone from Loretta Lynn, Too Slim of Riders in the Sky and for the first time in his 25-year career, a chat with Dolly Parton; listen to the final show HERE. Check out additional star-studded well wishes for Stubbs from Garth Brooks, Carrie Underwood, Keith Urban and more in the video HERE.In addition to the interview with Parton, Stubbs checked another bucket list subject off his list with legendary journalist Dan Rather joining him on Monday, July 27. Rather shared his love of country music and recounted listening to the Opry on WSM as a child sharing, “It was like an adventure. When the program was over you felt like you’d been on a trip.” He also offered his well wishes to Stubbs and declared, “if you get in trouble and need bail money don’t hesitate to call me.”

Stubbs wry wit and humor ever on display, he concluded his final broadcast telling listeners simply, “This is Eddie Stubbs saying so long for now,” before ending the night with The Bailes Brothers' “Goodbye Hallelujah I’m Gone.”

On July 8, 1996, Stubbs began hosting the evening shift on WSM and now holds the distinction of being the longest-serving broadcaster in the 7 p.m. to midnight slot in WSM’s 95 years of operation. With a different theme each night, ‘Hall Of Fame Monday,’ ‘Two For Tuesday,’ Way Back Wednesday,’ ‘Classic Opry Thursday’ and ‘WSM By Request’ on Fridays, Stubbs’ unique insight into the stories and the people behind the music always gave listeners a reason to tune in.

Stubbs came to Nashville on March 21, 1995 to play fiddle with the Queen of Country Music Kitty Wells and her husband Johnnie Wright. A week later he was hired part-time at WSM. Just seventeen days after his arrival in Music City, Eddie auditioned for the announcer’s position on the Grand Ole Opry show.

Stubbs earned the Country Music Association’s Large Market Broadcast Personality of the Year award in 2002. In 2012, he received country radio’s highest honor by becoming one of the youngest living inductees into the Country Radio Hall of Fame.

WSM will soon announce plans for the 7 p.m. - midnight shift. In the meantime, Jeff Hoag, who has worked with Eddie over the years, will serve as host.