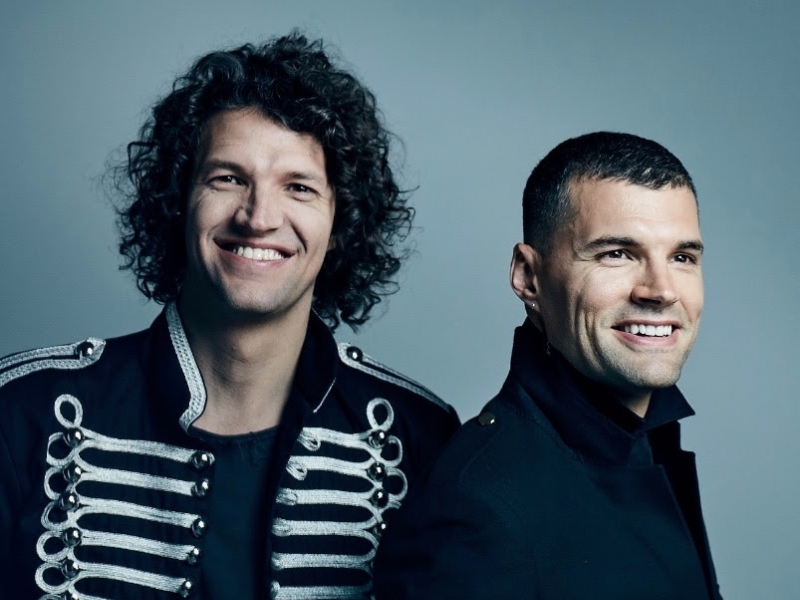 Four-time GRAMMY® award-winning Australian duo,  for KING & COUNTRY,  will  bring their "A Drummer Boy Christmas Show" to the Grand Ole Opry House Sunday, November 29. After kicking off “Live at the Ryman,” the first of a series of virtual shows at the historic “Mother Church” (which eventually welcomed back limited in-venue audiences), the Grammy-winning duo return to Music City, this time to the Grand Ole Opry House, their first time performing at the famed venue. While fans might not have been able to join the band in person for the Ryman date, this time not only will there be limited in-venue tickets available but it will also be the only opportunity for fans worldwide to join virtually via livestream. Tickets  for both in-venue and livestream are  on sale now at  ryman.com.

for KING & COUNTRY, comprised of brothers Joel and Luke  Smallbone,  has had one of their  biggest years to date so far in 2020, taking home the GRAMMY® award in the Contemporary Christian Music Performance/Song category for their No. 1 single “God Only Knows.” The single, a collaboration with renowned entertainer Dolly Parton, spent 11 weeks at No. 1. Additionally, the album that produced the original hit - burn the ships - won a GRAMMY® in the Contemporary Christian  Music Album category.  Their song “TOGETHER” (feat. Kirk Franklin and Tori Kelly) debuted on "Good Morning America" in May and went on to be a multi-week No. 1 single.

“For us Australian immigrants - who have called Nashville ‘home’ for most of our lives - our reverence and love for Ryman Auditorium runs deep,” shares Joel. “So to have the opportunity to kick off their inaugural ‘Live at the Ryman’ Livestream concert series in August was extraordinary and a night we’ll not forget.”

“And today, we are truly feeling the love after hearing the response to the announcement of our upcoming show on November 29 at the famed Grand Ole Opry House,” Joel adds. “The chance to share music from our first ever full-length Christmas album, A Drummer Boy Christmas, in such a time as this in our American hometown is a musician's storybook ending to a difficult year for so many.”

The duo’s A Drummer Boy Drive-In: The Christmas Tour is in celebration of their first-ever Christmas album A Drummer Boy Christmas. for KING & COUNTRY has partnered with The Salvation Army for a national toy drive that asks concertgoers to bring new, unwrapped toys that will be collected by representatives from the local Salvation Army and distributed to families struggling during the holiday season. Visit Rescue Christmas to learn more.

First implemented at the Ryman to incorporate a small, socially distanced audience in accordance with local health ordinances, this hybrid concert model of in-person and livestream audience was developed by Opry Entertainment with input from the company’s official wellness advisor, Vanderbilt Health, to allow fans from across the country and around the world to experience live music from home while also safely and responsibly welcoming back a limited number of guests to experience live music. On Oct. 4 the Grand Ole Opry House welcomed back a limited capacity audience to the Grand Ole Opry for the first time since the pandemic began using this model.

About for KING & COUNTRY:
Four-time GRAMMY® award-winning Australian duo, for KING & COUNTRY, comprised of brothers Joel and Luke Smallbone, collaborated with renowned entertainer Dolly Parton to release a brand-new version of the duo’s 11-week #1 hit “God Only Knows” in 2019. In 2020, the track won a GRAMMY® award in the Contemporary Christian Music Performance/Song category, and the album that produced the original hit-burn the ships-won a GRAMMY® in the Contemporary Christian Music Album category. for KING & COUNTRY graced the CMA stage to perform “God Only Knows” with Dolly Parton at the CMA Awards, and performed their unique and powerful rendition of “Little Drummer Boy” at CMA Country Christmas, receiving national critical praise for both. In the days following their Christmas performance, Joel and Luke Smallbone saw their previously released version of “Little Drummer Boy” undergo a 1,338% increase in downloads, a 60% increase in on-demand streams, and sit atop Billboard’s Christian Digital songs chart. They have garnered six No. 1 hits, nine Top 10 hits, six GRAMMY® nominations, three Billboard Music Award Nominations, an American Music Award nomination, and had songs featured on the Emmys, Super Bowl, Sunday Night Football and other high-profile events. National performances include "The Tonight Show," "Today Show," "Jimmy Kimmel Live!," "The View," CMA Awards, and CMA Country Christmas. The duo’s burn the ships | world tour,which SOLD-OUT over 40 shows across the world including USA, Australia, Germany, Netherlands, and New Zealand. In total, for KING & COUNTRY has accumulated 1 billion on demand streams.

About Ryman Auditorium:
A National Historic Landmark, Ryman Auditorium was built by Captain Thomas G. Ryman in 1892. Ryman Auditorium is a 12-time winner of the prestigious  Pollstar  Theatre of the Year award. The historic venue is well-known as the "Mother Church of Country Music" and is the most famous former home of Grand Ole Opry (1943-1974). The Ryman has been featured in numerous film and television projects including  Coal Miner’s Daughter, " The Johnny Cash Show", "American Idol," Nashville, and more. While offering a diverse lineup and thriving concert schedule (with over 200 shows per year), the venue is also open for daytime tours year-round. A coveted under-play for many, her iconic stage has seen the likes of Bruce Springsteen, Mumford and Sons and Tom Petty in recent years. Ryman Auditorium is owned by Ryman Hospitality Properties, Inc. (NYSE: RHP), a Nashville-based REIT that also owns and operates the Grand Ole Opry, 650 AM WSM and Ole Red. For more information, visit  ryman.com.