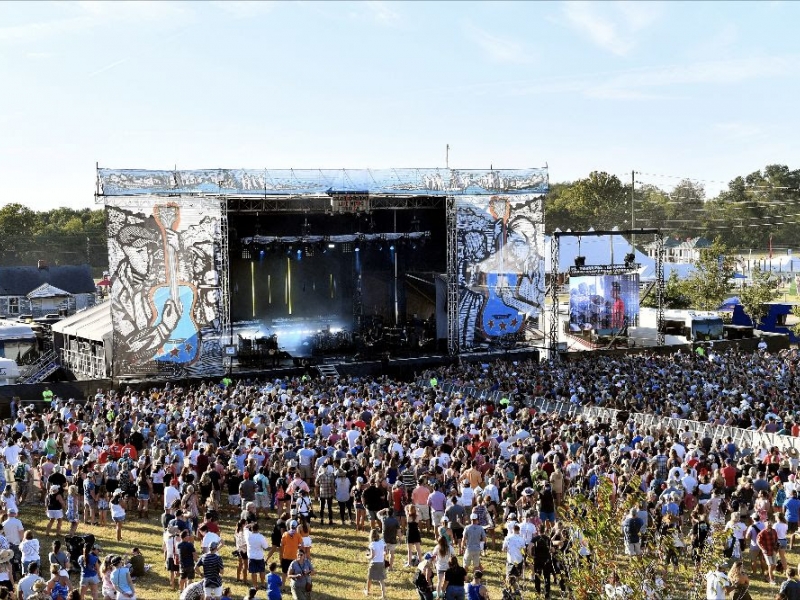 Butch Walker, Lucie Silvas, Lauren Daigle, Leon Bridges, Edie Brickell & New Bohemians and The Head and The Heart Among Performances Kicking Off Day 1 at Harlinsdale Farm When frontman Brandon Flowers finally took a break to address the crowd, he said, “We always love coming to Tennessee. It makes us up our game, because we know you know your music down here.”  Keith Urban was close to home as he performed a hit-filled show featuring recent songs, like “Somewhere in My Car” and “Blue Ain’t Your Color,” mixed in with classic tracks “You’re Gonna Fly” and “Somebody Like You.” Urban told his hometown crowd, “There’s a lot of love in the field tonight.” He then went into the crowd and signed a bunch of posters and an electric guitar before heading back to stage to sing “Cop Car.” Leon Bridges had festival-goers dancing and throwing their hands up on high-energy numbers like “Mississippi Kisses” and “Brown Skin Girl.” He also set a romantic mood with the soulful “Shy” and the country-flavored “Beyond.” Lauren Daigle mixed in bits of Aretha Franklin’s “Think” and Kool & the Gang’s “Jungle Boogie” into her opening song, “Still Rolling Stones,” before later leading a singalong of her GRAMMY-winning hit “You Say.” She also shared a story from the last time she attended Pilgrimage a few years back as a fan. Daigle was battling a bad case of the flu, but she didn’t let that stop her from catching performances from Gary Clark, Jr. and Justin Timberlake. Daigle said, “The next morning, I woke up, and the flu was gone. I sweat it out at Pilgrimage.”  Butch Walker’s set featured a guest appearance from The Watson Twins on the last three songs, “Summer Belt,” “Summer of ’89” and “Hot Girls in Good Moods,” before walking through the crowd to close out the show. Lucie Silvas treated fans to selections from her latest album, E.G.O., and husband-and-wife duo The War and Treaty kicked off their show previewing four new, soulful tracks from their upcoming album, including the instant sing-along, “Five More Minutes.” The Head and The Heart, Edie Brickell & New Bohemians and Phosphorecent were among the other acts performing under blue skies at The Park at Harlinsdale.  At the top of the day, Pilgrimage Festival founders Kevin Griffin, Brandt Wood and Michael Whelan hosted a Q&A at the Americana Music Triangle Experience. They laid out their plans for the future of the event, promising to keep the event at its current size and scale while retaining a distinctively Middle Tennessee flavor in the coming years.Gates open at 10 a.m. with performances across six stages tomorrow morning (Sunday, September 22) with performances running through 8:30 p.m. Tickets for Sunday are still available for purchase at the gate.