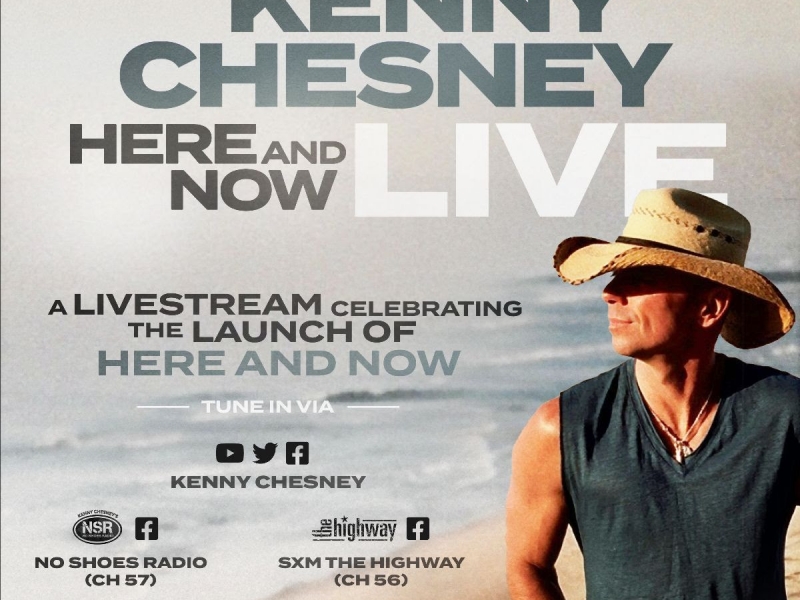 Live Event Celebrates New Album’s Release May 1 at 6 p.m. CT
With Questions from Long Time Fans, This Is As Personal As It Gets

NASHVILLE, Tenn. – Kenny Chesney has spent a lot of time talking about No Shoes Nation over the last several years. Starting with his Platinum-certified Live in No Shoes Nation, recorded over the decade preceding it at stadiums, beach bars, amphitheaters and arenas across the country, he’s drawn on the passion, energy and make-it-happen reality that defines the people who have made the East Tennessean the only country artist on Billboard’s Top 10 Touring Acts of the Past 25 Years for over a dozen years.

So, when it came time to figure out how to mark the release of Here And Now, there was only one thing to do: engage the fans. Though notoriously shy when it comes to social media, he wanted an immediacy of talking about this music with his fans -- and felt strongly about experiencing some of the songs together, even in this most unconventional of ways.

“We aren’t on the road yet, and I know what a big part of the summer the shows are for me,” Chesney explains. “My records are complete when I feel the energy go out from the songs, circle into the crowd and then come back. It’s crazy how No Shoes Nation always opens these songs and my music up to me in ways I don’t see coming.

“Just this weekend, sitting at home, someone called me about the #VirtualTailgateParty,” he continues laughing. “Next thing I know, I’m getting a video from someone’s Instagram from Lot 12 at AT&T Stadium, where the tour kick-off reunion of the hardcore No Shoes Nation was gonna happen. Crazy stuff, but it gives me so much energy! You have no idea.”

The 30-minute live event will be hosted across Chesney’s social media platforms, on KennyChesney.com and simulcast on SiriusXM’s The Highway (Channel 56) and No Shoes Radio (Channel 57) as well as the SiriusXM channels’ Facebook pages at 6 p.m. CT on May 1, the same day Here And Now is available everywhere. There will also be a No Shoes Radio walk-up special on SiriusXM’s No Shoes Radio.

Due to social distancing, Kenny will be doing his Facebook live with minimal help. So rather than taking questions on the spot, he’s asking for all friends, fans and curious to submit what they want to say starting today. All questions posted to his socials will be forwarded to the house, gone through and culled into the best of what everyone wants to know.

“I’m used to having the whole crew,” admits the guy whose savor-the-present anthem “Here And Now” is hitting the Top 10, “so, this could be a little ‘let’s see how we do this...’ But we’re gonna play some songs, answer some questions, hopefully have some fun – and kick this album off the way that means the most to me: with No Shoes Nation in No Shoes Nation!

“I always tell people No Shoes Nation is a country without borders, where everyone’s welcome. With Here And Now, we’re taking that idea into a whole other dimension. So, come on! This album’s a whole lot of people, places, moments we’ve all been, lived and understand. Let’s get together and kick this album off right.”