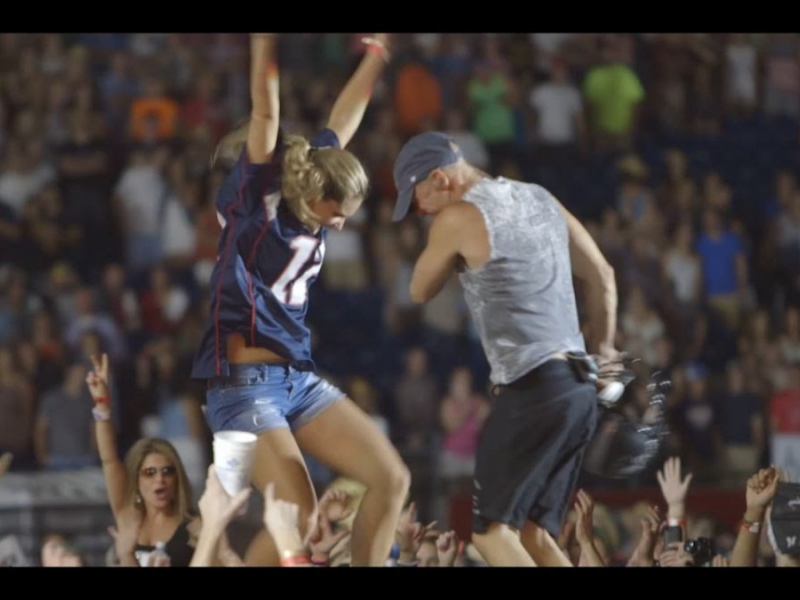 When Kenny Chesney opened Here And Now with “We Do,” it was an anthem, a rocker and a siren’s call from the heart of No Shoes Nation. The clip – shot in Boston, Pittsburgh, Tampa, Fort Lauderdale, Anaheim, Philadelphia, on the 7 Mile Bridge out of the Keys and somewhere in the Saints – is a quick-cut celebration that illustrates the eight-time Entertainer of the Year’s call and response battle cry: “Who LIVES like we do?” “WE DO!” “I always say, ‘If people could see what we see from that stage, from the golf carts swooping through the parking lots, the top of the stadiums and everywhere else, they’d know why No Shoes Nation is the greatest group of passionate, loud, awesome people in the world!’” Chesney says. “And if a picture is worth a thousand words, then here’s a billion of ‘em in this video, set to a song written from me to them. No holding back, just full on here it comes.” Jeeps, pirate flags, license plates, football helmets, baseball caps, sailfish, school buses, tiki cups, birthday cakes, quart-sized margaritas, conga lines, the surge of a downstroke, sold-out stadiums, heavy metal blenders, dancing, hugging, playing for keeps, Grace Potter t-shirts, blue skies, starry nights, skulls with leis, crew cheers, boats on the water, titanium tour staff, a bass player named Harmoni, coolers, kids, sunglasses, sunburns, Winnebagos and the power of connection between one man, his band and a whole lotta fans, it’s all here. And then some. Directed by Shaun Silva, the “We Do” video is the euphoria and spontaneous eruption that is one of Kenny Chesney’s massive summer concerts. Equal parts rock concert, pep rally, family reunion and the songs that have defined coming of age and the spirit of summer for the last two decades, the video for “We Do” is a manifest for the way people can find release, joy and a few hours of pure exhilaration in the throes of the songs they live and love by. “I’ve wanted to paint this picture for a long time,” Chesney offers. “But I never had the song that said what I needed to say about what we all share together. Once I did, it was a matter of how to build this clip in a way that captures the essence of it! Because you try to tell people, and they can’t quite get their heads around it. “I look at those faces, the kids up on the stage hugging me, the guy throwing his arms into the air on his dad’s shoulders, and I think, ‘YEAH! That’s what the best rockers did for me, too.’ No matter how hard I work, how much we play, I will spend my life trying to give back as much as they give us – because nobody throws passion at a band harder than No Shoes Nation.” Keeping with his take-it-straight-to-the-fans launch for Here And Now, Chesney decided that rather than a big set-up or media exclusive, he wanted to surprise drop the official music video on YouTube. And that’s just what he did. At 6:30 p.m. CT, with little fan-fare, he introduced the clip, raved about his fans and sent “We Do” into the world. “Everything now is just so different,” he explains. “There’s so much we can’t know. But the one thing I am absolutely, completely sure of is this: No matter when, no matter where, No Shoes Nation shows up, brings it hard and leaves everything they’ve got whenever we’re together. So, from me to them, ‘Who gets to live like we do? WE DO!”