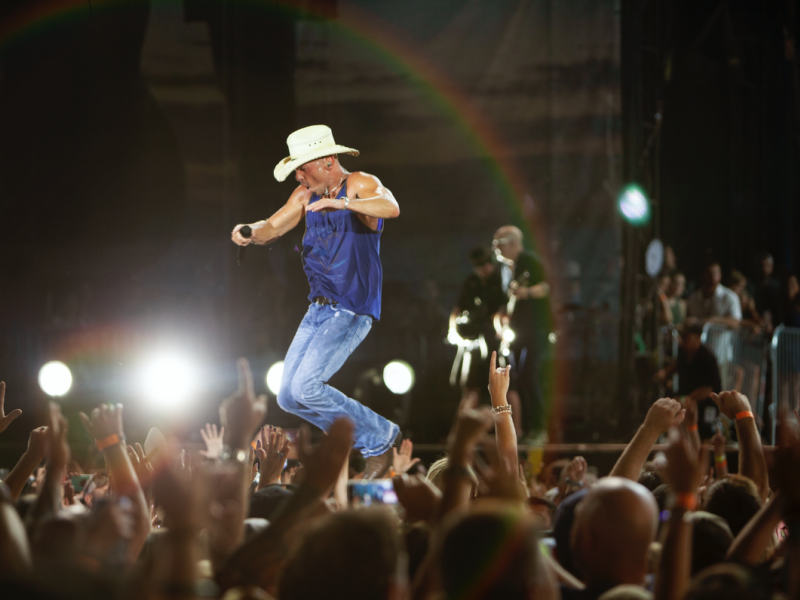 Having crossed the million-person mark in Boston alone on his 2018 Trip Around the Sun Tour, Kenny Chesney took home the award for Top Country Tour at the Billboard Music Awards last night. After playing 19 stadiums across 41 concert dates, the man Variety calls “Country’s only true long-term stadium act” was thrilled to hear the news. “You don’t tour for awards,” says the East Tennessee songwriter/superstar. “Every night when we hit that stage and hear those fans, that’s the real award. But as I like to say, ‘There’s no group of people with more heart than No Shoes Nation.’ They’re all spirit, all passion, and man, they really brought it last summer! So, to me, winning this award is all about them – and what they bring to every single show we play.” Currently in the midst of his taking-it-to-the-people arena Songs for the Saints 2019 Tour, focusing on markets where the fans don’t have easy access to his full-throttle stadium shows, Chesney is finding ways to change sight lines in every venue to add more tickets. “We can’t really tell how to open seats up until we get there, but as a kid growing up going to shows at the Knoxville Civic Auditorium, I get wanting to be there – and I want to make sure everyone who wants to come out and sing these songs with us can.” As the only Country act in the Top 10 of Billboard’s Top 25 Live Artists over the last 25 years, Chesney’s live shows are legendary. Merging surging, up-tempo songs that celebrate the joy of being alive with a wall of rock & roll-leaning guitars, a strong sense of being rooted in smaller towns and an indefatigable energy that sees him soaked in sweat by the second song, The Wall Street Journal deemed him “The King of the Road” for good reason. “Touring, to me, is coming together with a bunch of people who all love this music to forget about whatever is bothering you, to shake off the problems and people who make your life what you don’t want,” says the man with 30 Billboard No. 1s, “and embracing everything great about living. “There’s nothing like the way a kick drum sounds when it hits you in the chest, or a guitar solo that just picks you up and throws you into a whole new energy. To me, that’s the best part of being on the road – and hearing that the Billboard Music Awards recognized us with this award last night, well, thank you so much from me, the guys in the band, the crew, the drivers and everyone else who makes it happen in this crazy world. We thank you, but especially we thank No Shoes Nation for bringing it every summer... They’re our secret weapon, so this award is for them.” Chesney’s Songs for the Saints 2019 Tour continues through May 25 at the Bayou Country Superfest. The show live from Louisiana State University’s Tiger Stadium will mark the 8-time Entertainer of the Year’s only stadium play in 2019.