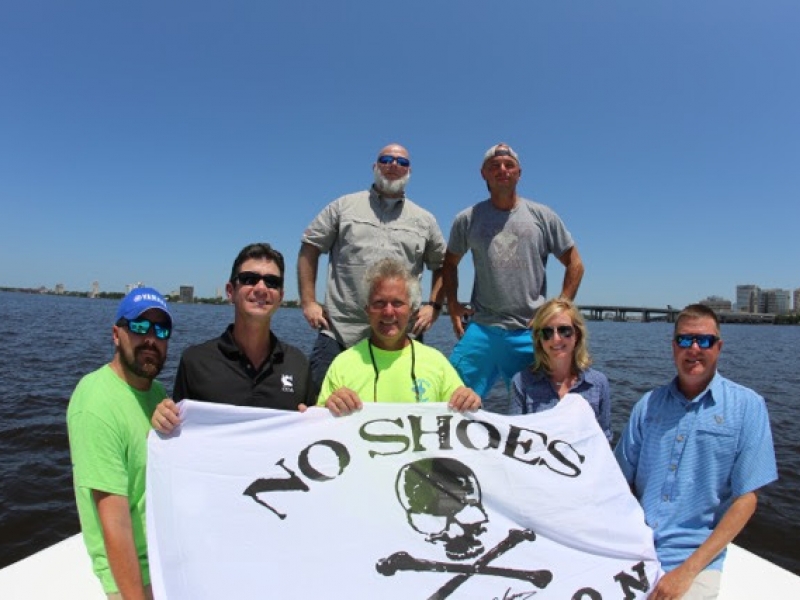 “It’s so easy to take the oceans and waterways for granted,” Chesney says. “What they were able to create here says a lot about the ways man can live not just in harmony, but supporting our natural aquatic resources. Beyond clean water, it is about supporting healthy marine life... and that includes being aware of the impact of erosion under the water.”

Thirteen-hundred tons of concrete was used to create the two reefs. In total, 18 barge loads were needed to carry the material to the two designated reef sites. Each reef measures 200’ x 200’ – and were built in a two-week time frame to minimize disruption.

“Looking at the underwater sonar, it’s amazing,” Chesney marvels. “In only 18 months, these reefs aren’t just alive, they’re thriving with life. As a guy who has so many of my happiest memories on the water, I couldn’t be happier to be a part of creating something like this in partnership with the City of Jacksonville, the people at the Coastal Conservation Association and the sales of my line of sunglasses with Costa Del Mar.

All these teams came together to do something really good for the world, and I love the idea that now two reefs are working to help strengthen the health of the river. When you protect that, you insure the survival of something integral for our survival, as well as nurturing an ideal habitat for marine life. I’m blown away by how this has grown.”

"The sky's the limit because there's so many places that  need healthy marine habitat," expressed Coastal Conservation Association President, Pat Murray. "We were just talking about the incredible life on this river and what this reef is doing to enhance that life. If we do that times ten or times 100 or  who knows, we can make a real difference for the health of our oceans."

Easily accessible by boats, the reefs provide a much-needed habitat and improved fishing in this section of the river, which is approximately 20 miles inland from the Atlantic. Drawing inspiration from life on the water, the 8-time Academy of Country Music/Country Music Association Entertainer of the Year hopes to insure the future of the oceans and beaches for generations to come.

“To get out on the water and float around something that started as a dream and a couple conversations about what to do with the money the sunglasses line had brought in, that’s powerful,” Chesney continues. “The proof is in the water, and I couldn’t be prouder of all the people who helped build it, the University of Jacksonville for studying it and everyone who contributed in so many different ways to make this a reality.”

Already announced as the headliner for the 2016 Florida Country Superfest, Chesney continues his 2015 Big Revival Tour this weekend with stops at Ava Amphitheater in Tuscon, Ariz. and The Joint at Hard Rock Hotel & Casino in Las Vegas, Nev.

About Coastal Conservation Association
The Coastal Conservation Association national habitat program, Building Conservation Trust, is dedicated to the creation and restoration of marine habitat throughout the U.S. Through CCA’s more than 125,000 members in broad-based state chapters, BCT has created successful collaborations of business, non-profit organizations, government agencies and private citizens to revitalize critical habitat and establish a vibrant foundation for the marine ecosystem.