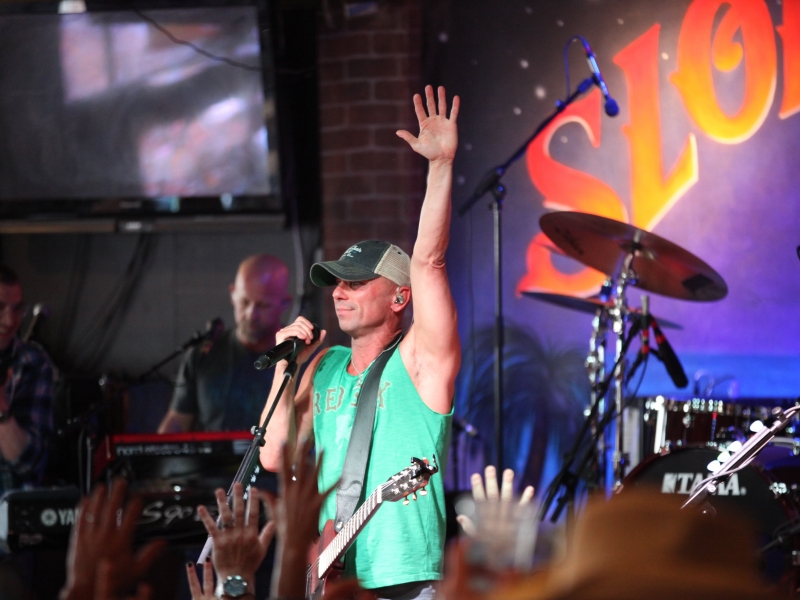 KEY WEST, Fla. (Monday, March 21, 2016) - Word started to spreadFriday: a keg show at Key West’s iconic Sloppy Joe’s March 21. Fans stood in line all night long, and by 6 a.m. Duval Street was blocked off for what local officials knew would be an overflow crowd that would shut the street down. By the time “Mas Tequila” rolled at 5:02, the fans were primed and ready as Kenny Chesney and band swung into “Beer In Mexico” with a vengeance.

A quick tumble down and through a blazing “Til It’s Gone,” a lilting “Summertime” and a reggae-undertowed “Pirate Flag” got the party off to a musically robust start with the crowd singing along as loud as the manThe Los Angeles Times called “The People’s Superstar.” Arms aloft, giant smile on his face, Chesney welcomed the so-far-beyond-capacity crowd with a witness about how much these keg shows mean.

“We’ve been off, and we’re getting to know each other again,” Chesney proclaimed. “Nothing gets us as in the mood to go out and play music for you all summer long quite like coming down to the Florida Keys and doing this show: old songs, new songs, we may even make up some songs before the night is over.”

Before it was over the night included Eric Church sitting in for several songs, including “Springsteen,” “Drink In My Hand” and a stripped down, Chesney-requested “Mr. Misunderstood.” Old Dominion’s Matthew Ramsey joined the eight-time Entertainer of the Year for The Big Revival’s three-week No. 1, “Save It For A Rainy Day,” which he co-wrote. In addition, Chesney and band covered a plethora of artists they revere: the Kinks’ “You Really Got Me,” Willie Nelson’s “Whiskey River,” John Mellencamp’s “Hurts So Good,” Stevie Ray Vaughan’s “Pride & Joy,” George Strait’s “The Fireman” and “Carried Away,” a double-time version of Alabama’s “Dixieland Delight” featuring Jon Conley on fiddle and a jubilant culmination of the Eagles’ “Take It Easy.”

From a young girl on her mother’s hip to NASCAR legend Dale Earnhardt Jr., NFL players to 4th Generation Conchs, an eclectic audience turned out for the (un)official kick-off of Chesney’s tour. Dressed in a sleeveless green Boston t-shirt, the night – which lasted more than three hours – felt as good to the East Tennessean as it did to the crowd.

“There is nothing after several months off,” Chesney said after the show. “Like coming together, hitting a bar and just playing ’til we wanna drop, to remember every single thing you love about music: how it feels, what it means, the way it charges people up. There is no feeling like it, and to do it with friends, fans and the No Shoes Nation, well, it tells me it’s time to get out there and start rocking America.”

Chesney’s Spread the Love Tour kicks off April 23, where it will be the first concert at Auburn’s Jordan-Hare Stadium. On Thursday, March 24, Chesney’s “Noise,” about the sonic and mental overload of today’s world, hits radio hard. With a special Facebook event slated for 3:45p CT/ 4:45p ET, Chesney is just getting started on the year ahead.