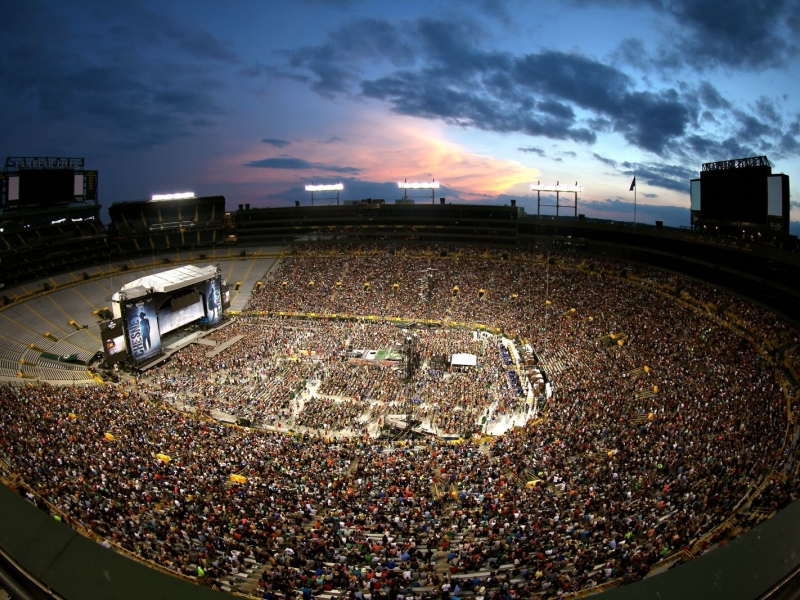 Grace Potter Surprises Fans for “Wild Child,” “You And Tequila”

They Surprise Potter with 53,363 Singing “Happy Birthday” on a “Magical Night”

GREEN BAY, Wis. (June 21, 2015) -- The flooring and stage started being built Monday… The traffic advisories began Wednesday… When Kenny Chesney rolled into historic Lambeau Field Saturday, June 20, Green Bay was more than ready for the man The Wall Street Journal hailed as “The King of the Road” and his The Big Revival Tour. The second time he’s taken over the historic home of the Green Bay Packers proved to be an unforgettable evening.

By the bridge of “'Til It’s Gone,” the set’s fourth song and his 26th #1, the 8-time Entertainer of the Year was soaked in sweat, the audience swaying and singing with total abandon. “I’ve waited all week,” he told the record-breaking crowd of 53,363 people, “to be right here… in this place… because right now, we’re together. The music matters, life matters, you matter – and we’re going to celebrate that together tonight!”

Over 24 songs, Chesney brought the crowd to threshold after threshold, celebrating life as it’s lived in the flyover and the power of loving where you making every moment count. From the giant No Shoes Nation Skull & Crossbones waving during “Pirate Flag” to Kenny Greenberg’s searing guitar solo on “Somewhere with You,” it was all surging energy and riotous applause.

Bringing surprise guest Grace Potter in a black leather mini skirt out, he explained the day was special because “a couple days ago, I got to call Grace Potter and tell her not only are we playing Lambeau Field, we have a #1 record.” That set up the week’s chart-topping “Wild Child” as a sea of hand-lettered placards were thrust into the air. It was followed by a particularly heart-tugging “You And Tequila,” all whispered regret and desire.

As “You And Tequila” faded, a 5-tiered cake was rolled from the wings down the T, along with a giant margarita. Chesney – the only concert to play Lambeau Field two times – then led the crowd of 53,363 strong through singing “Happy Birthday” to his frequent duet partner.

“To be able to surprise Grace like that? Talk about awesome. We have had so many adventures, made some really great music… The look on her face hearing that crowd sing was beyond any gift I could’ve given her, and no one appreciates the fans more.”

Later in the set, Green Bay Packers head coach Mike McCarthy joined Chesney for the set closing celebration of high school heart and spirit “The Boys of Fall.” Signing a Packers helmet, McCarthy helped the East Tennessean give the special memento to a young girl.

“Some nights are just magical,” Chesney said later. “That show was like an out of body experience: the crowd was right there with us… The band was so hot and in the zone… I felt completely connected to everyone in the stadium. It’s the kind of night you hope for every time, and spend your whole career chasing: nights when the songs, the fans, the band and you are one.”

The only country artist in Billboard’s Top 10 Touring Acts of the Last 25 Years, Chesney’s been tearing up stadiums all summer. He’s broken his own record at Pittsburgh’s Heinz Field with 55,381, and prompted The Dallas Morning News to opine “Two parts Mick Jagger, one part Bruce Springsteen and one part Billy Graham” after his AT&T Stadium show.

“There are times it all just feels right,” Chesney enthused. “Green Bay, Lambeau Field, those fans who’re all heart and passion: that’s why I fell in love with playing years ago. When people see their lives in your songs – and throw that energy back, there’s nothing like it.”