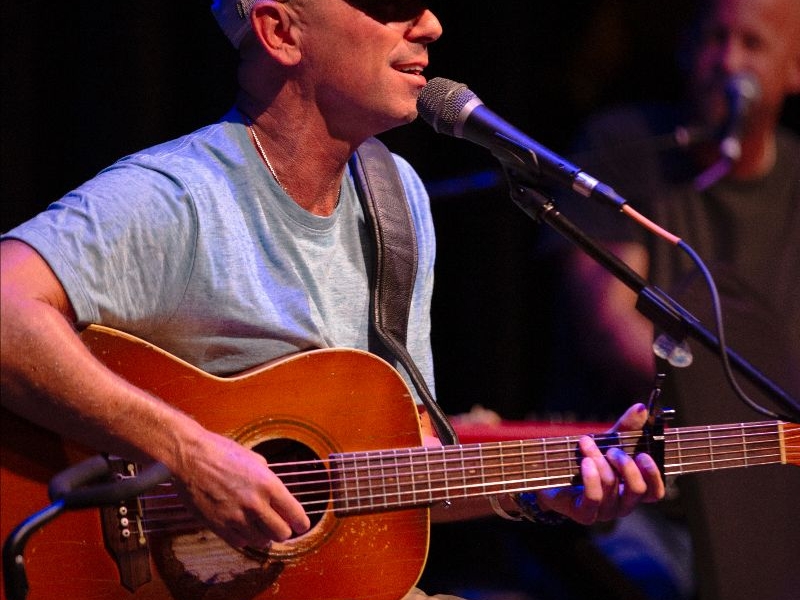 SiriusXM and Pandora’s Small Stage Series Concert/LIVE Broadcast Stands as E. Tennessee Superstar’s ONLY Live Show of 2021Intimate, Personal, One of a Kind...

NASHVILLE, Tenn. – When Kenny Chesney walked onstage at the intimate Key West Theater in the historic town where Florida ends, it had been 29 months since the eight-time Entertainer of the Year played a show for No Shoes Nation. With two guitarists and a keyboard player, the quiet songwriter/superstar settled in a chair with an acoustic guitar and absorbed the power of the moment.

Though used to commanding stadium-sized crowds, when the 200 people in the storied theater chanted “We Do” in all the right places in the night’s second song, Chesney found another gear: the gear of euphoria. In a rare night of songs focused on his more introspective, unplugged side, the focus of his SiriusXM and Pandora Small Stage Series performance was his awareness-raising Songs for the Saints and newer material the world had not been able to experience live.

“So many of the songs that are close to my heart would get lost in a stadium,” Chesney explained earlier in the evening. “They’re songs from one heart to the world, and you need to really listen and take in the words, so they’re songs I don’t get to do very often... And tonight, in this place with so much history for so many writers, I’m going to go to those places.”

In warm voice, the man the Wall Street Journal deemed “The King of the Road” opened with faith in the wreckage “Song for the Saints.” Keeping his word, the first seven songs contained many Chesney rarities, several performed for the very first time. Beyond Songs for the Saints’ wistful “Pirate Song” and whimsical “We’re All Here,” he told the story of enlisting Ziggy Marley for “Love for Love City” and introduced “Better Boat” by explaining, “I’d never had a song about healing before.”

Not that the show was somber. Though seated throughout the 100-minute set, the man in the sea green No Shoes Reefs t-shirt laughed, joked with the crowd, told stories, promised songs you’d know from the stadiums – including a rousing spontaneous singalong “Get Along,” a grooving “When The Sun Goes Down,” a life-affirming “Save It For A Rainy Day” and a deeply impacting “Here and Now.”

Drawing on the richness of influences, he played Guy Clark’s stoic “Hemingway’s Whiskey,” the title track to his 2010 album, and the classic country waltz “Knowing You,” his current Top 10 single, introduced by saying, “These kinds of songs are the reason I moved to Nashville.” Though known for his high-energy stage shows – he is the only country artist on Billboard’s Top Touring Acts of the Last 25 Years for the last 15 years for a reason – the songwriting piece of Chesney’s soul is often missed.

Late in the set, after many singalongs, stories and songs, Chesney surveyed the room, weighed the moment and spoke of the power of places like this. Noting how these rooms shape dreams, forge friendships and provide the setting for so many of life’s sweetest memories, he offered the night’s emotional center: his deeply personal Life On A Rock crowning “When I See This Bar.”

“When we walked offstage at Tiger Stadium in Baton Rouge in May of 2019, I couldn’t have imagined it would be three years between those times I listen to No Shoes Nation pregaming on a Saturday afternoon. Hearing their voices singing back to me tonight...it makes you realize how precious life, friends, music and these connections truly are,” shares Chesney.  “I love that we played some songs I’m so proud of that I never get to sing; but what really struck me tonight was how these songs – even the ones people have never heard on the radio – hold people’s lives. To me, that’s what music is all about: finding those things about who we are, experiences that we all share no matter where you come from or who you are.”