KENNY CHESNEY STADIUMS BOSTON: I Am SO Ready 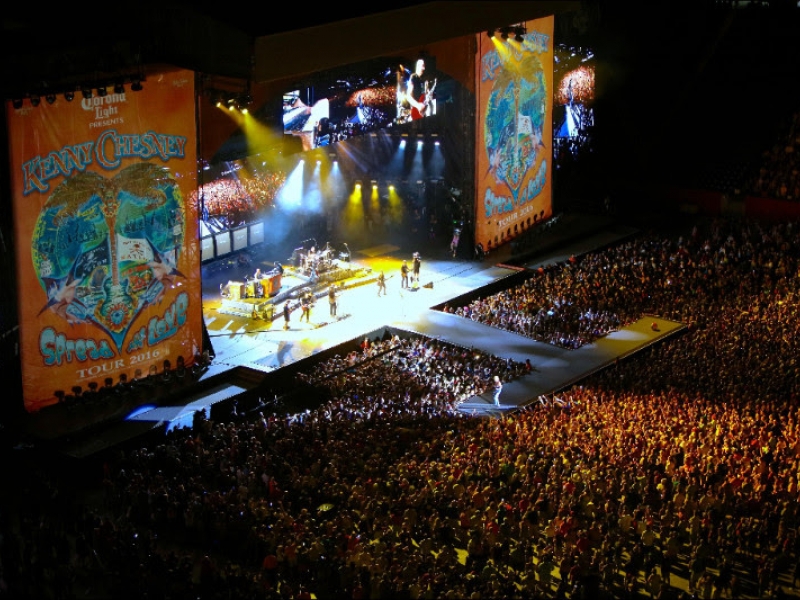 FOXBORO, Mass. -- When Kenny Chesney hit the parking lot at Gillette Stadium, he could feel his pulse accelerate. After closing his Spread The Love Tour with 121,399 fans over two nights at the home of the New England Patriots, the 8-time Entertainer of the Year hasn’t been on a stadium since. For the man who traditionally plays to upwards of a million fans each year, that kind of absence definitely makes the heart yearn for the connection.

“Because I know No Shoes Nation is gearing up for this as much as we are,” Chesney said during a pause in the band’s stadium-sized rehearsal, “I am standing on this T, looking out at the empty Gillette Stadium and hearing all the cheers from last year echo in my head.”

After walking offstage last year, Chesney offered, “This is why we do this, this right here. To play for people who love music so much, who commit so completely to what’s in these songs, who scream and shout and cheer like these fans! When you can find fans like that, you wanna do even better than you think possible… and with the No Shoes Nation, who we named right here, it reallydoes inspire us to reach for new heights, possibilities…”

The only country artist to be in the Top 10 of Billboard’s Biggest Touring Acts of the Last 25 Years actually added a few shows to his initial “off year” line-up to be ready for this weekend’s return to Foxboro. With the stage now in, Chesney and team are working to add more seats for his only stadium-sized concerts in 2017.

“I’ve always said: I want everyone to be able to come rock with us who wants to be part of the fun, of the music, of the moment,” Chesney began. “To me, it’s about what we all share together whenme and the guys are up on that stage. It’s the music, the people, the emotions. It’s been something we’ve been sharing in Boston since long before we played Gillette for the first time in 2005 – and I think it’s the reason No Shoes Nation got named there, and has a flag waving in the end zone just like all the Superbowl pennants!”

With Live in No Shoes Nation, due October 27, capturing a decade’s worth of special moments from the man The Los Angeles Times deemed “The People’s Superstar,” this weekend’s shows should embody all the power, all the passion that multiplies itself when No Shoes Nation sets up its tents, comes together and sings the songs of -- as the song “Please Come To Boston” says --   “the man from Tennessee.”

“It’s been a year, and I am so ready,” Chesney raved. “Whoever you are, if you’ve got tickets, come ready to feel this music, to rock hard and have more fun than you’ve had all summer. We’ve saved up all year for this; and the band and I are bringing everything we’ve got! I can’t wait… and it’s now only a matter of hours, not days and weeks!”