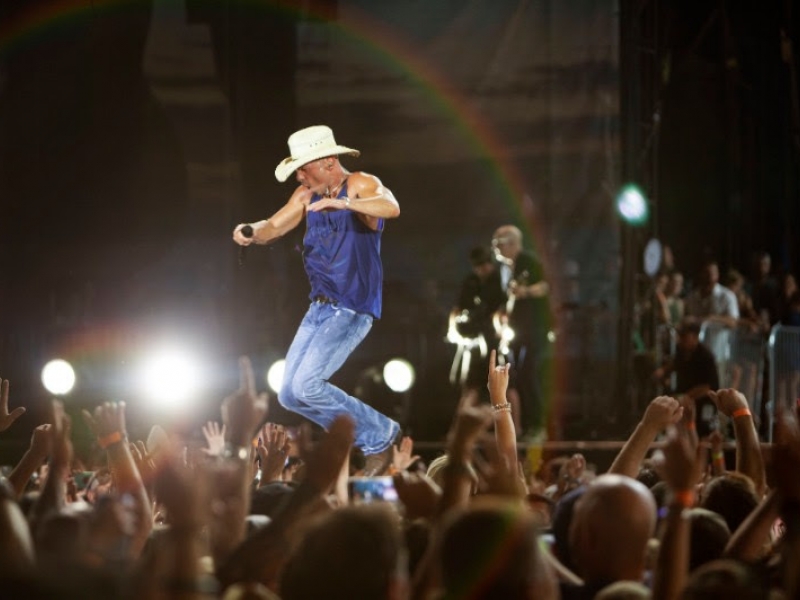 Focusing on smaller venues and markets not directly impacted by his massive stadium tours, Kenny Chesney sought to make his Songs for the Saints 2019 Tour mirror the intimacy of its namesake album. Inspired by the resilience of the people around him, Chesney doubles down on the human connection for his 2019 tour by seeking those members of No Shoes Nation who have spent the past decade and a half making the trip to stadium markets for what is now a summer tradition.

“No Shoes Nation rocked me so hard last summer,” Chesney says of his record-shattering Trip Around the Sun Tour, “and they reminded me how much more these songs become when you play them for the people who live inside them every day. I love everything about the members of No Shoes Nation, so to change things up, I thought, ‘Why not bring the music to them?’”

The songwriter/superstar from East Tennessee whom Variety called, “Country music’s only true long-term stadium act” and The Wall Street Journal deemed, “The King of the Road” announced 11 arenas in what, for an artist who does 18, 19, 20+ stadiums a year, might seem like outlying markets. With the response being so strong, he adds another half-dozen cities beyond the obvious to his Songs for the Saints 2019 Tour.

“We have played the stadium in Louisville several times, but in really looking at this notion, I wanted to give them something more intimate,” Chesney explains. “This tour is going to really feel like a club show – and put the music front and center. It’s why we’re going to Oklahoma City, Albany, Lincoln and Jacksonville next year. Go to No Shoes Nation, and bring them the songs where they live.”

Setting and often breaking his own records with 2018’s Trip Around the Sun Tour – including over a million fans at Foxborough’s Gillette Stadium and becoming the single biggest-seller at New Jersey’s MetLife Stadium – the 8-time Country Music Association and Academy of Country Music Entertainer of the Year took his time deciding how he wanted his 2019 tour to roll out. Having merged amphitheaters with 19 stadiums, it was a block buster year. Rather than do more of the same, Chesney decided to do something totally out of the box.

“We know how to do stadiums, and we love the rush of those shows,” allows the man who just notched his 30th No. 1. “But you never want to get to where you take it for granted, or you’re so used to it, it’s just what you do. There’s a real intimacy even in arenas that you don’t have in a stadium, and it’s something we’ve not had for a while. To me, it’s a whole other canvas for us – and I’m psyched about it.”

Kicking off April 4 at Louisville’s KFC Yum! Center, the tour will move aggressively through May. Designed for markets that may not have stadiums, but still have lots of heart, Songs for the Saints 2019 Tour reflects the personal sentiment that defines the album of the same name.