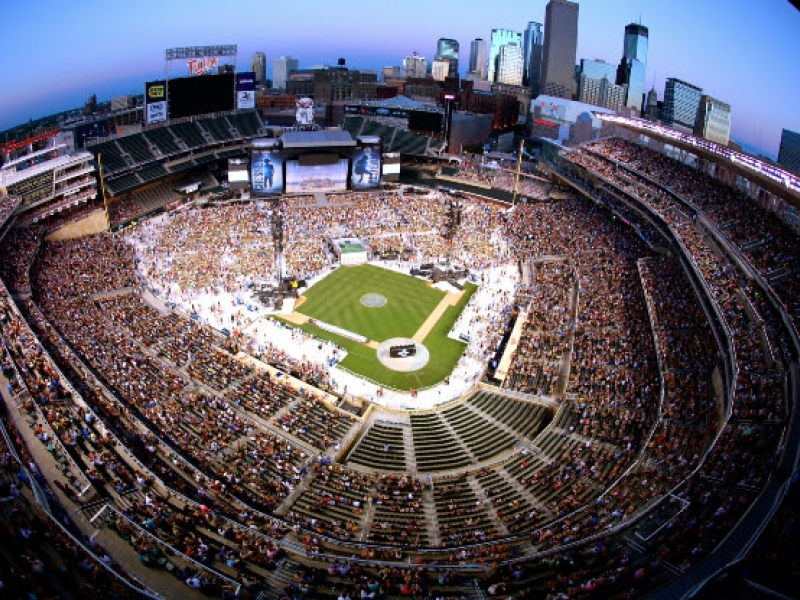 Minneapolis, MN (July 19, 2015)-- In 2012, Kenny Chesney set the record at the Target Field with 42,542 fans rocked. In 2013, the 8-time Entertainer of the Year broke that record with 43,940 fans played to – a number even Sir Paul McCartney couldn’t topple when he played there last summer. But on the first night of a two night stand, the man The Wall Street Journal called “The King of the Road” set the record again, playing to 44,152 fans for a new single night record with tonight’s show already almost sold out.

“This has been the most amazing tour,” Chesney said. “Every week, it seems like the fans are louder, more alive, more inside the songs – and as someone who wants to connect with every last fan, right up to the top back of the stadium, that’s the best feeling in the world! I can’t believe how in the moment tonight’s audience was, and I can’t wait for tomorrow to do it all again.”

Setting and breaking records has been a major part of The Big Revival 2015 Tour. He’s broken his own record at Pittsburgh’s Heinz Field with 55,381 fans played to, Green Bay’s Lambeau Field with 53,363 and Philadelphia’s Lincoln Financial Field with 54,313. That velocity prompted The Dallas Morning News to opine of Chesney’s live appeal, “Two parts Mick Jagger, one part Bruce Springsteen and one part Billy Graham” after his A.T.&T. Stadium show.

“It feels like the momentum and the music are driving everything,” Chesney acknowledges. “Sometimes the songs just take over, and they take you where they want to go. It’s a combination of the amount the band and I have played together, how hungry the audience is to see us and the way we try to include every single person! I have made touching every single fan the reason for what we do – and tonight it sure felt like we got that done.”

With another show at Minneapolis’ celebrated Target Field tonight, Chesney is doing the hard-to-imagine in Minnesota this weekend. He will repeat the unthinkable notion next weekend, when he plays Pasadena’s legendary Rose Bowl on July 25, as well as upcoming stadiums shows at Detroit’s Ford Field on August 22 and a pair of shows at Foxboro’s Gillette Stadium on August 28-29 that will bring Chesney’s number of stadium plays to a career total of 135.

“Taking a year off, there are no guarantees,” Chesney says, “so every night when we hit that stage, I am grateful to hear how loud the No Shoes Nation is! If 2014 gave me the chance to really invest in the music that became The Big Revival, it also let me really take what the show can be to another level. It’s leaner than it’s ever been, and that gives the band and these songs the chance to really stand out – and it feels like the people feel it the same way we are.”