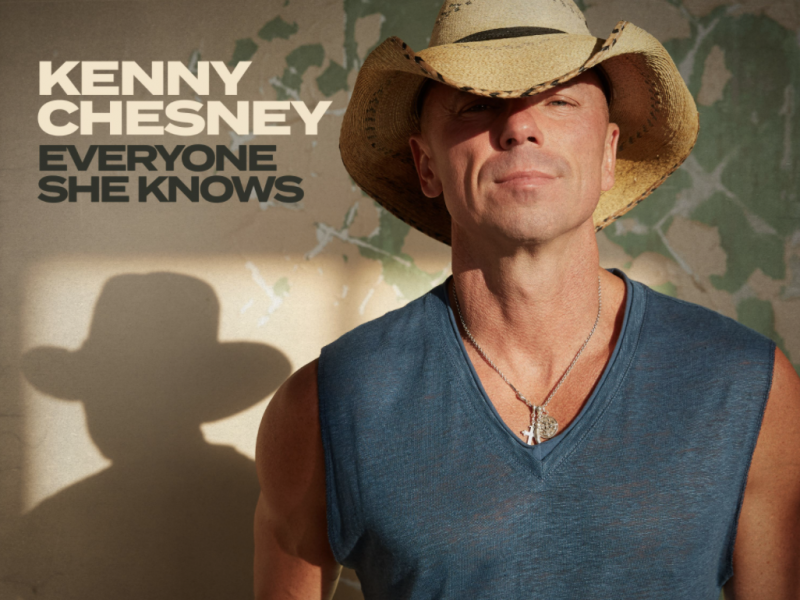 Follows No. 1 Country Waltz “Knowing You” with a Freewheeling Female
“She’s Marilyn in blue jeans, with a touch of Jackie O...”

NASHVILLE, Tenn. — Fresh off his 34th career No. 1, “Knowing You,” a classic country waltz that toasts the love who got away, Kenny Chesney returns with the summery “Everyone She Knows.” With chiming acoustic guitars, bright melody and a straight 4/4 rhythm, the East Tennessee songwriter/superstar offers another femme-forward slice of modern country.

“I love this woman,” he says. “She’s found a life that works for her, and it’s maybe not what her friends are doing, but it works for her. There’s this idea that you get married, settle down and your life is made; but the woman in ‘Everyone She Knows’ is still out there, living life on her own terms, chasing her dreams and trying to balance that with what people seem to expect.”

“Everyone she knows is getting healthy / She still smokes a couple when she drinks...” offers the second verse in a classic chasing-the-night-versus-settling-down truth, while the chorus laments, “She’s bored with all the boys / The men are too damn old.” More than anything, somewhere between 17 and domestic glory, she’s still loving the freedom of being young and on her own.

Written by Shane McAnally, Ross Copperman and Josh Osborne, “Everyone She Knows” is a pushback on who young women are told they’re supposed to be, while offering a clear-eyed look at the reality of growing up. With Whiskey Riff’s Samantha Steinmann, self-described as “a 26-year-old (almost 27),” writing of “Everyone She Knows” when Here And Now was released, “This song is legit… One minute you’re all drinking beers at the bar together to the next minute, you’re miscommunicating beer bottles and baby bottles... there’s also something profound about learning who you are as a person. At the end of the day, there is no timeline on how life should go.”

Chesney has built a catalog celebrating free spirits, self-directed and self-possessed women from the No. 1 “Wild Child,” featuring Grace Potter, the teen driving off in the seven-week chart-topper “There Goes My Life,” summer love in the classic “Anything But Mine,” to the heroines of islands records “Boston,” “Sherry’s Living In Paradise,” “Happy on the Hey Now (A Song for Kristi)” and album cuts “On the Coast of Somewhere Beautiful” and “The Road and the Radio.”

“I think there’s nothing as awesome as a woman living life the way she wants to,” Chesney marvels. “To see someone so in love with life, so in love with the adventure, out there doing it? That’s an incredible thing. I know so many women who are their own compass... and this song is for them. Wherever you are, however you are, just love the adventure and don’t worry what people think.

“The bridge goes, ‘She goes out on Saturday night / She comes home late, she don’t have to fight / And she thinks, ‘Ain’t got it all, but I got it alright...’.’ That pretty much says it all. In a world that isn’t perfect, no one should judge anyone, but especially a woman, for making the most out of life.”

With his Here And Now 2022 Tour stadium dates already on sale – and the rest of the shows on the verge of being announced, the eight-time Entertainer of the Year and only country artist in the Top 20 of both Billboard and Pollstar’s Top Touring Acts of the Decade, Chesney is ready to take all of this new music to No Shoes Nation.
Kicking off April 23 at Tampa’s Raymond James Stadium, it’s going to be a summer like no other after almost three years between tours – and with “Everyone She Knows” hitting, it will be extra special for young women of all ages.