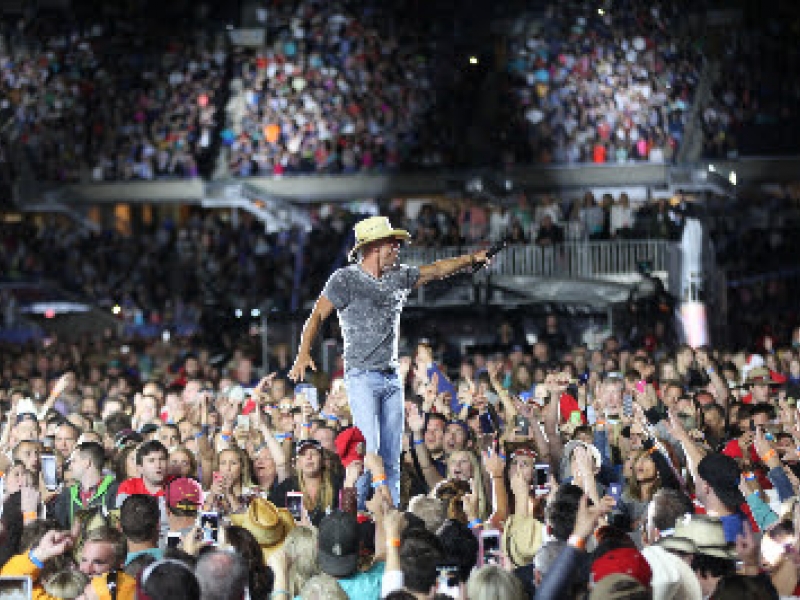 Chicago, IL:  Kenny Chesney’s been tearing it up at the stadiums this summer with The Big Revival 2015 Tour.  He’s broken his own record at Pittsburgh’s Heinz Field with 55,381 and prompted The Dallas Morning News to opine “Two parts Mick Jagger, one part Bruce Springsteen and one part Billy Graham” after his Texas/AT&T Stadium show.

When Chesney flew over the heads of the assembled Chicago fans, the roar was so deafening, it almost drowned out Chesney’s vocals on the surging “Drink It Up.” In spite of unseasonable temperatures that saw plenty of polar fleece among the sundresses, the crowd was warmed up and only got hotter as the show went on. The 8-time Entertainer of the Year even joked, “I tried to dress for the weather... I wore sleeves.”

“It was amazing to me, cold as it was, how loud and how hard Chicago brought it,” the songwriter/gale force performer marveled after the show. “To play somewhere as historic as Soldier Field is truly an honor – and I think about it every time we’re there – but to have that audience who’re so wild and willing to share the music, that makes it one of those shows every single tour.”

Making her one appearance on The Big Revival 2015, Miranda Lambert thrilled the crowd with her high velocity hit-packed set. But the Grammy-winning vocalist really thrilled the crowd when she came back out to sing “You and Tequila” with Chesney -- as the cell phones aloft filled the stadium. Their voices entwined with such a savory sweetness, the pair decided to do another – a palpably electric, molasses-paced take on George Strait’s “Carried Away.”

“Miranda is a fine artist and a world class singer,” the East Tennessean said. “To be able to sing with her on ‘You and Tequila’ was amazing, because of the grit she brings with the sweet. After that, we couldn’t do just one. And man, there’s a woman who loves George Strait as much as I do, so she understands the core of what ‘Carried Away’ is all about.”

Referencing how appreciative he was to the fans coming out when the Blackhawks were in the Stanley Cup Play-offs, the audience was marked by No Shoes Nation flags, young women on their boyfriends’ shoulders and a lot of signs for “Wild Child,” which Chesney performed a stark acoustic rendition of on his weathered acoustic guitar before his band kicked in.

“Maybe it was the year off, but every night we’ve gone out, the band and I can really feel the crowd: their energy, their passion, the way they live these songs as much as love them. It knocks the breath out of you a little, hearing the way they sing something like ‘Anything But Mine’ or ‘I Go Back’ to you... And I hope the No Shoes Nation knows that feeds us and pushes us to really take this music ever further.”

With four nominations for the CMT Video Music Awards – Video of the Year and Male Video of the Year for “American Kids,” Collaborative Video for “Wild Child” with Grace Potter and CMT Performance of the Year for “American Kids” from “Instant Jam” filmed at the historic Georgia Theater in Athens, GA, the man The Wall Street Journal called “The King of the Road” will perform on the live telecast June 10 on CMT. Then he heads to Charlotte, NC June 11 before hitting Atlanta’s Georgia Stadium June 13.