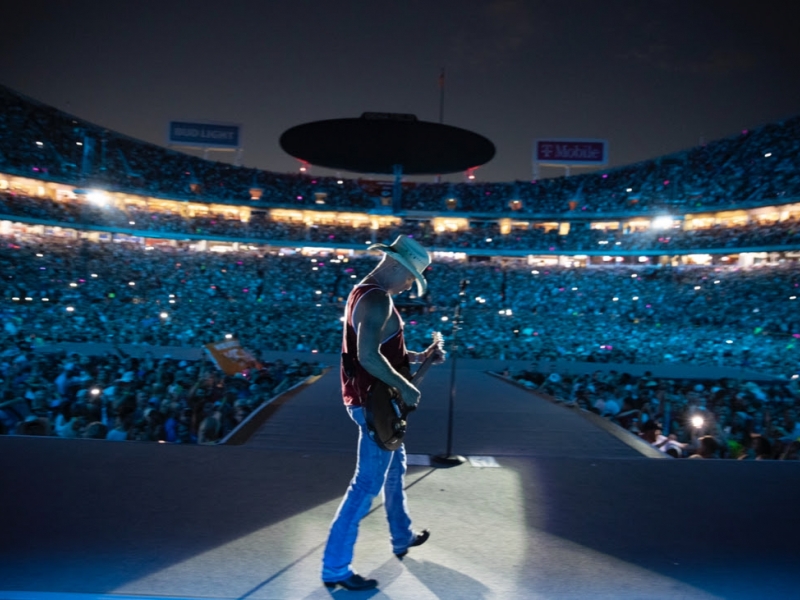 KANSAS CITY, Mo. – It’s been four years – and over 1,000 days – since tickets went on sale, yet No Shoes Nation has shown up and shown out with a passion unlike any other time for Kenny Chesney’s Here And Now 2022 Tour. Having already shattered another record last week at Chicago’s Soldier Field, the four-time Country Music Association and four-consecutive-time Academy of Country Music Entertainer of the Year was coming into his seventh Arrowhead Stadium concert hot.

“Kansas City has always been a market where the fans come ready to sing, to scream, to make it a night to remember,” Chesney said after the show. “So, any time we’re playing here, we know it’s going to be unbelievable. But once again, I am blown away by how much heart, how much passion the fans have brought to what has been a major part of how No Shoes Nation came to be – and to continue building into the most amazing group of people I’ve ever encountered.”

From the first crowd-raising measures of “Beer In Mexico” through the final play-off of the groove-heavy “She Thinks My Tractor’s Sexy,” the crowd was on their feet, throwing their arms from side-to-side and often taking whole choruses of the songs on their own. Whether the reveling “We Do,” the worry-eschewing “Everything’s Gonna Be Alright,” originally a duet with David Lee Murphy, or the four-way power torque of “Living In Fast Forward,” “Young,” “Noise” and “American Kids,” the celebration mode remained in high gear for the crowd of 57,852 – besting Chesney’s 2018 personal record – after several hours in the sun.

Writing on Twitter directly after the show, Chesney posted, “So much of what has happened to us on the road started here. And it still feels the same. So connected because you care about this music and the experience of it all. Arrowhead, last night was so magical and I thank you.”

He expanded on that thought backstage, explaining, “It’s easy to say ‘I’ve seen it.’ Or for someone to feel like, ‘You know, there’s just so much going on...’ But every time we’ve gone to Kansas City, it feels like it’s the first time I’ve been there – and the way the fans sing along, you can tell how many of them have lived these songs in their own lives. That’s a pretty strong feeling: hearing people sing their lives back to us in these songs.”

As in many stadiums this summer, the man The Los Angeles Times called “the People’s Superstar” has kept the focus on the music and the feelings it generates. In the home of the Kansas City Chiefs, “Boys of Fall” offered a reverential turn on the No. 1 smash that honored the dignity and commitment of high school football players as well as the tender unexpected turns of “There Goes My Life” and the swaggering call to No Shoes Nation “We Do.”

Heading into Bozeman, Montana for a first ever play at Bobcat Stadium, Kenny Chesney’s Here And Now Tour 2022 seems to be gathering momentum, magic and even more members of No Shoes Nation. Presented by Blue Chair Bay and fueled by MARATHON, it’s already been a long hot summer – and it shows no signs of slowing down between now and its August 26-27 finish at Boston’s Gillette Stadium.