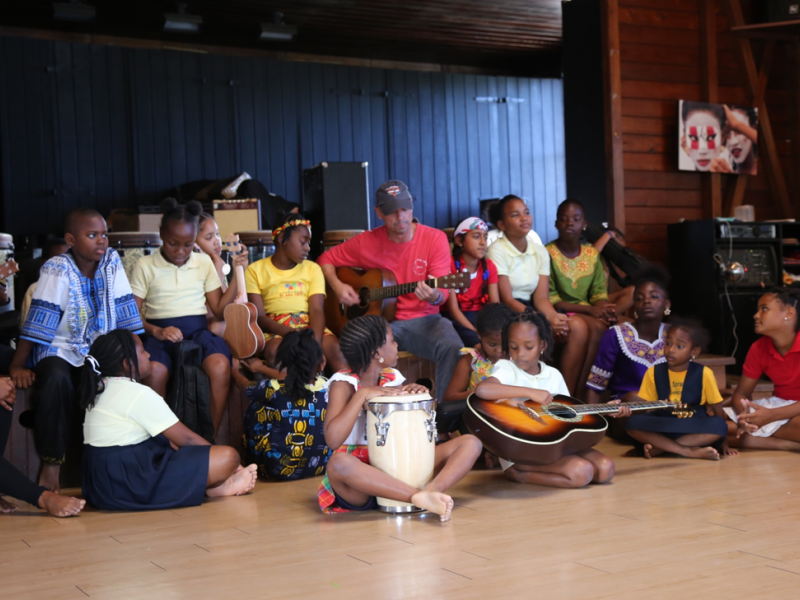 Chesney’s charitable work is far-reaching, if something the man deemed “The People’s Superstar” by The Los Angeles Times has opted to do quietly. His Love for Love City Foundation helped spearhead the rebuilding of St. John, following the devastation of Hurricanes Irma and Maria in 2017. In addition to humanitarian aid and working with local teams to facilitate physical clean-up and rebuilding, he and his core staff worked to rescue and relocate 2,000+ displaced animals of St. Thomas and St. John to several no-kill shelters and loving families in the U.S.

The East Tennessean also put his music where his mouth is, writing and recording the critically-acclaimed Songs for the Saints. All his proceeds from the album, which featured Ziggy Marley, Jimmy Buffett and Mindy Smith, went to the Love for Love City Foundation. Raising over $1.1 million to date, Songs continues to generate funds for St. John’s ongoing reconstruction work. Chesney also filled the St. John School for the Arts with a bounty of musical instruments, to inspire the children to go to school and be creative as they recovered from the disaster.

Songs for the Saints generated the multiple week No. 1 “Get Along,” an anthem Chesney felt spoke to the spirit of people coming together post-devastation. Having already been involved with two successful PassItOn.Org campaigns with “Spread the Love” and “The Good Stuff,” the life-affirming organization requested an unprecedented third collaboration. “Get Along,” focusing on people of all ages, races and occupations, has surpassed 2.5 billion views.

Seeing the bombing at the Boston Marathon, Chesney again embraced action. Working with the Boston Medical Center, he created the Spread the Love Fund to benefit amputee survivors, by selling special edition t-shirts as well as creating a place for donations, including turning a “Good Morning America” Summer Concert appearance into a fundraising opportunity. To date, Spread the Love has accrued over two million dollars – and the beneficiaries, as well as first responders, can often be seen at Chesney’s Gillette Stadium shows.

His ongoing commitment to ocean habitat conservation as a whole extends from his years spent on the water. No Shoes Reefs has helped rebuild coral reefs in Jacksonville, FL, as well as supported other local ocean ecology efforts around Florida and the Gulf Coast.

CRS/CRB Board President, Kurt Johnson commented, “It’s as if this CRS award was created for Kenny Chesney. Artists with his career span are rare. Among them, artists who do as much good as he does, for as long as he has, without calling attention to it, are particularly singular. Here’s to you, Kenny.”
“I was raised to lend a hand where I could, but also to reach out quietly and keep the focus on the people who need the help,” says the soft-spoken East Tennessean/artist. “I've always tried to do the right thing where I could, but this award really belongs to all the people I've met over the years who are rebuilding their lives, their homes, their world. Watching them come together – the courage, the hours and strength they give to these things – my award is getting to be inspired by what these people have accomplished.”
The CRB Artist Humanitarian Award was created in 1990 by the organization’s board to honor those Country music artists who have exhibited exceptional humanitarian efforts during their career. Past recipients include Blake Shelton, Dierks Bentley, Lady Antebellum, Carrie Underwood, Rascal Flatts, Tim McGraw and Faith Hill, Trace Adkins, Randy Owen, Toby Keith, Brad Paisley, Brooks & Dunn, Reba, Vince Gill, Garth Brooks and Charlie Daniels, among others.
Registration for Country Radio Seminar is currently $599 per person and is available for purchase at www.CountryRadioSeminar.com. Tickets to the New Faces of Country Music® show are already sold out, and no longer available for purchase with registration packages. Additionally, CRS host hotel, Omni Nashville, is accepting reservations. For more information, visit www.CountryRadioSeminar.com, and follow CRS on Facebook, Twitterand Instagram. Additional information can be obtained by calling 615-327-4487.

About Kenny Chesney
Kenny Chesney has been heralded as “Country music’s only true long-term stadium act” by Variety and “The King of the Road” by The Wall Street Journal. With 30 No. 1 hits including “Get Along,” “American Kids,” “When The Sun Goes Down,” “I Go Back,” “Noise,” “Pirate Flag,” “Boys of Fall” and over 32 million albums sold, he’s the 21st century’s soundtrack for coming of age in the heartland. His commitment to his fans – known as No Shoes Nation – made Chesney the only country artist on Billboard’s Top 10 Touring Acts of the Past 25 Years, consistently playing NFL stadiums across the US. That commitment to giving his fans songs that connect on the radio, as well as at the 8-time Entertainer of the Year’s record-shattering shows, reflects the passion fueling the East Tennessean.