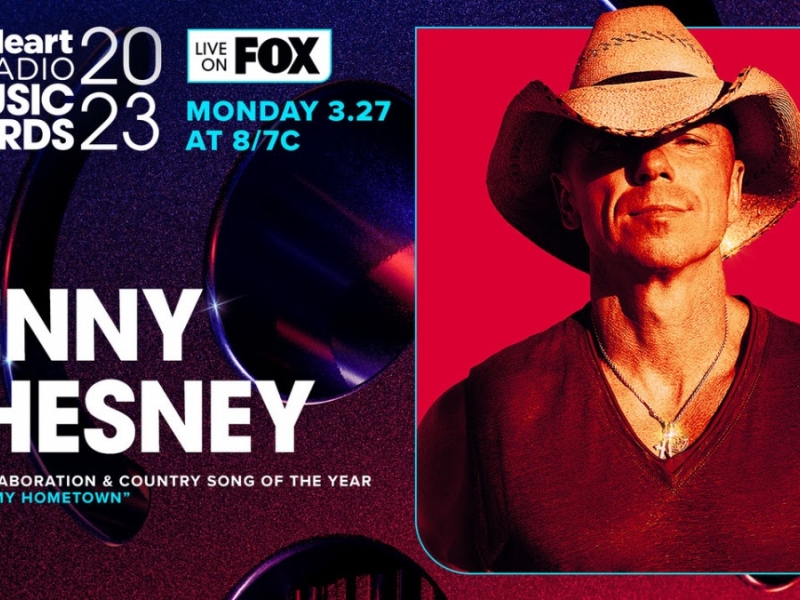 “half of my hometown” Is Up for Best Collaboration, Country CollabBringing the Full-On East Tennessee I Go Back 2023 Tour Mates to the AwardsMultiple CMA Award Winner Takes on All-Genres for the First Time

NASHVILLE, Tenn. – They have won the Country Music Association Vocal Event and Video of the Year for “half of my hometown,” as well as being nominated for the CMA Single of the Year, but Kelsea Ballerini and her East Tennessee influence Kenny Chesney never expected to see themselves nominated alongside Elton John and Dua Lipa, Post Malone featuring Doja Cat, Lil Nas-X and Jack Harlow, Post Malone and The Weeknd, Megan Thee Stallion and Dua Lipa, Sam Smith and Kim Petras, Future featuring Drake and Tems, Elle King and Miranda Lambert or Doja Cat featuring the Weeknd. But that’s right where their heart-rending “half of my hometown” has ended up with this morning’s iHeartRadio Music Awards nomination announcements.

With the I Go Back 2023 Tour mates starting to get ready for their March 25 kick-off at the Bryce Jordan Center in University Park, Pa., it was a surprise they didn’t see coming. But it’s also a distinction they’re honored to have received for a song that says a lot about coming up outside the major cities.

“Until you leave, you don’t really understand the pull of where you’re from,” reflected Ballerini, also a quadruple Grammy nominee, including for this year’s Best Country Solo Performance. “It’s a song that’s so much where I’m from – and as much as I’ve explored a lot of genres with so many interesting artists – I think that feeling of being torn is something people, especially ones with big dreams, know regardless of what kind of music they listen to.”

“Post Malone? Dua Lipa? The Weeknd? Doja Cat?” Chesney marveled. “That is both amazing company and a testament to the truth a good song can contain. Remembering the way I felt driving down I-40 West, chasing the dream, I knew as soon as I heard that first chorus when Kelsea texted it to me that this song had every last drop of how much you miss where you’re from, but all the reasons you have to keep going. I love that iHeart recognized the power of that emotion and that song. It makes me wonder how many of the other nominees know just how ‘half of my hometown’ feels, too.”

“Music has taken me so many incredible places,” Ballerini added. “It’s brought so many people into my life from pop, alternative and contemporary music, but singing with Kenny is going home. I love that people could hear what I heard. He was the only voice for ‘half of my hometown,’ and when he comes in, it’s just like hitting the Knoxville city limits.”

With “Better Version,” her steamy collaboration with FLETCHER, already making waves, the Platinum-certified Ballerini continues exploring the myriad styles of music, while retaining her strong commitment to being a woman whose songs reflect life as she and her peers live them. That candor and willingness to share her hurt, hopes and moments has made her one of Nashville’s most sought-after voices.

Having played to over 1.3 million fans on his Here And Now 2022 Tour, including 21 NFL stadium plays, Chesney embodies the ability to connect with others. Recognizing Ballerini’s willingness to be true to herself when he was seeking a special guest for a very special tour that returns him to the kinds of towns both grew up in, she was the natural choice.

Since taking her debut “Love Me Like You Me It,” follow-up “Dibs” and “Peter Pan” all to No. 1 on the country charts, a trifecta that matches Wynonna Judd’s solo emergence in the ‘90s, the fresh-faced and fashion-forward songwriter/vocalist has drawn on her own coming of age for some of modern music’s most personal songs, songs so true they transcend labels – and are now side-by-side with pop’s biggest names.

Written with Ross Copperman, Nicolle Galyon, Shane McAnally and Jimmy Robbins, “half of my hometown” reflects Ballerini’s journey, but also so many young people’s way of seeing the world around them.

The I Go Back 2023 Tour is presented by Blue Chair Bay Rum. Tickets are on sale now via KennyChesney.com.