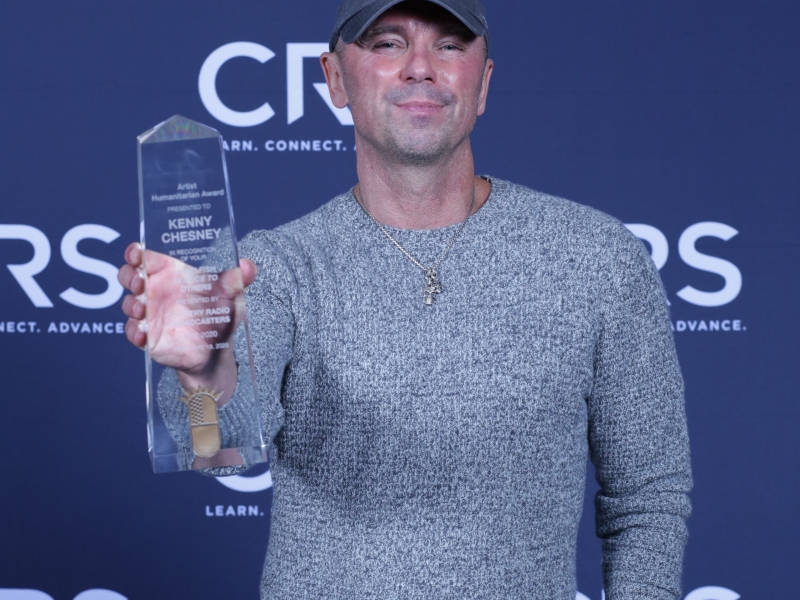 Kenny Chesney has always eschewed recognition for the many good works and charitable things he’s been a part of. On the back end of the deeply personal Songs for the Saints with its multiple week No. 1 “Get Along,” Chesney agreed to be honored with the Country Radio Broadcasters’ Humanitarian of the Year Award – so he could share the love and the gratitude with so many people who helped the soft-spoken songwriter superstar.  “I have to tell you, I have a lot of emotions standing up here,” Chesney told the standing room only crowd of over 1,000 at the Country Radio Seminar opening luncheon. “I am embarrassed and uncomfortable, but God has given me the gift of communicating with people through music... and that’s given me a unique platform to help, especially with the Virgin Islands, with Songs for the Saints, which was written in the moment and came from the heart. “You know, I’d heard ‘One Love’ by Bob Marley my whole life, but when you’re under that kind of stress, to see everyone coming together to rebuild and help? I got to see what that song was in action. What was really amazing were so many people who didn’t really have anything, and the way they gave. You didn’t have to be a musician, like me, or a politician, like Mike Bloomberg, to make a difference, and the people did.” For the man The Los Angeles Times deemed “The People’s Superstar,” caring defines the essence of No Shoes Nation. Whether his own Spread the Love Foundation, which benefitted amputee survivors of the Boston Marathon bombing, or Songs for the Saints and the Love For Love City Fund to provide disaster relief to the U.S. Virgin Islands after Hurricanes Irma and Maria or Drew Brees’ Dream Foundation, MusiCares, St. Jude, Matthew McConaughey’s Just Keep Living Foundation, the Smoky Mountain fire recovery, Music & Memory for Alzheimers patients, the Salvation Army’s Red Kettle Drive, Farm Aid and countless others, giving back is a privilege for the kid who grew up in East Tennessee. After thanking Warner Music Nashville label head John Esposito for his support, Chesney turned the gratitude to the people at country radio. “In 2018 when we were out doing our stadium tour, and last year, so many of you came out. Everyone wanted to talk about the relief and what we were doing (with the recovery work). I don’t know about other formats, but country has always been a family – and when somebody in the family hurts, we all hurt. I felt that. It gave me a lot of energy to get out there on the road, to get onstage.”  Currently in the studio finishing his next album, Chesney took time from mixing to be part of the annual Warner Music Nashville Luncheon. He also took time to recognize the work his assistant did to spearhead the rescue of over 3,000 animals, mostly abandoned pets left by families who couldn’t get them out, from St. John and St. Thomas as part of Love for Love City efforts. “Without her, the people of Tortola, across New England, animal rescues and shelters all over Florida, it wouldn’t have happened. And now all those animals have homes.”