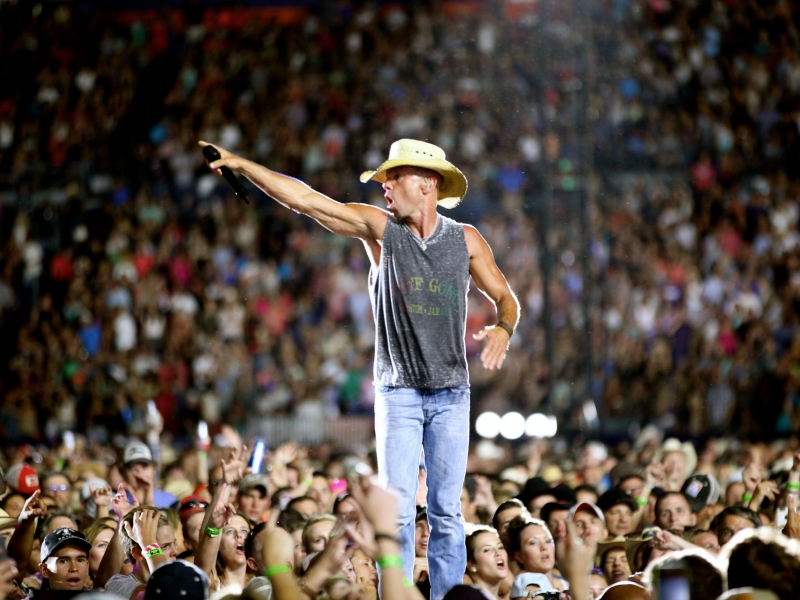 NEW YORK, N.Y. – (Dec. 15, 2015) - When Kenny Chesney took his 2015 The Big Revival Tour on the road, he wanted to rock as many people as humanly possible. With just 57 dates, albeit 23 stadiums, the man The Wall Street Journal called “The King of the Road” was the only country act making Billboard’s Top 5 Touring Acts of 2015 – alongside Taylor Swift, One Direction, U2 and the Rolling Stones.

Beyond the dollars, Chesney played to the third highest number of fans – 1,335,022 – after list-topper Swift’s 1,982,076 for 71 shows and No. 2 One Direction's 2,337,938 for 80 shows. Summer after summer, the 4-time Country Music Association and 4-time Academy of Country Music Entertainer of the Year remains focused on rocking the No Shoes Nation for all they’re worth.

“Every year when we hit the road, I’m trying to figure out how to bring it harder, play more music and make it a night the people who live their lives in the songs will remember,” says the high-impact songwriter who’s sold in excess of a million tickets each of his 13 headlining tours since 2002. “We’ve been doing this enough years, that you know you have to really bring it to just compete with what you’ve already done. And it’s about the music you’re making now, as well as the ability to bring it when you hit the stage every night.”

Hailed as “Two parts Mick Jagger, one part Bruce Springsteen and one part Billy Graham” by The Dallas Morning News, Chesney’s The Big Revival broke nine records this summer – including several of his own – one being 120,206 fans over two nights at Gillette Stadium, marking his 12th and 13th show at the home of the New England Patriots.

“People want to rock, to have a good time and forget their problems,” Chesney explains. “But they’re not looking to mindlessly spend the night. They come to remember the moments that mattered to them – and maybe make a few more memories in the process – and I’ve been lucky that my songs have reflected how the No Shoes Nation lives their lives on every level.”

Having a new record that yielded four consecutive No. 1’s doesn’t hurt. In addition to the GRAMMY- and CMA-nominated, multiple-week No. 1 “American Kids,” he had “Til It’s Gone,” the CMA Musical Event nominee “Wild Child” with Grace Potter and the three week chart-topper “Save It for a Rainy Day,” all songs that show his creative fire matches his unrelenting passion for his near legendary live shows.

“Making records is incredible,” Chesney offers about the music’s spark. “But it’s onstage where the connection happens and the spark pops. You take the songs out to the fans, and you realize how much they mean. When you bring all you’ve got, and they throw even more energy back at you, there’s nothing like it! We don’t tour for this kind of recognition, but it’s sure nice to know when you have fans as committed as the No Shoes Nation, they’re being recognized for how much they bring to our tours! They fly all over… meet up… and I’m thrilled to be part of it.”