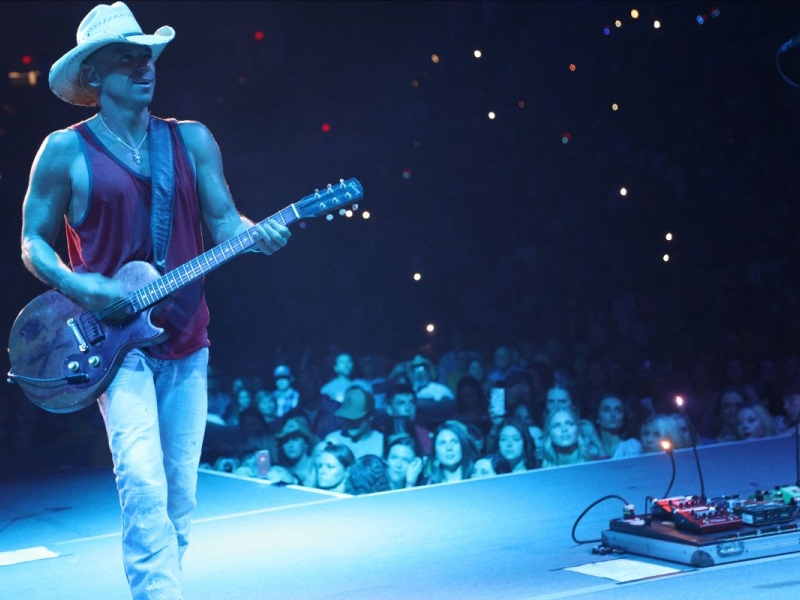 NASHVILLE, Tenn. - Having been named Billboard’s #1 Country Tour, Kenny Chesney and his three-years-in-the-waiting Here and Now Tour arrive at #5 for Total Gross and #3 for Tickets Sold/People Played to in authoritative touring trade POLLSTAR’s Year End issue. Being the highest-ranking Nashville artist, he also becomes the #1 country tour.

For total gross, with his fan friendly prices, Chesney lands behind Bad Bunny, Elton John’s Farewell Tour, the Def Lepard/Motley Crue stadium extravaganza and Harry Styles residency-heavy world tour in fifth place. As often is the case with Chesney’s tours, when measured by fans played to, the East Tennessee songwriter/superstar comes in at #3, behind #1 over all Bad Bunny and the hard-rocking Def Lepard/Motley Crue tour.

“It’s always wild when I see the company we’re keeping in the POLLSTAR Year End charts,” Chesney said, reacting to the news. “You sometimes wonder if the other acts even know who we are, and then I think, ‘But it doesn’t matter, because No Shoes Nation does – and that’s who we go out there to play for!’"

“So, to me, not only is this an incredible honor – especially considering how many different kinds of music we’re talking about – but it’s an incredible honor for everybody in No Shoes Nation who came out after a thousand days in some cases to rock with us. They sang louder than they ever have, threw so much love and positive energy our way – and reminded all of us how powerful music can be to bring us all back together.”

Having recently enjoyed a massive spate of gold, platinum and multi-platinum certifications from the RIAA and his just announced I Go Back 2023 Tour – designed to bring the euphoria of Chesney’s live shows to those markets Chesney started out in – almost sold out, his connection with the citizens of No Shoes Nation has never been stronger. With a passion for capturing life as it’s lived between the coasts, as well as life on the water, Chesney has forged a community who live their lives in the songs he sings.

While Chesney couldn’t believe it had been four years since he and his band stood in many of America’s NFL stadiums – Here and Now saw the man the Wall Street Journal called “the King of the Road” creating seats and moving the stage back multiple times for many of the shows.

“I can still hear the diesel engines, the generators and especially the sound of No Shoes Nation singing ‘I Go Back,’ ‘American Kids’ and 'Anything But Mine.'" Chesney says. “Maybe because we’d been gone so long, it felt important to come back with everything we had, plus a little more. I know we’ve never felt that much love walking offstage each night. I hope every single person who came out and made this tour so special got the same feeling we did, because it was awesome.”