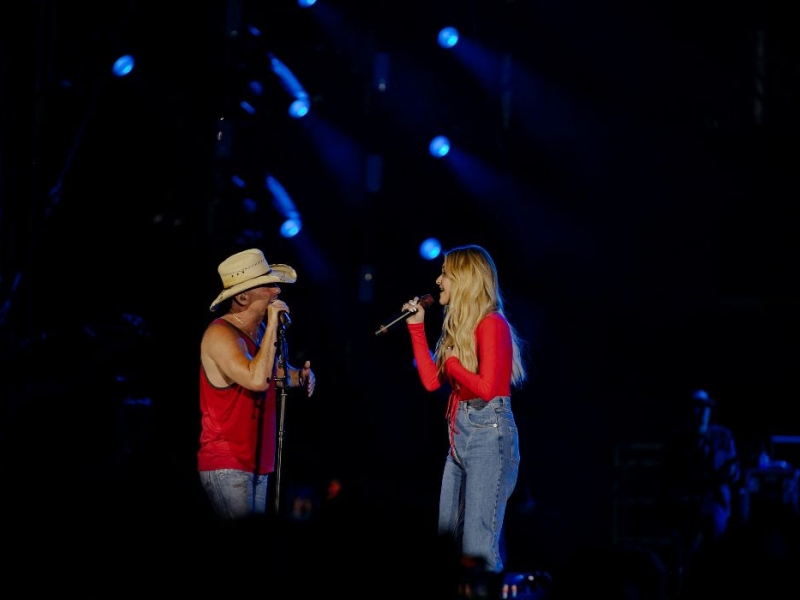 NASHVILLE, Tenn. -- When Kenny Chesney got on the highway “with a head full of dreams and a heart full of songs,” he was carrying the torch for every kid just like him. Singing about life in the flyover, capturing the small moments, the real thrills, the revelations, he forged a bond with his audience – ultimately named the No Shoes Nation – Chesney became the only country artist on Billboard’s Top 10 Touring Acts of the Last 25 Years every year for the last thirteen.

Onstage at Nashville’s Nissan Stadium that love was more than apparent – with the audience singing extra choruses of “American Kids,” “Young” and “Anything But Mine.” With perfect weather, the audience helped lift Chesney to a new high in what has been a summer of pitch perfect shows; giving the audience back the innocence and beauty of a simpler world before touring stadiums became an impossible proposition.

Bringing out Old Dominion’s Matt Ramsey and Brad Tursi for “Save It For A Rainy Day,” it was a master class in maintaining one’s perspective on those days that try people’s reality. But the real emotional center came when Kelsea Ballerini, dressed in jeans, a red t-shirt and sparkle high tops, was introduced to sing their No. 1 hit “Half of My Hometown.”

For Ballerini, the Country Music Association Vocal Event and Video of the Year Award winner spoke to the realities one must transcend to get where she had dreamed of since she was a child. Though people don’t always understand or buy in, there is only love for where you come from. Partway through the second verse, she broke down sobbing – and as Chesney pulled her into a hug, the audience burst into applause.

Back on the road after three years unable to play stadiums, Chesney has found a new gear as an entertainer: bringing passion and recognition of how actual people live into a much more powerful truth. “Everything’s Gonna Be Alright,” “Don’t Happen Twice,” “Pirate Flag” and “Beer In Mexico” offered an exuberance that rippled through the audience during the two-plus hour set.

“Being here in Nashville where so many dreams came true, seeing Kelsea on the verge of making the same kind of mark, it made me realize how strong this connection is. It’s not just fun or hooks or guitar riffs, it’s one massive heart that we all share,” Chesney said after the show. “To have that is the greatest gift, greatest reason for doing this – and tonight really hit me in the soul.”

Here And Now 2022 Tour is presented by Blue Chair Bay Rum and fueled by MARATHON.