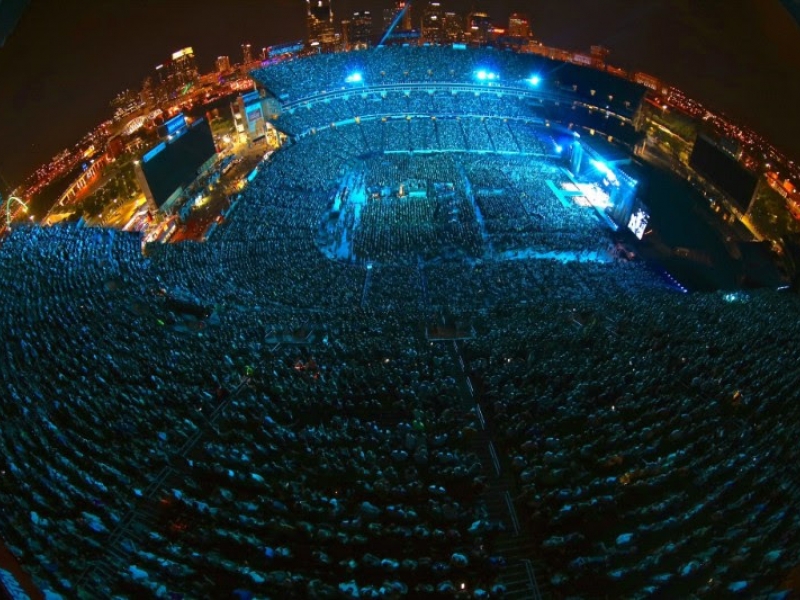 Kenny Chesney came into Nashville’s Nissan Stadium with two No. 1s in the space of three weeks – sharing David Lee Murphy’s “Everything’s Gonna Be Alright,” then hitting the top of the Country Singles chart for two weeks with his own “Get Along” – and the No. 1 selling debut Songs for the Saints. Anticipation was such that the Tennessee State Highway Commission opened the currently closed for repaving and repair traffic loop for the I-40/24 and I-40/65 splits to ease the burden of traffic for country music lovers attending Nashville’s Trip Around the Sun Tour stop.

It was a smart move. Not only did the only country artist on Pollstar’s Top 10 Tours at Mid-Year deliver two high energy hours that included “American Kids,” “Noise,” “Young,” “No Shoes, No Shirt, No Problems” and “Get Along” – he broke One Direction’s 2014 record of 54,249 with 55,182 fans in the home of the Tennessee Titans.

“There’s a special energy that happens when you’re home,” Chesney said of the show. “This one’s for the people who know you, your team, where these songs come from. When they sing the chorus of ‘American Kids,’ you can feel they know that song in a whole other way – and it’s incredible to hear that much passion and energy coming at the stage.”

In a summer of shattering his own attendance records, Nashville continues the trend on his 2018 Trip Around the Sun Tour. With 19 major stadiums, plus a handful of amphitheaters, the man the LA Times hails as “The People’s Superstar” is among Taylor Swift, the Rolling Stones, Jay-Z and Beyoncé, Bruno Mars, U2, Justin Timberlake, the Eagles and Pink as the year’s big tours.

“When we hit that stage, you could feel No Shoes Nation was all in from the first notes of ‘Beer in Mexico’,” Chesney explained. “They leaned into the music, they sang louder in places than we did. Mostly, they had fun, and you could see it on their faces, feel it onstage. When an audience gives that much, you bring it that much harder.”

The charge between the songwriter/superstar and the audience isn’t just a live equation. Songs for the Saints, which benefits the Love for Love City Fund, topped the Country Albums chart and was the biggest selling debut on the Top 200. On the heels of the record-breaking “Get Along,” Chesney’s 30th No. 1, which made him the artist with the most No. 1s in the history of Billboard’s Country Airplay Chart, breaking records seems to be the order of the summer.

The man who’s also the only country act in Billboard’s Top 10 Touring Acts of the Last 25 Years recognizes the bond. “These songs are life. For the people who come every summer, whether they love rock or whatever, they’re gonna feel the music, but they’ve lived these songs.  For me, it’s the artists who make me feel something, whose music is part of my life that I go back to. That’s what I try to give the fans every night onstage.”

Starting with a no-holds-barred set at Tampa’s Raymond James Stadium with 55,292 fans and running through last weekend’s trip to Ford Field in Detroit, the songwriter/superstar from East Tennessee has been breaking his own attendance records at almost every stadium this summer. With fan-friendly pricing, a high energy show and just enough people coming together to create a real community beyond just the concert experience, Chesney remains the “must” rite of summer for so many.

“Music is medicine, and it’s energy, and it’s fuel,” says the man the Wall Street Journal dubbed the "King of the Road." “To me, when music is really firing, it can help you do impossible things, lift you out of unthinkable problems and give you a reason to keep going. I hope the fans who come get as much out of the shows as everyone in my road family gets out of the energy and love No Shoes Nation throws at us every night.”

Heading into MetLife Stadium this weekend, the 8-time Academy of Country Music and Country Music Association Entertainer of the Year is celebrating the release of his deeply personal homage to the Virgin Islands, Songs for the Saints. Begun as Hurricane Irma was pummeling the Caribbean islands where he’s made his home, the song cycle celebrates the spirit of the land, the people and the living that inspired so much of his music since the 5-times platinum No Shoes, No Shirt, No Problems.

“I don’t do this for the awards or the competition. I do this to write my life and share it with others. When you realize how much you share, whether it’s ‘Get Along,’ or the way a show on a hot summer night makes you feel, that’s what all this is for: coming together. It’s why Songs for the Saints matters, because No Shoes Nation can live inside that world – and also with buying the record, knowing that money is helping rebuild those islands.”