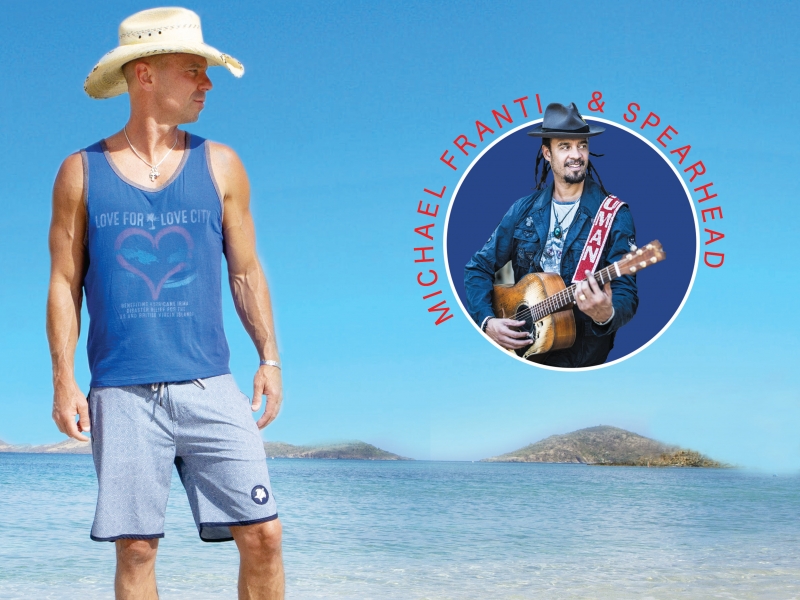 Nashville, Tenn. – For Kenny Chesney, the Chillaxification Tour is as much a state of mind as it is over two hours of high-energy songs that have defined the lives of No Shoes Nation. With 22 stadium shows already announced, the only country artist to land in Pollstar’s “Top 20 Touring Artists of the Decade” is also going to dial things back for 18 amphitheater shows with his good friend Michael Franti & Spearhead.

Having started his headlining career at West Palm’s Coral Sky Amphitheater, the eight-time Entertainer of the Year kicks off his more intimate plays where it all began on May 7, with another summer of stadiums to be threaded throughout the more up-close shows.

“As crazy and awesome as the stadium shows are – and there’s nothing like them – there is a vibe to the amphitheater shows that only happens in those places,” Chesney says. “You look out at the lawn, you see everybody coming together, singing the songs – and it’s this community that feels so close.”

Hailed as “country music’s only long-term stadium act” by Variety, the songwriter/superstar from East Tennessee has found that blending the stadiums with the amphitheaters provides a balance that gives both types of venues an extra bit of energy, with that juxtaposition keeping the shows dynamic and No Shoes Nation engaged.

“I think everyone likes when we change things up,” laughs the man called “The People’s Superstar” by The Los Angeles Times. “The shows are different. We make sure we play all the same songs, but there’s a looseness in the amphitheaters – and with only two acts, there’s also a different kind of intensity. Bringing Michael Franti & Spearhead is going to keep the energy up in a big way, and No Shoes Nation is going to really love them.”

Having defined the country music stadium experience over the last decade and a half, Chesney spent 2019’s Songs for the Saints Tour taking his music to the cities that have been overlooked on his massive, million-tickets-a-summer treks. In the spirit of making the music available to fans beyond the stadiums, he’s again leaning into several strongholds with amphitheaters for Chillaxification 2020.

“There’s been so much speculation about which cities we were going to hit for these smaller shows,” Chesney explains. “I figured we should go ahead and let people know where we’re gonna be. I know folks make plans, and rather than make people guess, it just makes sense to go ahead and let you know.”