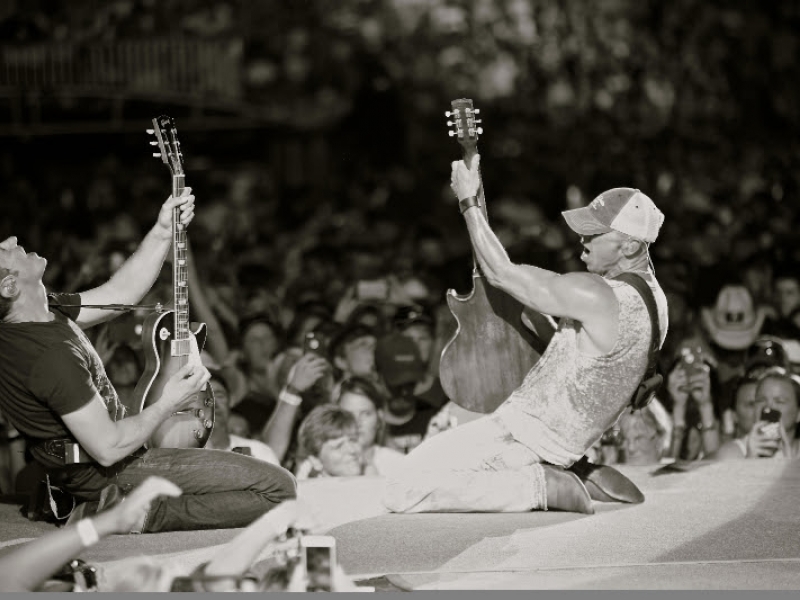 Kansas City, Mo. (August 2, 2015) -- The traffic on I-70 was backed up for well over an hour going both directions. The parking lots were flooded as soon as they opened the gates. It should’ve been obvious before the tickets were tallied something special was going on; but for fans coming to Arrowhead Stadium forKenny Chesney’s Big Revival, it seemed like it was the annual rite of summer for the No Shoes Nation.

But when the tickets were counted, Chesney had shattered Pink Floyd’s 1994 record of 56,134 with 57,368 in attendance. This year’s show marked Chesney fourth headlining stand at Arrowhead Stadium.

“I had no idea about the number when we took the stage,” Chesney marveled when he was told. “Pink Floyd are rock icons. Every kid’s high school experience… I never ever would've thought something like that could happen. We’ve been coming to Kansas City for years, and they’ve always been really loud audiences. But when we hit the stage, it felt like all those years, all those shows were added up into one – and that was what we were being hit with.”

Chesney, who attended practice with the Kansas City Chiefs on Friday, was clearly in the zone. Hailed by The Dallas Morning News as “Two parts Mick Jagger, one part Springsteen, one part Billy Graham,” the man who’s broken his own record at Pittsburgh’s Heinz Field, Green Bay’s Lambeau Field, Philadelphia’s Lincoln Financial Field and Minneapolis’ Target Stadium for the third time recognized the night was special before he even hit the stage.

"I could hear the cheers when the intro film was running,” Chesney said. “It was so loud, I could barely hear the music – and from the very first second I was out there singing, the audience was electric! It felt like being at the bottom of a mountain, and an avalanche just kept rolling over you. The energy, the heart, the passion had that much force and it didn’t let up – not once all night."

The crowd took over on the songs-watermarking-life “I Go Back,” then came back with a deafening response to his 27th No. 1 “Wild Child.” They were also loud and proud on the long gone summer love “Anything But Mine” – and brought “American Kids” to a whole other threshold.

“Kansas City took ‘American Kids’ to a whole other place,” Chesney explained. “They made it their own. But they took over a bunch of the songs – and it was awesome. When you’ve played somewhere for several years, and the passion grows, that’s what you’re trying to create. It’s the best part of what we do up here. And man, Kansas City just leveled me. Every show we’ve ever played, all the way back, they hit us”

There are plenty more stadiums to come: Denver’s Sports Authority Stadium at Mile High Aug. 8, E. Rutherford, NJ’s Met Life Stadium Aug. 15, Detroit’s Ford Field Aug. 22 and a double at Foxboro’s Gillette Stadium Aug. 28-29. Those shows will take the only country act on Billboard’s Top 10 Touring Acts of the Last 25 Years to 135 stadium plays since 2005. Having taken a year to get ready for The Big Revival 2015 Tour, Chesney hit the road with a real passion – and the fans have absolutely reciprocated in kind.