Kenny Chesney Breaks His Own Record in Philly 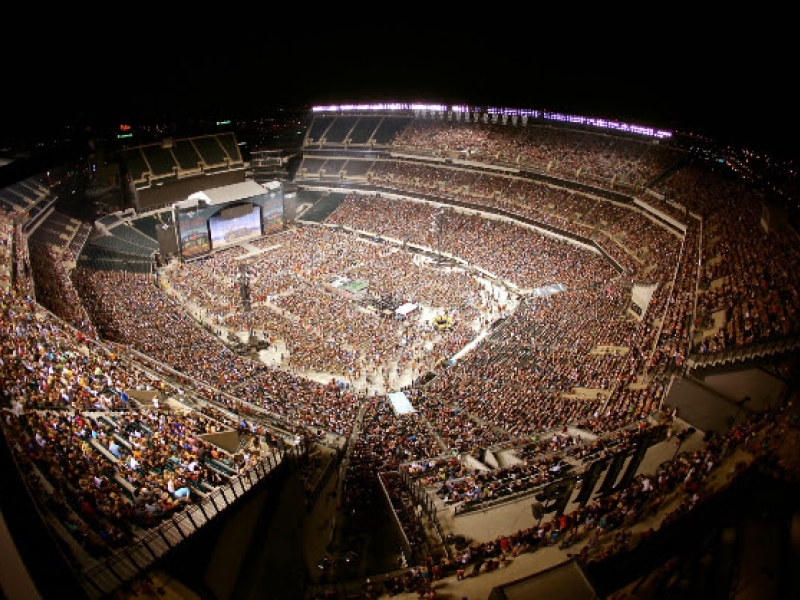 PHILADELPHIA, Pa.: Kenny Chesney’s been playing Philadelphia’s Lincoln Financial Field almost as long as he’s been headlining summer stadium tours – and the thrill is anything but gone. On his 8th appearance at the home of the Philadelphia Eagles, the man who’s won 8 Entertainer of the Year Awards broke his own record for a single night country music show, selling 55,131 tickets to his Big Revival 2015 Tour. “It’s funny,” marvels the high energy performer “when you go back to markets in this size venue tour after tour, you wonder if people are ever going to get tired of the big show, the long day – and listening to the crowd last night, they were as alive, as loud, as crazy about the music as they were in 2006 (the first time he played there). “Someone said we could’ve sold 15,000 more tickets easy, which seems crazy,” he continues, “only I heard that crowd. When they cheered, when they sang along, we could hear them onstage over all that instruments – and that’s saying something! Because, honestly, when a crowd’s feeling it, you can’t deny it, and when they’re not, that’s pretty obvious, too.”

Clocking in at just under two hours, Chesney played all three of the #1s from The Big Revival – the GRAMMY-nominated multiple week #1 “American Kids,” the sweeping invitation to live in full “Til It’s Gone” and the free-spirited female homage “Wild Child” – as well as songs from across his career. Midway through the set, good friend Eric Church, who also appeared on the bill, joined the East Tennessean for an acoustic-driven and powerfully pensive “When I See This Bar,” as well as a turbo-charged romp through “Livin’ In Fast Forward.”

Like “Save It For A Rainy Day,” Revival’s fourth single that was country radio’s most added single in its first week, the music continues to drive Chesney’s career to new heights. A song to remind people they can choose to surrender to what’s bothering them or enjoy the day, the sold out crowd at Lincoln Financial Field seemed to be living every word of the mid-tempo that advises, “The sun’s too bright, the sky’s too blue/ Beer’s too cold to be thinking about you/Gonna take this heartbreak, tuck it away/ Save it for a rainy day.”

“Even before I got onstage, I could tell the No Shoes Nation was in full possession of that song. Where the buses were parked, we could get some of the tailgating noise, and a sense that people were creating a day to remember out there in the parking lots. That’s always been the point with my music: gather your friends, kick back and enjoy the moment. Sometimes it’s all you got, but all you got is plenty. Maybe that’s why after eight straight tours, it’s still growing.

“The folks in Philly really brought it. When I heard the crowd before we got out onstage, when the pre-tape is rolling, you knew friends were made, fun was had – and the reason they’d come out was more than met. After all these years, that’s everything about why I do this.”

The Big Revival 2015 Tour -- with 23 stadiums over the summer – continues breaking Chesney’s own records. The only Country Artist on Billboard’s Top 10 Touring Acts of the Last 25 Years did it in Pittsburgh and Green Bay already; and he’s gearing up for two nights at Minneapolis’ Target Field July 18-19 and Foxboro’s Gillette Stadium August 28-29. Maybe that’s why The Dallas Morning News tagged him, “Two parts Mick Jagger, one part Bruce Springsteen, one part Billy Graham.”