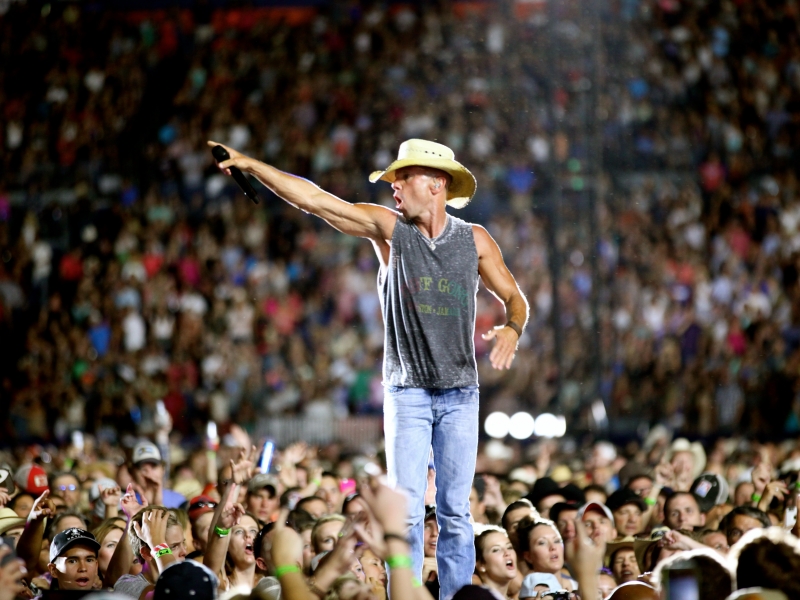 FOXBOROUGH, Mass. – Kenny Chesney can’t get enough of Boston. With his Aug. 25, 2017 show at Gillette Stadium not even on sale yet, the buzz surrounding the 8-time Entertainer of the Year’s only stadium appearance of 2017 is so strong that a second show is being added. Tickets for both the August 25 and August 26 shows will go on sale Friday, Dec. 2 at 10  a.m. EST via www.ticketmaster.com.

“I can’t believe we’re doing two shows,” says the man who named his rabid fan base the No Shoes Nation at Gillette Stadium during his Brothers of the Sun Tour. “I said I was going to take some time and lay low, but obviously a summer without Boston just isn’t the same. And when they came back asking about another show due to the response and said, ‘You’re already going to have the stage and everything in place…,’ what else could I say? So, this will be my only stadium play; but it will be two nights instead of one. And truly, Boston, I can’t wait… I can still hear the roar of our last show in my ears.”

Having played to 121,399 cheering New Englanders to close this year’s Spread The Love Tour, his 2016 shows bring the East Tennessean within one show of hitting one million fans played-to since 2005. The only country artist on Billboard’s Top 10 Touring Acts of the Last 25 Years, Chesney has built his audience through songs that capture the essence of their lives and an intense connection with the people who come out to his high-impact concerts summer after summer. Nowhere is that connection more intense than in New England.

“I can still hear those crowds,” says the songwriter/superstar The Wall Street Journal deemed “The King of the Road.” “Maybe it’s being a little too honest about how much I love the sound of all those people singing along, the way their energy hits me, but there’s nothing like it. And honestly, if we’re up there –I know that for me and everyone in my road family, it’s not going to be enough if we do just one. ”

Joining Chesney for his only stadium play of 2017 is this year’s Country Music Association Single of the Year winner Thomas Rhett, who spent six weeks at No. 1 with “Die A Happy Man,” as well as 2016 Academy of Country Music New Vocal Group Old Dominion, the perennial No Shoes Nation favorites known for their two-week chart-topper, “Break Up With Him.”

Since first playing – and selling out – Gillette Stadium in 2005, the man who just had a two-week No. 1 with “Setting the World on Fire” featuring P!NK has played 15 standing-room-only shows, including several two-night stands, on his way to selling nearly 850,000 tickets. But more than the raw numbers, Chesney has come to view the energy and passion of the fans who come to his tour’s final shows as some of the most passionate and music-driven.

“Before I was doing a lot of stadiums every year, the people not only came out to Gillette Stadium,” Chesney recalls, “but they cheered, sang and screamed their lungs out. They knew all the songs and made us feel like we were truly a part of the summer. That kind of magic stays with you. I’m really glad we’re going to be able to bring everyone together in Foxborough next summer!”

Having just released Cosmic Hallelujah, Chesney has a fistful of new songs to play from the project NPR praised for its mix of  “folk's storytelling, soul's honesty and gospel's spirit,” and Newsday deemed “country perfection.” Tickets go on sale Dec. 2 at 10 a.m. EST at www.ticketmaster.com.