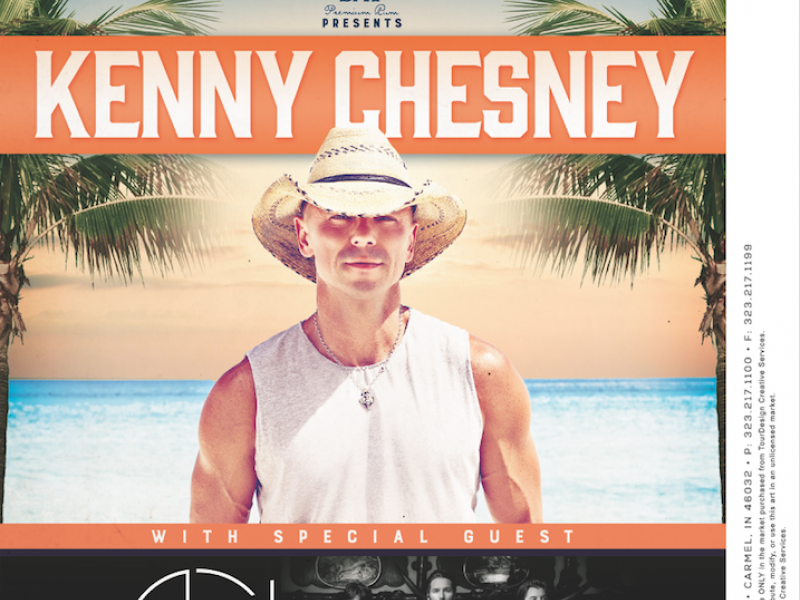 Nashville, Tenn. -- With a second Gillette Stadium show added and close to sold-out, the hunger for that live Kenny Chesney summer experience is pronounced. Though there’s a handful of festival plays on the calendar for this year, Chesney announces four more intimate shows to round out his 2017 live schedule: Tuscaloosa Amphitheater on Aug. 4 and The Wharf Amphitheatre in Orange Beach, Ala. on Aug. 5, followed by two nights at the Mohegan Sun in Uncasville, Conn. on Aug. 10 and 11. All shows this summer are presented by Blue Chair Bay Rum.

“As long as we’re rehearsing and I’ve got new music in the pipeline, I can’t imagine not playing a little bit,” says Chesney. “I know that it takes time off to create and make records… to write and find songs like ‘American Kids’ and ‘Noise,’ but that doesn’t mean I don’t miss the fans. There is nothing that feeds me more than hearing the sound of the No Shoes Nation singing these songs, seeing those faces and knowing this is gonna be one of those nights.”

Having closed 2016’s Spread the Love Tour with 121,399 cheering New Englanders at Gillette Stadium in Foxborough, Mass., along with hitting the half-million mark at MetLife Stadium in New Jersey’s Meadowlands, Chesney had one of his biggest touring years – despite playing fewer dates than he has in previous years. As he says of those shows, “I can still hear the crowds when I close my eyes at night. Just when I think it can’t get any bigger or louder, the No Shoes Nation comes at me with these songs, singing and cheering and showing me how much life we can live in three minutes.”

With “Bar at the End of the World” cresting the Top 10 in the wake of the GRAMMY-nominated two week No. 1 “Setting the World on Fire” with P!nk, Cosmic Hallelujah is continuing Chesney’s intent to sing songs that capture the lives, loves, triumphs and escapes of his fans. Raised in a small town in East Tennessee, his songs have become the soundtrack of coming of age across America. NPR praised Cosmic Hallelujah for encompassing “folk's storytelling, soul's honesty and gospel's spirit,” while Newsday deemed it “country perfection” and the Boston Globe wrote, “A country artist, he’s working a wider sonic palette, that incorporates ideas from the stadium-rockers with whom he shares dressing rooms and the rollicking Nashville bars that still loom large in country music’s imagination. Bringing the two ideas together results in the album’s best songs.”

While 2017’s shows are limited, Chesney will bring everything he’s got to these dates. For fans of the 8-time Entertainer of the Year’s high-energy concerts, Alabama and Connecticut are the places to be in August for two outdoor amphitheater and two indoor arena shows, respectively.

“We’re gonna bring a whole year’s worth of energy,” Chesney promises. “So if you’re coming, you better be ready for it, because this is our chance in 2017 to rock.”