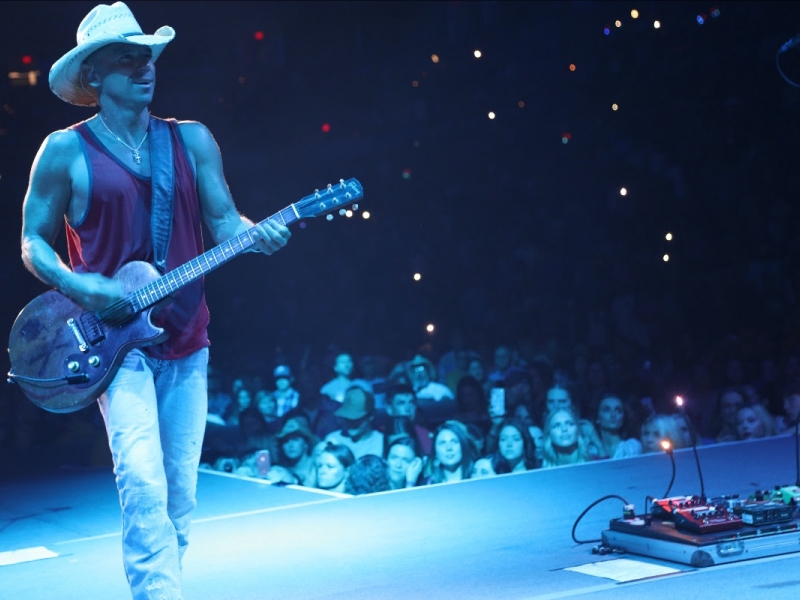 5x Platinum When The Sun Goes Down, 4x Platinum “American Kids” Are Just The Beginning of a Whole Lot of Gold, Platinum and Beyond

WASHINGTON, D.C. – When you’re as busy making the music and taking it out to No Shoes Nation as Kenny Chesney, you don’t spend much time worrying about whether you’re Gold, Platinum or even multi-Platinum. But with his wildly successful Here And Now 2022 Tour breaking multiple personal records across America’s biggest NFL stadiums and playing to 1.3 million people this summer, it’s no wonder that many of the songs that have come to watermark people’s lives have hit new thresholds in terms of RIAA certifications.

Starting with the 2004 Country Music Association Album of the Year When The Sun Goes Down being certified 5x Platinum for 5,000,000 units and “American Kids,” his multiple week No. 1, bypassing 4x Platinum, the songwriter/superstar from East Tennessee picks up 28 certifications for one of contemporary music’s most dynamic catalogues. With The Big Revival mining Platinum status, both Hemingway’s Whiskey and Just Who I Am: Poets & Pirates are now officially Double Platinum for selling over 2,000,000 copies.

“When you try to live in the music,” Chesney marvels, “you just don’t stop and count the sales figures. All of these albums were made to share with No Shoes Nation, whether it’s us up on stage, someone listening to the radio or friends hanging out listening to the records. It blows my mind a little to think that all these records are hitting these thresholds, but it also thrills me because it means the people I make this music for are still finding their lives in these songs, especially the ones that weren’t ever singles.”

The moody “El Cerrito Place” and life-affirming “Live A Little,” which are two of seven songs certified Gold, are fan favorites. Equally intriguing are first wave hits “Don’t Happen Twice” and “You Had Me From Hello” also minting Gold certification, as “You Had Me From Hello” also simultaneously earns Platinum status alongside “How Forever Feels” while “She Thinks My Tractor’s Sexy” finds Double Platinum.

With an incredibly vigorous catalogue, the four-time CMA and four-consecutive-time Academy of Country Music Entertainer of the Year has a pair of Triple Platinum certifications with his GRAMMY-nominated Grace Potter duet “You And Tequila” and the surging “Somewhere With You.” His duets with P!nk (“Setting the World On Fire”) and Uncle Kracker (the six week No. 1 “When The Sun Goes Down”) also join “There Goes My Life,” “Don’t Blink” and “Summertime” as Double Platinum certified classics.

“It’s a pretty diverse catalogue, that’s for sure,” Chesney offers, measuring the success. “But I think they all represent great songwriters at the peak of what they do. I’ve had some of the best writers in Nashville bring me their best and most interesting songs. I’ve been lucky to write some of them, too. But ultimately, we always cut what felt like it spoke to who I am and where we all were as one nation united by our love of this music.”

Rounding out the list, Chesney’s other Platinum singles are “You Save Me,” “Anything But Mine,” “All The Pretty Girls,” “Save It For A Rainy Day,” “Never Wanted Nothing More” and the Academy of Country Music Single of the Year “The Good Stuff.”

A total of 33 million singles and 10 million albums certified isn’t a bad day, especially in a year that saw the high energy musician return to the road with a vengeance.

5x Platinum
When The Sun Goes Down

3x Platinum
“You And Tequila” feat. Grace Potter
“Somewhere With You”

2x Platinum
Just Who I Am: Poets & Pirates
Hemingway’s Whiskey
“Setting the World On Fire” with P!ink
“She Thinks My Tractor’s Sexy”
“There Goes My Life”
“Don’t Blink”
“When The Sun Goes Down” with Uncle Kracker
“Summertime”