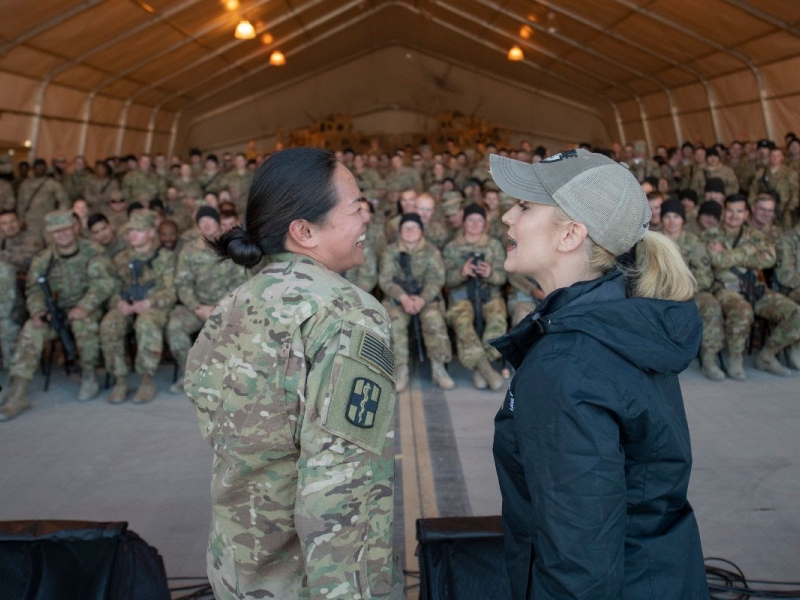 NASHVILLE, Tenn. – As an avid supporter of the U.S. Armed Forces, country singer-songwriter and actress Kellie Pickler will help lead the effort for Americans to give more than thanks to the military community as a USO Global Ambassador, in honor of the 80th anniversary of the United Service Organizations.

“I am honored to join the USO as a Global Ambassador for their 80th anniversary of supporting America’s military and especially this campaign encouraging all Americans to give more than thanks,” shares Pickler. “The USO has allowed me so many opportunities to serve those who serve us, and this is another way I can help shine a light on something that matters…supporting our servicemen, servicewomen, their families and letting them know we don’t take what they do for granted.”

Pickler, alongside USO Global Ambassador Wilmer Valderrama, will support the organization’s Give More Than Thanks initiative – a campaign encouraging all Americans to find actionable ways to express their gratitude for the service and sacrifice of our troops and their families. Throughout the year, Pickler and Valderrama will participate in events and entertainment engagements for service members, raise awareness of our military’s needs, and share ways Americans can help the USO give more than thanks.

“We are honored to have these two longtime advocates come on board as USO Global Ambassadors,” said J.D. Crouch II, USO CEO and president. “Kellie and Wilmer have seen, firsthand, the importance of the USO mission and the impact it can have when we express the nation’s gratitude to our Armed Forces. We hope their continued support will invite more Americans to join them to honor the sacrifice and service of service members and their families.”

Pickler performed on her first USO Tour in 2007 to Iraq and has since completed 12 total tours, visiting 13 international locations including Afghanistan, Germany, Iraq, Kosovo, United Kingdom, Iraq, Kuwait, Bahrain, Kyrgyzstan, Italy, Spain, Turkey, Norway; a ship at sea; and three domestic locations. Of her 12 tours, Pickler has participated in five annual USO Holiday Tours with the Chairman of the Joint Chiefs of Staff.

Additionally, Pickler has participated in a USO Military Virtual Programming (MVP) session with husband Kyle Jacobs, which was broadcast to 34 locations in the United States, Qatar, Guam and Japan, and she is a recipient of the Department of Defense Spirit of Hope Award, Operation Troop Aid Chris Kyle Patriot Award and USO of North Carolina’s Heart for the Warrior Award.

About Kellie Pickler
Country singer/songwriter and actress Kellie Pickler grew up immersed in country music in the small town of Albemarle, North Carolina with the words of Tammy Wynette, Patsy Cline, Loretta Lynn and Dolly Parton shaping her musical footing. At the age of 19, she gained fame as a contestant on the fifth season of “American Idol.” In 2006, she signed with 19 Recordings/BNA Records and released her debut album, Small Town Girl, which has gone on to sell more than 900,000 copies worldwide and produce three hit singles: “Red High Heels,” “I Wonder” and “Things That Never Cross a Man’s Mind.” She followed that in 2008 with her self-titled sophomore record, featuring country radio hits “Don’t You Know You’re Beautiful,” “Best Days of Your Life” (co-written with Taylor Swift and her first Top 10) and “Didn’t You Know How Much I Loved You.” Having established herself as not only a powerful vocalist but also a songwriter, Pickler released her third studio album, 100 Proof, in 2011 to huge critical acclaim. The album was named the No. 1 Country Album of The Year by Rolling Stone and listed on the “Best of 2012” by The Washington Post.

In 2018, Kellie made her Hallmark Channel debut with “Christmas at Graceland,” their highest-rated movie in history and most-watched movie of the year, playing the film’s lead, Laurel: a finance executive who rediscovers her passion for singing; a role she reprised in the June 2019 sequel “Wedding at Graceland.” For the films, Kellie recorded and performed beloved Christmas songs including: “Silent Night,” “I’ll Be Home For Christmas,” “Joy To The World,” and Elvis Presley hits “Can’t Help Falling in Love” and “Hound Dog.”  In-between touring, Kellie filmed her third Hallmark Channel movie “The Mistletoe Secret,” which premiered in November 2019.

Pickler is an avid supporter of the U.S. military, having completed twelve USO Tours. She has been honored with the Department of Defense Spirit of Hope Award, the USO Heart for the Warrior Award and the Chris Kyle Patriot Award.
About the USOThe USO strengthens America's military service members by keeping them connected to family, home and country, throughout their service to the nation. At hundreds of locations worldwide, we are united in our commitment to connect our service members and their families through countless acts of caring, comfort and support. The USO is a private nonprofit organization, not a government agency. Our programs, services and entertainment tours are made possible by the American people, support of our corporate partners and the dedication of our volunteers and staff. To join us in this important mission and learn more about the USO, please visit USO.org and  follow us on Facebook, Twitter and Instagram.