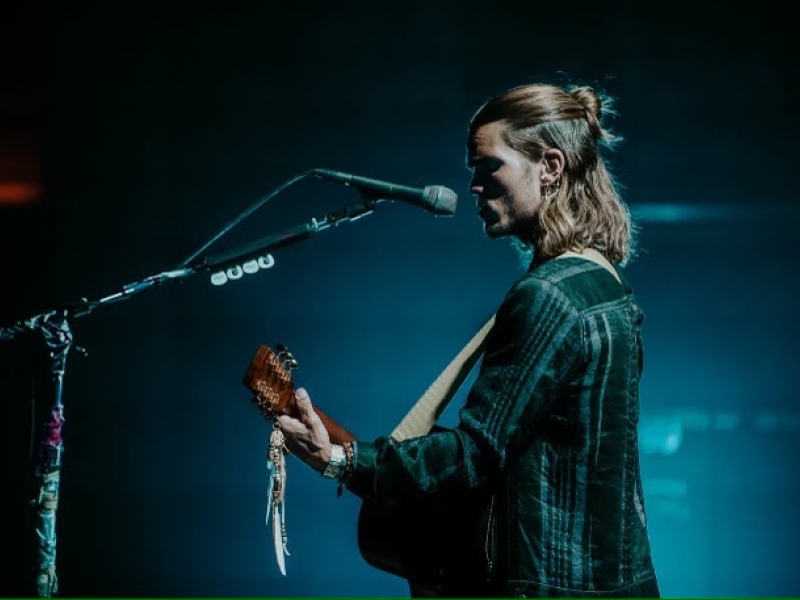 Fight Or Flight Tour Continues Tonight in St. Louis, Mo. at The Pageant; Tickets for All Dates Available at OfficialKALEO.com

NASHVILLE, Tenn. – Following a series of sold-out shows on the North American leg of their Fight Or Flight Tour, GRAMMY-nominated Elektra/Atlantic band KALEO make their triumphant return to Nashville – where much of their 2021 sophomore release Surface Sounds was recorded – with back-to-back performances at two of Music City’s staples: Ryman Auditorium and The Grand Ole Opry.

With vast influences including rock, blues and folk at the core, KALEO stepped into the circle at the Opry, already creating history by being the first Icelandic artists to take the stage, while making their Opry debut with a stripped-back, slowed-tempo version of their GRAMMY-nominated song “No Good,” featuring Þorleifur Gaukur Davíðsson (Thor) with a spell-binding harmonica solo.

Taking a moment to step back and look out from the stage, front man JJ Julius Son addressed the crowd, sharing “It’s an honor to be here, thank you for having us.

“Actually, yesterday, a little boy came up to me and asked if I was a real cowboy. And I said, ‘No, I’m from Iceland,’” Julius Son said with a smile, drawing a laugh from the audience. “Being the first Icelandic cowboys here is an honor. And I felt it was fitting to premiere this song.”

Julius Son then played the opening chords to “Lonely Cowboy,” marking the track’s world premiere before ending their set with the two-time RIAA-Platinum certified “Way Down We Go.”

Known for their electrifying live performances, KALEO took the stage at Ryman Auditorium Monday night, performing to a sold-out crowd where even industry insiders could not purchase a ticket day-of-show.

KALEO opened their set with “Break My Baby,” one of two lead singles from Surface Sounds, which made an immediate impact at Triple A radio as the No. 1 most-added song after its first week, later climbing to the Top 6.

The band immediately followed with “Alter Ego,” the perfect song to showcase Julius Son’s raspy vocal turned falsetto, effectively gearing up the crowd for the kind of showmanship and musical prowess the band would continue to reveal throughout the night.

Preferring to let the music do the talking, Julius Son addressed the crowd after the third song: “This is the best place for a musician to be. Thank you so much for having us,” before sliding into the balladry of the only song they perform in their native tongue: “Vor í Vaglaskógi” from RIAA Gold-certified major label debut A/B.

Backlit with a golden luminescence, the crowd flew into cheers as Julius Son began whistling the tune to “Automobile” before he began strumming the acoustic intro followed by “Backbone,” with atmospheric background vocals provided by Jessica Jolia and April Rucker on full display before building into its pleading chorus, “Where’s your backbone, brother?”

Turning things back up to 10, the room erupted with “Hey Gringo,” (easily one of the grooviest songs of the night, mixing soul, blues and even a hint of disco in their live arrangement, bringing fans to their feet to dance along in the pews) followed by “Broken Bones,” with pared-back percussion featuring only kickdrum and tambourine before Thor stepped to the front of the stage to deliver a powerhouse harmonica solo.

Following A/B’s rocking “Hot Blood,” drummer David Antonsson plowed through an extensive drum solo, before Julius Son reappeared behind a piano to perform Surface Sounds opener “Brother Run Fast,” a satisfying ballad with a building sense of urgency and immediately launching into “I Walk on Water,” praised earlier this tour by The Spokesman-Review that it “brings to mind the blue-eyed soul of Michael McDonald of the Doobie Brothers, but offers listeners a triumphant, uplifting conclusion.”

Speaking with contempt to the societal and cultural issues and expectations surrounding women in the public eye, KALEO gave a cathartic performance of “Skinny,” a dynamic and emphatic outcry, with Julius Son underlining the lyrics of the chorus:

Nearing the end of their set, the crowd roared and climbed to their feet as they heard the opening lines to No. 1 hit “Way Down We Go,” which was used in over two dozen television shows from “Grey’s Anatomy” to “Riverdale,” and landing at the top of The Hollywood Reporter’s TV Songs chart.

The sold-out crowd continued their applause, encouraging KALEO to return for one final song, the GRAMMY-nominated “No Good,” its opening riff flooding the Ryman with their signature fast-paced blues-rock that’s gained the Icelandic band notoriety across the globe, proving them to be a worldwide phenomenon.

KALEO’s Fight Or Flight Tour continues tonight, April 6 at The Pageant in St. Louis, with nearly 30 more stops across North America, including a sold-out return to iconic Red Rocks, before embarking on the European leg this summer. Tickets are available for all dates at OfficialKALEO.com.

About KALEO
Since the release of their Gold-certified breakthrough album, 2016’s A/B, Icelandic rock band KALEO—led by frontman/songwriter JJ Julius Son—has taken their music around the world. The album spawned three hit singles – the GRAMMY-nominated “No Good,” the Gold-selling “All The Pretty Girls” and the chart-topping, 2x Platinum-certified “Way Down We Go” which was used in over two dozen television shows from “Grey’s Anatomy” to “Riverdale,” leading the No. 1 single to top The Hollywood Reporter’s Top TV Songs chart. After amassing over 1 Billion global streams, 39 international certifications, and countless sold-out headline shows spanning from London to Moscow, KALEO has proven to be a worldwide phenomenon. Known for their electrifying live performances, KALEO completely sold out their first U.S. headline tour and was a standout at Coachella, Lollapalooza and Bonnaroo and were hand-picked to open stadium dates for the Rolling Stones. Since KALEO wrapped a nearly non-stop 3-year touring schedule in support of A/B in October 2018, Julius Son went into the studio to work on the highly anticipated follow-up, Surface Sounds on Elektra/Atlantic, available everywhere now. KALEO’s Fight or Flight Tour 2022 launches Feb. 22 in Seattle, Wash., featuring 50+ dates across North America, including a stop at the iconic Red Rocks Amphitheatre in Morrison, Colo. on May 16. For more information, visit OfficialKALEO.com or follow on Instagram and Twitter @OfficialKALEO and Facebook.com/OfficialKALEO.