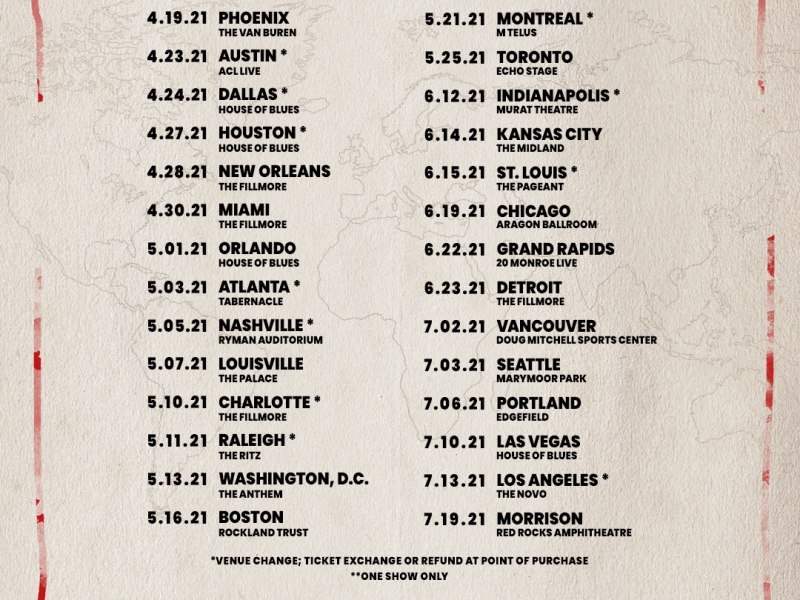 30 City Tour Kicks Off in San Francisco on April 15

“The health of our fans, our crew and communities around the world remains our number one priority,” shares KALEO. “We have made the decision to move our Fight or Flight Tour to 2021 with all of that in mind. We are excited to celebrate the power of live music together again when the time is right.”

Launching in San Francisco on April 15, 2021, KALEO is set to perform at venues across North America including The Novo in Los Angeles, Terminal 5 in New York, The Anthem in Washington, D.C., Ryman Auditorium in Nashville and many more through July 19. Tickets are available for purchase HERE.

Last month, KALEO announced their upcoming album Surface Sounds, initially scheduled for June 5, 2020, will be released at a later date.

“Due to the global impact of COVID-19 travel bans and mandates, we are unable to complete our original plan to release Surface Sounds on June 5,” shares KALEO songwriter and frontman JJ Julius Son.

“We know you have waited a long time for new KALEO music and want to thank you for your continued support and patience,” continues Julius Son. “We are still so excited to share this album with you when it is ready.”

Since wrapping a nearly non-stop touring schedule supporting their major label debut A/B in 2018, Julius Son has been in the studio off-and-on for two years, allowing for a combination of globe-trotting and meticulous tinkering, resulting in a spectrum of sounds recorded around the world – in North America, South America and across Europe. The final product is refreshingly free of calculation, with Julius Son allowing each tune to dictate its path while simultaneously leaning-in to his blues, folk and rock inclinations.

KALEO has released four tracks from Surface Sounds, including lead singles “I Want More,” praised by Texas Monthly as a “tender-yet-tough anthem,” and currently Top 10 and climbing the Triple A chart, and “Break My Baby,” described by Loudwire as “hooky and groovy, showcasing the range of [Julius Son’s] vocal and a gritty, bluesy approach.” KALEO followed the singles with “Alter Ego,” and most recently, “Backbone.”

About KALEO
Since the release of their gold-certified breakthrough album, 2016’s A/B, Icelandic rock band KALEO—led by frontman/songwriter JJ Julius Son—has taken their music around the world. The album spawned three hit singles – the GRAMMY-nominated “No Good,” the gold-selling “All The Pretty Girls” and the chart-topping, 2x Platinum-certified “Way Down We Go” which was used in over two dozen television shows from Grey’s Anatomy to Riverdale, leading the No. 1 single to top The Hollywood Reporter’s Top TV Songs chart. After amassing over 1 Billion global streams, 39 international certifications, and countless sold-out headline shows spanning from London to Moscow, KALEO has proven to be a worldwide phenomenon. Known for their electrifying live performances, KALEO completely sold out their first U.S. headline tour and was a standout at Coachella, Lollapalooza and Bonnaroo and recently were hand-picked to open stadium dates for the Rolling Stones. Since KALEO wrapped a nearly non-stop 3-year touring schedule in support of A/B in October 2018, Julius Son has been in the studio working on the highly anticipated follow-up, Surface Sounds on Elektra/Atlantic. Lead singles “I Want More,” and “Break My Baby” are out now, as well as “Alter Ego” and “Backbone.”