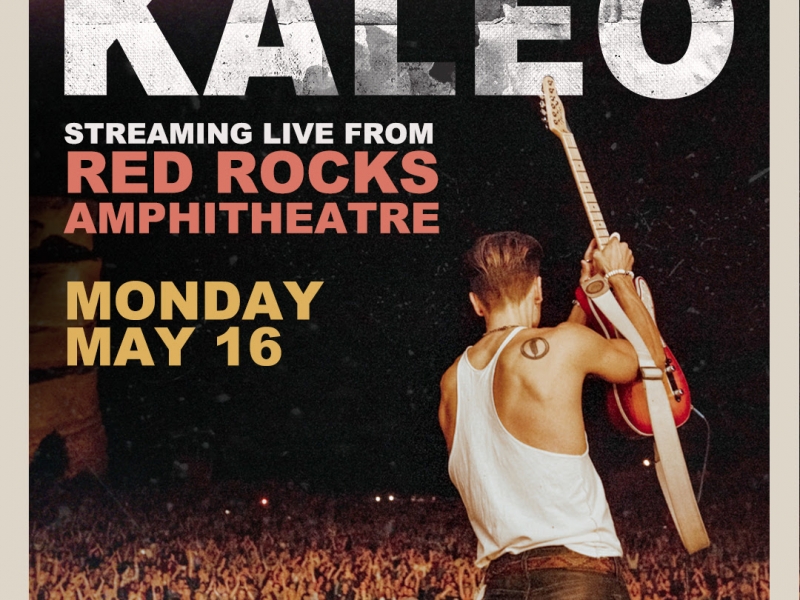 GRAMMY-Nominated Rock Band Set to Perform at Red Rocks on May 16 with an
Exclusive Livestream; Tickets On Sale Now via Veeps

Fight Or Flight Tour Continues Tonight in Cleveland, Ohio at House of Blues;
Tickets for All Dates Available at OfficialKALEO.com

MORRISON, Colo. – On the heels of their debut at The Grand Ole Opry and a sold-out show at Ryman Auditorium in Nashville, Tenn., Elektra/Atlantic recording artists KALEO announce an exclusive livestream from their sold-out show at Red Rocks Amphitheatre in Morrison, Colo. on May 16, via Veeps. Tickets for the Fight Or Flight Spring Tour – Live from Red Rocks livestream are $17.99 and on sale now.

The livestream also will feature supporting acts The Glorious Sons and Bones Owen, with video-on-demand streaming available for KALEO’s set for 72 hours after the live broadcast.

Earlier this week, the Icelandic-natives made their Grand Ole Opry debut, delivering the world premiere of “Lonely Cowboy” from the historic circle, after a sold-out show at the highly revered Ryman Auditorium, performing tracks from their latest release Surface Sounds, including Triple A Top 6 hit “Break My Baby,” the atmospheric “Backbone,” and the groovy “Hey Gringo,” as well as hits from 2016’s breakthrough major label debut A/B: the two-time RIAA Platinum-certified chart-topper “Way Down We Go,” fan-favorites “Automobile” and “Hot Blood,” before closing out their set with the GRAMMY-nominated rocker “No Good.”

Last month, KALEO debuted a live performance video of “Backbone” from an ice cave located on Breiðarmerkurjökull, part of the larger glacier Vatnajökull. Watch the video HERE and listen to the live recording HERE.

Filmed in January 2021, the performance video opens with a stirring view of the Vatnajökull ice cap juxtaposed with some of Iceland’s native wildlife running across the plateau. The viewer follows KALEO as they trudge over long stretches of desolate, mesmerizing glacier. The instrumental builds as the band arrives at the Breiðarmerkurjökull ice cave before front man and songwriter JJ Julius Son plays the opening chords.

Drenched in pedal steel, the stripped-down version of “Backbone” showcases the brooding balladry of the song and Julius Son’s knack for storytelling allusions. As the camera pans out and the scene fades away, a message appears:

“The ice cave where this live performance was filmed has melted and disappeared. By the year 2100, the entire glacier will be gone.”

“Backbone (Live at Breiðarmerkurjökull)” follows “Skinny (Live from Fagradalsfjall Volcanic Eruption),” another in a series of live performances from some of Iceland’s spectacular landscapes, including “Break My Baby (Live from ÞRÍDRANGAR),” recorded and filmed at the iconic ÞRÍDRANGAR lighthouse, located atop a remote rock formation in the North Atlantic Ocean.

KALEO kicked off their Fight Or Flight Tour earlier this year, with the North American leg boasting 50+ dates, selling out a series of venues across the U.S. before heading to Europe this summer.

Watch a tour recap of their shows in Texas HERE and the Pacific Northwest HERE, where The Spokesman-Review praised of their Spokane date at The Knitting Factory, “Built largely around the musical prowess of powerhouse vocalist JJ Julius Son, the indie rock outfit displayed an impressive array of influence and emotional awareness, with tracks ranging from Hozier-esque ballads to soulful psychedelic explosions reminiscent of Pink Floyd.”

The Fight Or Flight Tour continues tonight in Cleveland, Ohio at The House of Blues. Tickets are available for the full tour at OfficialKALEO.com (full itinerary below).

About KALEO
Since the release of their Gold-certified breakthrough album, 2016’s A/B, Icelandic rock band KALEO—led by frontman/songwriter JJ Julius Son—has taken their music around the world. The album spawned three hit singles – the GRAMMY-nominated “No Good,” the Gold-selling “All The Pretty Girls” and the chart-topping, 2x Platinum-certified “Way Down We Go” which was used in over two dozen television shows from “Grey’s Anatomy” to “Riverdale,” leading the No. 1 single to top The Hollywood Reporter’s Top TV Songs chart. After amassing over 1 Billion global streams, 39 international certifications, and countless sold-out headline shows spanning from London to Moscow, KALEO has proven to be a worldwide phenomenon. Known for their electrifying live performances, KALEO completely sold out their first U.S. headline tour and was a standout at Coachella, Lollapalooza and Bonnaroo and were hand-picked to open stadium dates for the Rolling Stones. Since KALEO wrapped a nearly non-stop 3-year touring schedule in support of A/B in October 2018, Julius Son went into the studio to work on the highly anticipated follow-up, Surface Sounds on Elektra/Atlantic, available everywhere now. KALEO’s Fight or Flight Tour 2022 launches Feb. 22 in Seattle, Wash., featuring 50+ dates across North America, including a stop at the iconic Red Rocks Amphitheatre in Morrison, Colo. on May 16. For more information, visit OfficialKALEO.com or follow on Instagram and Twitter @OfficialKALEO and Facebook.com/OfficialKALEO.