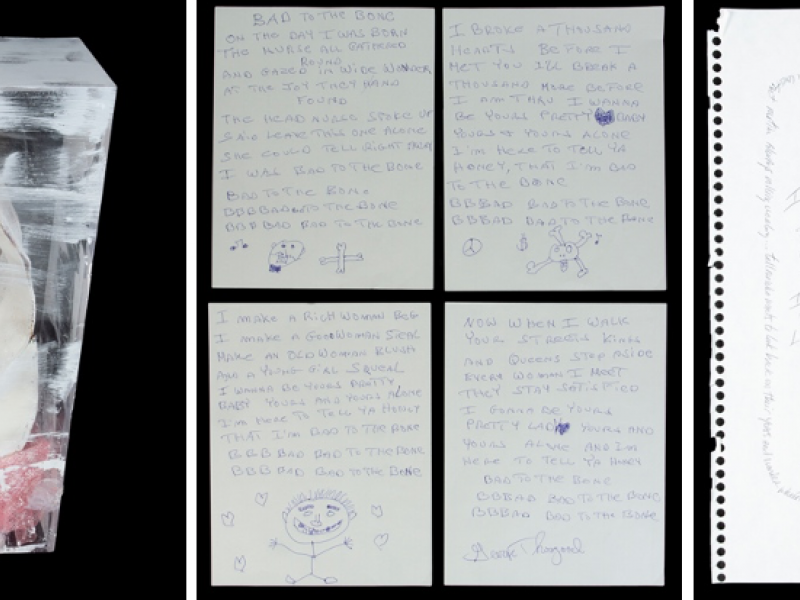 Los Angeles, California /Nashville, Tennessee – Julien’s Auctions announced the launch of the exclusive, online charity auction MUSIC HEALTH ALLIANCE SECOND ANNUAL HANDWRITTEN LYRICS AUCTION at juliensauctions.com for advance bidding beginning TODAY, October 15, 2021 to coincide with Heal The Music Day. The auction will start closing in real time and in lot order for live bidding at 11:00 a.m. Pacific Time on Monday, November 1, 2021.  Proceeds will benefit Music Health Alliance whose mission is to Heal the Music by providing access to healthcare through services that protect, direct and connect music professionals with medical and financial situations.

For the second consecutive year, the world-record breaking auction house to the stars partnered with a marquee list of the most decorated and influential singers and songwriters of all time, across the genres of pop, rock, country, folk, americana, and gospel music, who personally donated handwritten lyrics of some of their most classic and ground-breaking hits to this urgent initiative to aid the devastated music community during the ongoing pandemic.
Highlighted handwritten song lyrics signed by the songwriter and/or recording artist include (each estimate range: $600-$2,000):

Since 2013, Music Health Alliance has been providing free healthcare advocacy and resources to more than 15,000 members of the nationwide music community. The work of MHA’s 10 in-house advocates has saved more than $70,000,000 in healthcare costs and provided lifesaving access to medical procedures, mental health resources, diagnostic tests, prescriptions and more, and helped countless families avoid bankruptcy due to mounting medical debt. MHA fights so those in our industry never have to feel alone in a health crisis and removes obstacles so patients can receive lifesaving care. Its services are free to any person who has worked in the music industry for three or more years or who has credited contributions to 4 commercially released recordings or videos. Spouses, partners, and children of qualifying individuals may also receive access to the non-profit’s services from birth to end of life. More info at www.musichealthalliance.com.

ONLINE AUCTION
Music Health Alliance Second Annual Handwritten Lyrics Auction
Monday, November 1, 2021
Session I: 11:00 a.m. Pacific Time
REGISTERING TO BID
Registration is required to bid in this online auction and can be done online before the sale at the JuliensLive.com to bid live online. For inquiries, please email info@juliensauctions.com or call 310-836-1818.
PLACING BIDS
Bid through Julien's Auctions online live in advance and in real time during the closing of the auction starting at 11:00 am Pacific Time in lot order at JuliensLive.com.

ABOUT JULIEN’S AUCTIONS
Julien’s Auctions is the world record-breaking auction house to the stars. Collaborating with the famous and the exclusive, Julien’s Auctions produces high profile auctions in the film, music, sports and art markets. Julien’s Auctions has received international recognition for its unique and innovative auction events, which attract thousands of collectors, investors, fans and enthusiasts from around the world. Julien’s Auctions specializes in sales of iconic artifacts and notable collections including Marilyn Monroe, John Lennon, Ringo Starr, Lady Gaga, Banksy, Cher, Michael Jackson, U2, Barbra Streisand, Les Paul, Neil Young, Elvis Presley, Frank Sinatra, Jimi Hendrix and many more. In 2016, Julien’s Auctions received its second placement in the Guinness Book of World Records for the sale of the world’s most expensive dress ever sold at auction, The Marilyn Monroe “Happy Birthday Mr. President” dress which sold for $4.8 million. Julien’s Auctions achieved placement in the Guinness Book of World Records in 2009 for the sale of Michael Jackson’s white glove, which sold for $480,000 making it the most expensive glove ever sold at auction. In 2020, Julien’s Auctions received its third Guinness Book of World Record placement for the sale of Kurt Cobain’s “MTV Unplugged” 1959 Martin D-18E acoustic-electric guitar, which sold for $6 million making it the world’s most expensive guitar ever sold at auction. Based in Beverly Hills, Julien’s Auctions has a global presence bringing their auctions and exhibitions to targeted destinations worldwide including London, New York, Las Vegas, Japan and China. Live auctions are presented for bidders on-site and online via live streaming video and mobile technology. For more information on Julien’s Auctions, go to www.juliensauctions.com. Connect with Julien’s Auctions at www.facebook.com/JuliensAuctions or www.twitter.com/JuliensAuctions or www.instagram.com/juliens_auctions