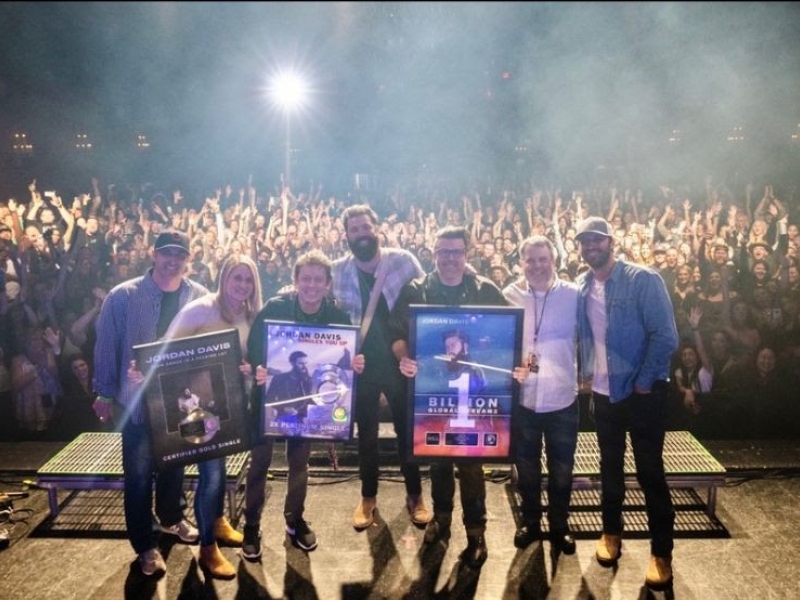 Country hitmaker Jordan Davis continued a run of sold-out shows on his headlining Trouble Town Tour over the weekend with sell-outs at Ace of Spades in Sacramento, El Rey Theatre in Los Angeles and the House of Blues in San Diego. His recent collaboration with pop star Julia Michaels, “Cool Anymore,” as well as other new releases such as tour-titled “Trouble Town” and his take on Jo De Messina’s 1996 “Heads Carolina, Tails California” have shone brightly with fans on the road.

While performing at LA’s El Rey Theatre, Davis was surprised with three plaques, one for his current Top 10 single “Slow Dance In A Parking Lot” being Certified Gold by the RIAA, another in recognition for his No. 1 hit song “Singles You Up” being Certified Double Platinum by the RIAA and the third for his debut album Home State reaching 1 billion global streams.

In addition to the sold-out crowds over the weekend, Davis kicked off last week’s West Coast run with an an intimate seven-song set and interview at the GRAMMY Museum on Monday, March 2 in Los Angeles. The set teased new songs on the horizon such as “Detours” and “Need To Not,” as well as Home State standouts “Tough To Tie Down,” “Leaving New Orleans” and the Platinum-Certified No. 1 hit “Take it From Me.”

Davis’s successful Trouble Town Tour, with support from Kassi Ashton and Hailey Whitters on select dates, opened with a sold-out show in Rosemont, IL and has seen at capacity crowds across the country including shows in Atlanta, Denver, Los Angeles and more. All remaining dates are sold out. The tour continues in New York City at Webster Hall on March 19 after his C2C performances and concludes in Baltimore, MD at Rams Head Live on March 21.

About Jordan Davis:
MCA Nashville’s Jordan Davis has been named an Artist to Watch by Billboard, Rolling Stone, CMT, Pandora, Shazam, Amazon Music, Sounds Like Nashville, The Tennessean, SiriusXM, Whiskey Riff and more. A Native of Shreveport, Louisiana, Jordan graduated from LSU and briefly pursued the path of his degree working as an environmental consultant; however, his passion for music and songwriting eventually compelled him to move to Nashville in the summer of 2012. Jordan’s debut album Home State has accumulated 1 billion streams worldwide and features his current Top 10 single “Slow Dance In A Parking Lot” as well as two recent back-to-back No.1 Platinum-Certified hits “Singles You Up” and “Take It From Me.” In 2019 Jordan won Best New Country Artist at the iHeart Radio Music Awards and was a nominee for ACM New Male Artist of the Year. He was also named Billboard’s Top New Country Artist of 2018 as well as Country Aircheck/Mediabase’s Most Heard New Artist of 2018. The hitmaker just released a new collaboration with GRAMMY-nominated artist Julia Michaels titled “Cool Anymore.” The track was written by Jordan and Julia along with Nicolle Galyon, Ross Copperman and Emily Weisband. The singer/songwriter has previously toured with the likes of Rascal Flatts, Jake Owen, Kip Moore, Brett Young and Old Dominion. On Jan. 10, 2020, Davis kicked off his headlining Trouble Town Tour in Milwaukee, Wisc. hitting over 20 cities including New York, Los Angeles, Atlanta and Denver with up-and-comers Kassi Ashton and Hailey Whitters on select dates. For additional information, visit www.jordandavisofficial.com