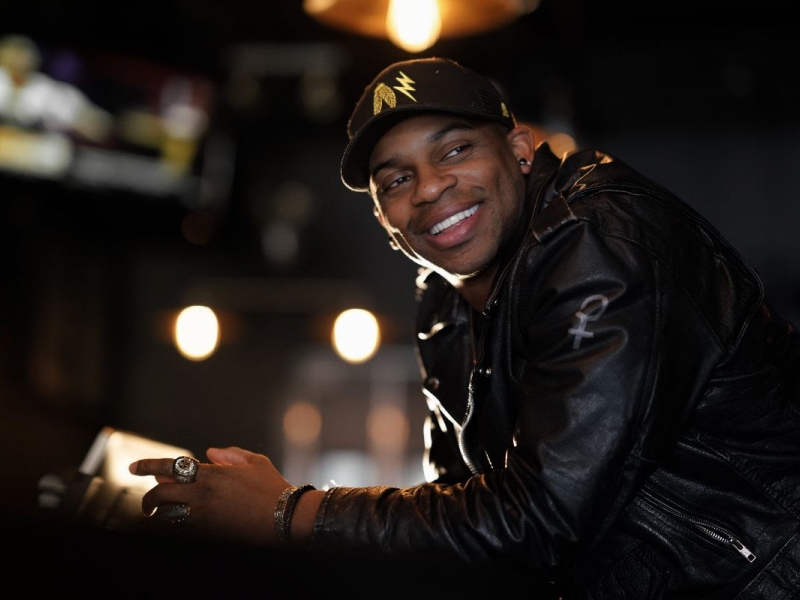 On the heels of his historic No. 1 debut single “Best Shot,” country breakout star Jimmie Allen is back with a song he wrote with Paul Sikes and Jennifer Denmark, “Make Me Want To.” It’s the second single off his Stoney Creek Records / BBR Music Group debut album Mercury Lane, an album The New York Timesdubbed one of 2018’s strongest, calling it “a conventional country album, filled with songs about the small details.”

“I’m a sensitive guy,” Allen shares. “I’m usually the one to catch feelings for a girl first. So while on the surface this song may seem like it’s the typical ‘boy meets girl at a bar’ type of story, it’s really about a guy who falls head over heels for this girl, just like that. The lyrics say it best: ‘Yeah it might be too soon to say I love you, But you’re gonna make me want to.’”

“Make Me Want To” is the follow up to Allen’s debut No. 1 “Best Shot,” which made history after spending two consecutive weeks on top of the Country radio charts and returning to No. 1 again for a third week after falling one spot, marking the first time a Country Airplay debut has hit No. 1 for three weeks since Florida Georgia Line's "Cruise" in 2012 and the first for a solo male artist since Blake Shelton's "Austin” in 2001. "Best Shot" is also the first song by any artist to return to No. 1 on Country Airplay after descending in over a decade.

The Delaware native wrapped his run on Scotty McCreery’s Seasons Change Tour this weekend with a sold-out show in Boston and will hit the road next month with Kane Brown on his Live Forever Tour. The Live Forever Tourwill break new ground for African-American country artists. Reported by People.com from Allen’s recent No. 1 party, he recalls texting Brown and reminding him their first show together is history, “because someone said there’s never been two black country artists that have ever toured together.”

About Jimmie Allen:
The epitome of the phrase “persistence pays off,” Jimmie Allen laid it all on the line to make his dreams a reality. Now signed to BBR Music Group’s Stoney Creek Records, Allen’s debut single “Best Shot” is a certified hit, claiming the spot as the No. 1 Most Shazamed song in the format for eight consecutive weeks, and claiming the No. 1 spot on Country radio for three weeks, marking the first time a black artist has launched a career with a No. 1 hit with their debut single on Country radio.

On October 12, 2018, Allen released his hotly-anticipated debut album, Mercury Lane, named in tribute to the street he grew up on and the origin of his incredible journey. Featuring a cutting-edge mix of country, rock, R&B and pop, Mercury Lane draws upon the influence of his family and small-town upbringing of the critically-acclaimed rising star. Rolling Stone raved Allen’s debut “challenges the narrowly defined model of what constitutes a next big thing in country music in 2018.”

The Southern Delaware native’s talent for songwriting is undeniable, having written a song that was featured in a Super Bowl commercial and appearing in a Diet Coke ad with megastar Taylor Swift. “Blue Jean Baby,” off his debut self-titled EP, immediately caught the attention of country music fans and critics alike with its soulful groove— rocketing it to the top of digital playlists, across all genres. After introducing his music at festivals across the country last summer, this winter Allen will hit the road once again to share the stage with Kane Brown and Scotty McCreery. The hot newcomer has already been heralded as one of the top “artists to watch in 2018” by Rolling Stone, Billboard, Pandora, Sounds Like Nashville, NY Country Swag, Country Music Rocks and New England Country Music and has earned spots in CMT’s “18 for 2018” Listen Up program and Bobby Bones’ Class of 2018.