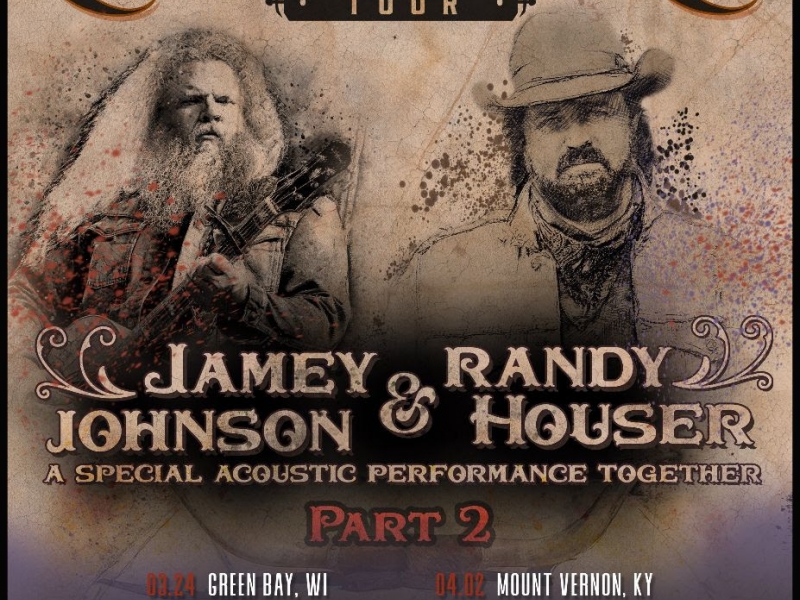 NASHVILLE, Tenn. – Due to overwhelming demand, country singer/songwriters Jamey Johnson and Randy Houser will reboot their highly successful 2021 tour to share the stage once again on the co-headlining Country Cadillac Tour Part 2. It begins on March 24 at Epic Event Center  in Ashwaubenon, WI. (See more tour dates below.) Additional dates are being added as requests continue to roll in. The presale begins on Wednesday, Jan. 19 at noon CT and public on sale will begin on Friday, Jan. 21 at 10 a.m. CT.The two longtime friends are taking a break from their critically lauded solo tours to once again share the stage while performing acoustically and swapping stories, jokes and songs. The audience never knows what to expect because no two shows are alike.

The music of Johnson and Houser has truly resonated with music lovers during the pandemic, as evidenced by ticket sales and streaming numbers. They were among the first to find a safe way to bring live music to fans during the pandemic by incorporating strict protocols that proved effective.

Indeed, Johnson’s tour was ranked in the Top 10 of all music tours in the third quarter of 2021 and was also the topped rank music tour worldwide during July 2021. At year’s end, he came in at No. 80 on Pollstar’s Top 100 2021 Tours in Worldwide Ticket Sales.

Meanwhile, Houser hunkered down in the studio during the second half of 2021 to complete a soon-to-be released album while acting in two feature films.

The Country Cadillac Tour is something that the two men had talked about doing for years, but they weren’t able to coordinate their busy schedules until recently.

In their early days in Nashville, Johnson and Houser were part of a close-knit group that also included Lee Brice, Jerrod Niemann, Dallas Davison and Rob Hatch that supported each other personally and professionally as they wrote songs, signed record deals and garnered radio hits and industry awards. For instance, Johnson, Houser and Davidson wrote “Honky Tonk Badonkadonk,” which was a hit for Trace Adkins. Between the two of them, they have racked up numerous GRAMMY, CMA and ACM nominations and wins.

The two have performed onstage together throughout the years, most recently singing “Lead Me Home” and “Evangeline” at Farm Aid.  Last year, they duo took the Country Cadillac Tour global with their “Live from Graceland” livestream from the home of Elvis Presley.

ABOUT JAMEY JOHNSON
Jamey Johnson is an 11-time Grammy-nominated singer-songwriter who is “one of the greatest country singers of our time,” according to The Washington Post.

The honesty of his timeless voice and soul-baring songs--from “In Color” and “High Cost of Living” to “That’s Why I Write Songs,” “Poor Man Blues” and “Can’t Cash My Checks”--serve as a beacon for what matters most in music and in life. Indeed, the Alabama native has been acknowledged by many as country music’s north star, guiding us down a path of confession and conflict to a place of reflection and redemption.

He has received tremendous praise from The New York Times, Rolling Stone, The Wall Street Journal and other publications, many of which have hailed his albums as masterpieces.

His influential 2008 album, That Lonesome Song, was certified platinum for 1 million in sales, and his innovative 2010 double album, The Guitar Song, which debuted at No. 1 on the country album charts, received a gold certification. In 2012, he released a Grammy-nominated project honoring one of his heroes, Living for a Song: A Tribute to Hank Cochran, that paired him with Willie Nelson, Alison Krauss, Emmylou Harris, Ray Price, Elvis Costello, George Strait, Vince Gill and Merle Haggard.

Like many of his idols, Johnson is also recognized as one of the most powerful and prolific songwriters of his generation. He is one of only a few people in the history of country music to win two Song of the Year Awards–for “Give It Away” and “In Color”--from the Academy of Country Music and the Country Music Association.  His songs have been recorded by George Strait, Chris Stapleton, Willie Nelson, Trace Adkins, James Otto, Joe Nichols and others.

In 2014, he took a significant step in independence and creative freedom by launching his own label, Big Gassed Records, which allows him to release music in any format and timeframe that suits him.

ABOUT RANDY HOUSER
With an inimitable voice the New York Times describes as “wholly different, thicker and more throbbing, a caldron bubbling over,” Randy Houser racked up three consecutive No. 1 hits and more than four million in singles sales to date with his Stoney Creek Records album, How Country Feels.

He topped the charts with the title track, “Runnin’ Outta Moonlight” and “Goodnight Kiss” (also his first No. 1 as a songwriter) and earned critical acclaim for his powerful delivery of the Top 5 smash and CMA Song of the Year-nominated “Like A Cowboy.” Houser added a fourth No. 1 to his catalogue with “We Went” from his 2016 album, Fired Up.

Randy Houser’s fifth studio album, Magnolia (available now), is his third album with current label home, Stoney Creek Records and marks a new era for the singer/songwriter which many have called “Houser at his best.” Listeners got their first taste of Houser’s critically acclaimed rootsy project with the Top 30 hit “What Whiskey Does,” which debuted at Country radio as No. 1 Most Added and Rolling Stone immediately dubbed “a classic tears-and-twang drinking song.” The album which NPR claims is home to “some of the most expressive performances of his career,” also includes his  single, “No Stone Unturned,” a gypsy-hearted traveling song that Whiskey Riff calls “the best song, from the best album of 2019.”