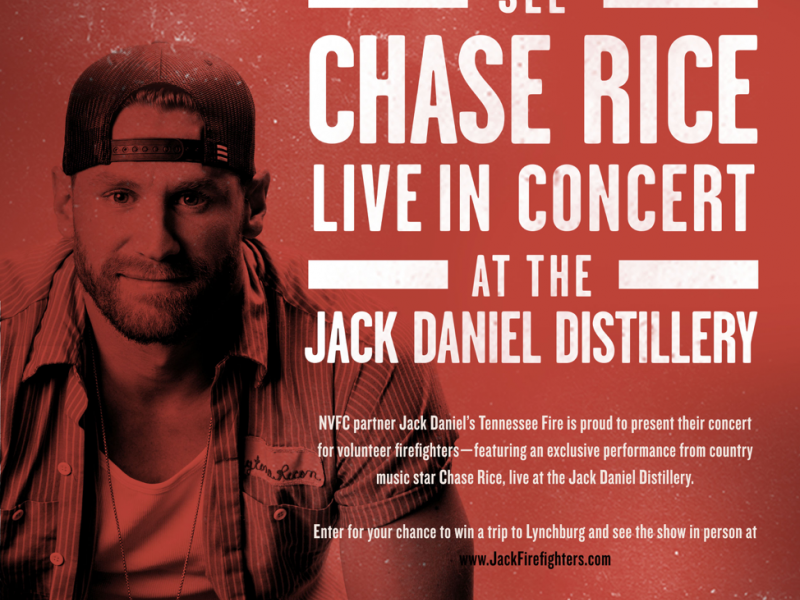 The NVFC is a nonprofit membership association representing the interests of volunteer fire, EMS and rescue services. The organization serves as an advocate for the volunteer on the national level and provides needed programs and resources to first responders addressing critical needs such as safety, health, recruitment, retention, training, funding and more.

“There are over 800,000 firefighters across the country who volunteer to serve and protect their communities, and we work to make sure these heroes have the tools and resources they need to thrive,” said NVFC Chair Kevin D. Quinn. “Jack Daniel’s Tennessee Fire shares our passion for and dedication to the fire service, and we are excited to partner with them to give back to our boots-on-the ground.”

The Jack Daniel Distillery is one of the only distilleries which has its own fire brigade, staffed by 34 distillery workers who volunteer their time to protect the distillery and the Tennessee Whiskey they work so hard to create.

“I know first-hand the amount of courage and skill required to serve as a firefighter. I also know that those who volunteer to protect their communities need a great deal of support to do so safely and effectively,” said Fred Elliott, Fire and Security Specialist at the Jack Daniel Distillery. “As a member of the Jack Daniel’s Fire Brigade for more than 14 years, I’m proud to be a part of this important community while also working for a company that champions it. Firefighters are an integral part of the Jack Daniel’s story, from those who help us make our whiskey to those who work to protect it, and we are honored to be able to give back through this partnership with the NVFC.”

In addition to the fundraising efforts, Jack Daniel’s Tennessee Fire will also launch a contest for 50 firefighters to win a trip to the Jack Daniel Distillery to attend a concert featuring country artist Chase Rice. The intimate weekend will include a Jack Daniel's Distillery Tour, a behind-the-scenes look at the Jack Daniel’s Fire Brigade and the private concert. Additionally, one lucky consumer and a guest will have the chance to meet these heroes and join them in their celebratory weekend through a separate sweepstakes which opens March 18.

“I have the utmost respect for our first responders and all they sacrifice for our safety,” shared Chase Rice. “There’s a camaraderie and a sense of pride in the fire brigade that reminds me of our road family, and as a long-time fan of both Jack Daniel’s and Tennessee Fire, it’s an honor to perform for them and raise a glass to their immense contributions.”

To enter the sweepstakes or support the cause, visit www.jackfire.com.

Your friends at Jack Daniel’s remind you to drink responsibly.

About Chase Rice
Country music maverick Chase Rice has become one of country music’s most exciting figures since arriving in Nashville, building a loyal fan base across the country through his energetic live shows and gaining the attention of music critics and industry professionals alike with his edgy, eclectic sound. The Tar Heel State native recently released his sophomore album, Lambs & Lions, with new label Broken Bow Records. The first single from Lambs & Lions, “Three Chords & The Truth,” was a Top 20 hit and the follow-up, “Eyes On You,” has been streamed over 100 million times and is now Top 15 and quickly climbing at country radio. Rice’s debut album Ignite the Night launched at No. 1 on Billboard’s Top Country Albums and No. 3 on the all-genre chart, and produced a pair of Top 5 hits, the Platinum-certified "Ready Set Roll" and “Gonna Wanna Tonight.” After supporting Kenny Chesney’s The Big Revival Tour, Rice consistently sold out 2,500-3,000 seat venues on his headlining JD and Jesus Tour, Everybody We Know Does Tour and Lambs & Lions Tour. He recently served as direct support Luke Bryan Farm Tour 2018 and headlined a U.K. run in advance of his highly-anticipated Eyes On You Tour, currently underway. For more information visit www.chaserice.com.

About the NVFC
The National Volunteer Fire Council (NVFC) is the leading nonprofit membership association representing the interests of the volunteer fire, EMS, and rescue services. The NVFC serves as the voice of the volunteer in the national arena and provides invaluable resources, programs, education, and advocacy for first responders across the nation. NVFC membership includes more than 24,000 individuals, departments, state associations and corporate supporters. Learn more at www.nvfc.org.