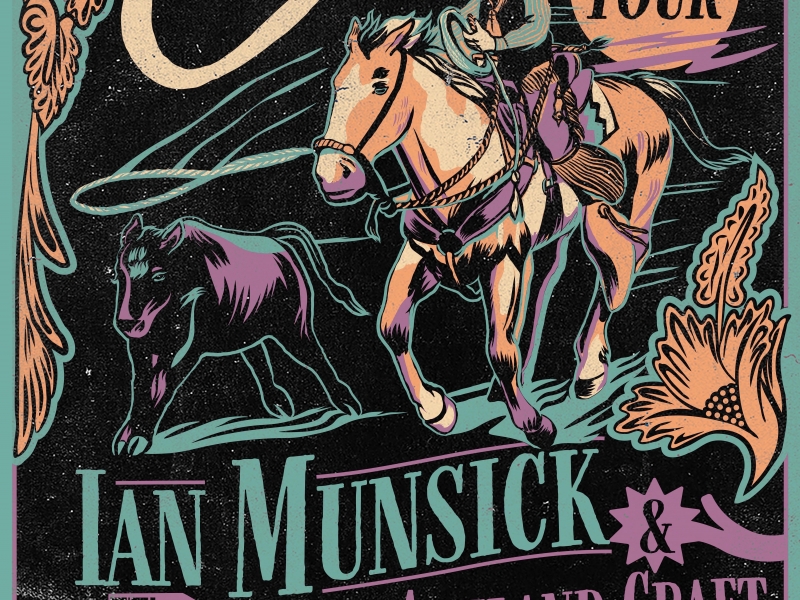 NASHVILLE, Tenn. – With a staunch fan following building on the heels of his Westwood 2022 Tour, Wyoming-native and truth-teller Ian Munsick takes his SiriusXM The Highway single --written with songwriters Philip Eugene O'Donnell and Aby Gutierrez and featuring special guest and two-time CMA winner Cody Johnson – and turns its notion into a celebratory national tour: Long Live Cowgirls 2023 Tour. With a voice Raised Rowdy calls “the best falsetto in country music” on full display, the tour compliments news of a forthcoming sophomore album by Munsick is slated for early ’23 on Warner Music Nashville.

"'Long Live Cowgirls' is more than just a song. It's an ode to a lifestyle that, until recently, has been a mystery to the masses," reflects Munsick. "Those who have chosen to live the vigorous, unglamorous, western way of life are rarely recognized for it. In fact, that's usually why they choose to live that way. Miles away from the burdens of modern society with only the natural world to give them praise. I think country music listeners resonate with that. They're either living that life, or want to live that life."

Kicking off at the legendary Gruene Hall in New Braunfels, Texas on Jan. 20, the tour will make stops in strongholds Fort Worth, Texas; Knoxville, Tennessee; Indianapolis, Indiana and more before wrapping the first leg of the tour in Georgia on March 16. "We're hitting a ton of places we've never played before this winter/spring,” explains Munsick. “That's probably what I'm most excited about. There's nothing in the world quite like the first time you play in a city or town and have no idea what's gonna happen when you hit that stage. Sharing that first time energy with the crowd is something that only happens once."

Munsick recognizes a similar free-spirited country in contemporary honky-tonk sparkplug, “I Smoke Weed” (with Brothers Osborne) and “Make It Past Georgia” -singer Ashland Craft, inviting the South Carolinian to join his Cowgirls trek. Her Travelin’ Kind debut album previously secured the songwriter inclusion on CMT’s coveted Next Women of Country list and opening ahead of Zac Brown Band, Luke Combs and Morgan Wallen.

On touring with Ashland Craft, Munsick shares, "Anytime an artist asks if they can go on tour with just a guitar and a microphone, you know they're the real deal. Ashland Craft is a badass. Her voice is the exact reflection of who she is. Raw, real, edgy and unapologetic. There are few artists as 'outlaw' as Ashland. She really doesn't give a f*** and country music needs more of that."

In sharing her excitement, Craft exclaims, "I am so excited about being asked to join Ian on tour! I’ve always found a certain comfortability and vulnerability in playing a stripped back acoustic set, and that was something that snagged me the very first time I saw Ian perform live. He does such a kickass job of capturing his way of life and his love of country and bluegrass music and telling that story through his music and on stage. Watching his journey has been inspiring and I’d put all my money down in saying that this tour is going to be electrifying! Let’s get honkytonk!"

Before the tour is underway, Munsick ends ’22 with a performance at the National Finals Rodeo for Rodeo Vegas on December 10. For more information and tickets, visit IanMunsick.com.

ABOUT IAN MUNSICK
Breathing fresh Rocky Mountain air into the Nashville music scene, Ian Munsick is pioneering a new brand of country. The Wyoming-born singer / songwriter’s upbringing was a mix of working the ranch and working crowds. Under the tutelage of their fiddle-playing father, Munsick and his two older brothers grew up playing everything from bluegrass to The Beatles. Captivated by traditional lyrical truth and the modern soundscape, Munsick followed his ear to Music City. After establishing a robust touring career as an independent artist, he signed a major label record deal with Warner Music Nashville in 2020. Since then, he has accumulated more than 340 million global streams as well as accolades from Spotify (“Hot Country Artist to Watch”), MusicRow magazine (“Next Big Thing”) and more. His debut album Coyote Cry features his mile-high tenor underscoring self-penned songs that conjure “equal parts epic adventure and down-to-earth wisdom” (American Songwriter). It marks the dawn of western pop-laced country, pulling a thread straight from Chris LeDoux through Post Malone. Imagery-soaked ode to the west “Long Haul” earned Munsick his second iHeartRadio Rocky Mountain Country Music Award for Song of the Year. The recent releases of “Long Live Cowgirls” (with Cody Johnson), “More Than Me” and “Horses & Weed” are ushering in the next chapter of his musical saga… and fans are finding that, with Ian Munsick, western country is reborn.

ABOUT ASHLAND CRAFT
Piedmont, South Carolina native whose strong, personal songwriting is rapidly earning a dedicated fanbase with the release of her 2021 debut album, TRAVELIN' KIND. “There's a New Country Badass in Town, and Her Name is Ashland Craft," hails American Songwriter, as her soulful country voice helped catapult her to the Top 10 on NBC's The Voice and the stages of Zac Brown Band, Cody Johnson, Ashley McBryde, Brothers Osborne, Morgan Wallen, Luke Combs and most recently, Marcus King. Craft has also notched major collaborations with Brothers Osborne on HIXTAPE: Vol. 2 and HARDY's acclaimed project, A ROCK.