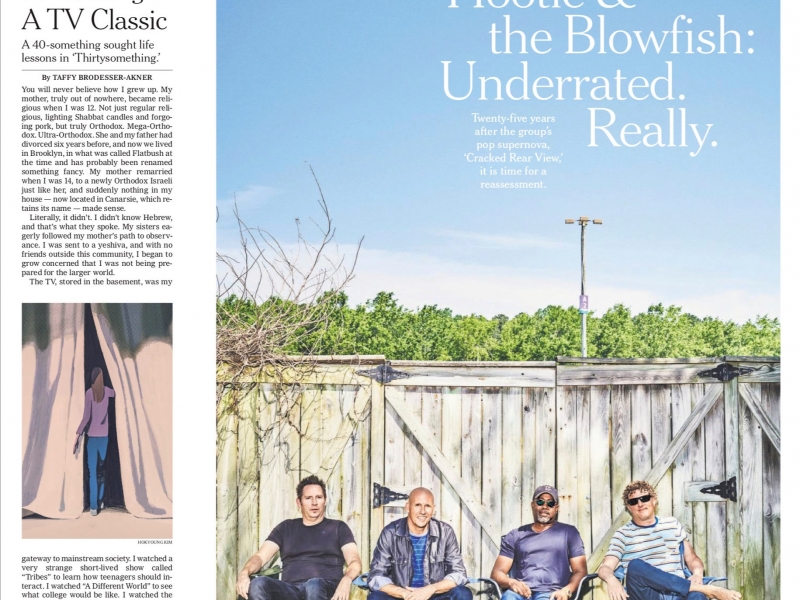 Twenty-five years after Hootie & the Blowfish released what remains one of the best-selling albums of all time, Cracked Rear View, The New York Times declares “it’s time for a reassessment” in a thought-provoking Arts & Leisure section cover story on Sunday’s June 9 issue and available online here.
As the article explains of Hootie’s mid-’90s transition from global sensation to apparently uncool, “For about 18 months, there was no more prominent artist in music: On an episode of the second season of ‘Friends,’ Ross gets Hootie tickets for his birthday; ‘Saturday Night Live’ mocked Rucker as the leader of a frat nation. The band won two Grammys in 1996, including best new artist. After that, however, came a precipitous drop. Hootie became, to some, a punch line — shorthand for the kind of middlebrow rock music that arrived in the wake of grunge’s demise.”

Such a juxtaposition left many wondering just how the latter perception came about, a conversation that has returned to the forefront as the band is back on the road with the Group Therapy Tour – their first full outing in a decade – ahead of forthcoming new music with UMG Nashville. As The New York Times emphasizes, of “a truth that has gone unsaid for too long: At its peak, Hootie & the Blowfish was a genuinely excellent band. Earthen, soothing, a little ragged. And also deft, flexible and unflashily skilled. It splendidly blended the Southern college rock of the late 1980s (the dBs, R.E.M.) with shades of vintage soul, bluegrass, blues and more, rendering it all with omnivorous-bar-band acuity. In the gap between late grunge and the commercial rise of hip-hop and rap-rock, Hootie was a balm.”

In re-evaluating the debut album that cemented Hootie & the Blowfish among the all-time greats when it comes to sales and certifications, The New York Times continues: “The first thing you notice when you return to Cracked Rear View now is how ramshackle and loose at the edges it feels. Even though the songs are sturdy, it feels remarkably hand spun. And it offered a tonic: Optimistic harmonies drive it from the very beginning. But this joy wasn’t uncritically ebullient — beneath each of its healing lyrics was something broken.”

From stories of racial epithets directed at lead singer Darius Rucker throughout the Southern fraternity circuit to the little critical attention paid to their follow up albums after Cracked Rear View’s success, the article takes care to point out that the path of Hootie & the Blowfish was not as upbeat and carefree as their harmonies might suggest.

Such a complicated history helps explain why “In moments, [opening night of the current Group Therapy Tour] felt like a confident victory lap, but more often, the mastery and flair was unfussy, a well-oiled working band hitting its marks with factory precision. Out at the merchandise booth… you could support the band finally leaning in to its awkward pop antihero status by taking home a T-shirt that trumpets, in a bulbous 1970s font, ‘I Still Like Hootie, Bitch.’”

About Hootie & the Blowfish
With the rich, bluesy vocals of Darius Rucker and gleeful harmonies of guitarist Mark Bryan, bassist Dean Felber and drummer Jim "Soni" Sonefeld, Hootie & the Blowfish have sold over 25 million records worldwide to date after their infectious melodies hit the airwaves in 1994 with hits such as “Hold My Hand,” “Let Her Cry” and “Only Wanna Be With You.”

The band remained a top draw nationwide and released five more albums for Atlantic: Fairweather Johnson, Musical Chairs, Scattered, Smothered & Covered, Hootie & The Blowfish and The Best of Hootie & The Blowfish, as well as Looking for Lucky on their own Sneaky Long Records and LIVE in Charleston, The Homegrown Concert Event DVD and CD. The band took a break from full-time touring in 2007, reuniting annually for a variety of philanthropic events while also pursuing solo projects. 2019 will mark the band's first full-time touring year in over a decade as they embark on the Group Therapy Tour in support of forthcoming new music under a new record deal with Universal Music Group Nashville.