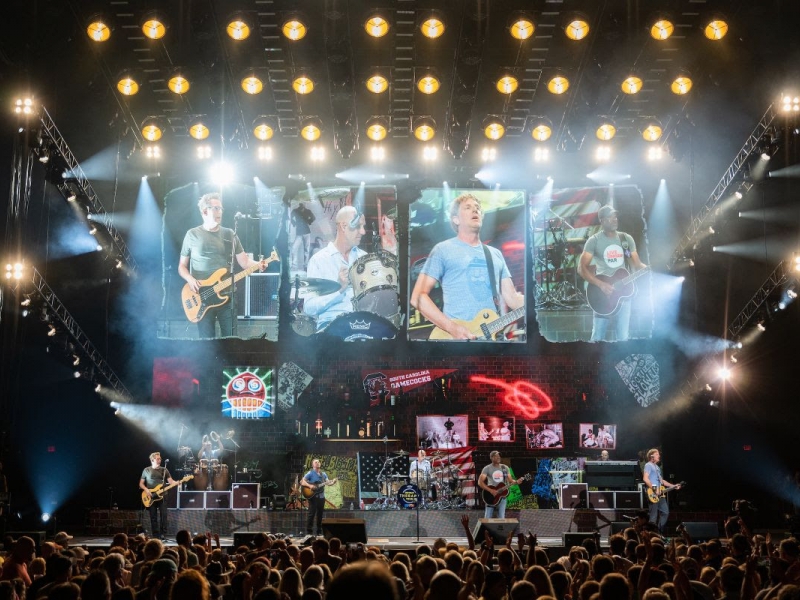 After a decade-long hiatus from full-time touring, iconic pop-rockers Hootie & the Blowfish“clearly seemed thrilled to be back on stage with a sellout crowd in front of them,” as the Raleigh News & Observer remarked of Friday night’s concert, the second of three shows launching the Group Therapy Tour which drew over 19,000 in attendance in spite of a rain delay.

The third night of opening weekend, Atlanta Journal Constitution proclaimed, “this is a well-produced nostalgic romp featuring a setlist stacked with singalongs, an effective stage show (sharp lighting, major video screen action) and a band that sounds record perfect,” also noting that “what this return to the road will demonstrate for those who have been out of the Hootie orbit [as the band continued to play select annual concerts] is that the hits still hold up.”

The Gwinnett Daily Post also raved about the “crowd-pleasing” show, emphasizing that “frontman [Darius] Rucker's raspy vocals are even more mesmerizing in person and his gaze seemed to reach back to the viewers on Lakewood’s berm. Lead guitarist [Mark] Bryan frolicked barefoot on stage with a stage presence that comes with a band rejuvenated with its first full tour in more than 10 years — 15 years since its last studio album.”

Like fans, the band was ready to celebrate memories of their early days as both Rucker and Bryan shared nostalgic memories of their first forays into each market, with tales of coming up in the Carolinas on Friday night in Raleigh and of early gigs in Athens, Georgia the talk of Saturday night in Atlanta.

Hootie & the Blowfish took the stage after a hit-filled opening set by special guest and fellow 90s stalwarts Barenaked Ladies, whose set included their catchy theme song for “The Big Bang Theory” as well as fan-favorites “One Week” and “If I Had $1000000” plus well-received covers of Led Zeppelin’s “Whole Lotta Love” and “Shallow” from A Star Is Born.

Rucker and Bryan then took the stage with bandmates Dean Felber and Jim “Soni” Sonefeld for a set list that began each night with “Hannah Jane,” track one on their 21X-Platinum debut album Cracked Rear View which celebrates its 25th anniversary this year and remains one of the best-selling albums of all time. The show continued with Hootie classics such as “Let Her Cry” and “Hold My Hand,” plus covers of Rucker’s solo No. 1 “Alright” and GRAMMY-Award winning take on “Wagon Wheel,” as well as R.E.M.’s “Losing My Religion,” a natural fit for the band which also shared stories of R.E.M.’s influence on them as young artists. Keeping fans on their feet until the very end, “Only Wanna Be With You” sent a satisfied crowd into the night.

The trek continues with 44 additional U.S. & Canada dates throughout the summer, including stops at the iconic Hollywood Bowl, a two-night stand at Madison Square Garden and a three-night homecoming finale in Columbia, S.C. before the band heads overseas for a run of eight U.K. and Irelands dates in October. The tour also comes with news of a forthcoming album, expected later this year under a new record deal with Universal Music Group Nashville.

About Hootie & the Blowfish
With the rich, bluesy vocals of Darius Rucker and gleeful harmonies of guitarist Mark Bryan, bassist Dean Felber and drummer Jim "Soni" Sonefeld, Hootie & the Blowfish have sold over 25 million records worldwide to date after their infectious melodies hit the airwaves in 1994 with hits such as “Hold My Hand,” “Let Her Cry” and “Only Wanna Be With You.”

The band remained a top draw nationwide and released five more albums for Atlantic: Fairweather Johnson, Musical Chairs, Scattered, Smothered & Covered, Hootie & The Blowfish and The Best of Hootie & The Blowfish, as well as Looking for Lucky on their own Sneaky Long Records and LIVE in Charleston, The Homegrown Concert Event DVD and CD. The band took a break from full-time touring in 2007, reuniting annually for a variety of philanthropic events while also pursuing solo projects. 2019 marks the band's first full-time touring year in over a decade as they embark on the Group Therapy Tour in support of forthcoming new music under a new record deal with Universal Music Group Nashville.

About Barenaked Ladies
Over the course of their remarkable career, Barenaked Ladies have sold over 15 million albums, written multiple Top 20 hits (including radio staples “One Week,” “Pinch Me,” “Brian Wilson," “If I Had $1,000,000”), garnered 2 GRAMMY nominations, won 8 JUNO Awards, had Ben & Jerry’s name an ice cream after them (“If I Had 1,000,000 Flavours”), wrote and recorded the theme song to the award-winning TV series “The Big Bang Theory,” participated in the first-ever “space-to-earth musical collaboration” with astronaut Chris Hadfield and garnered an international fan base whose members number in the millions. In 2018, the band (vocalist/guitarist Ed Robertson, drummer Tyler Stewart, keyboardist Kevin Hearn and bassist Jim Creeggan) celebrated their 30th anniversary with the release of a dynamic new album, Fake Nudes, a much-deserved induction into the Canadian Music Hall of Fame (with Rush vocalist Geddy Lee handling the honors) and a proclamation from Toronto Mayor John Tory declaring October 1st “Barenaked Ladies Day.” The band is currently in pre-production for a new album due in 2019. For more information, visit www.barenakedladies.com.