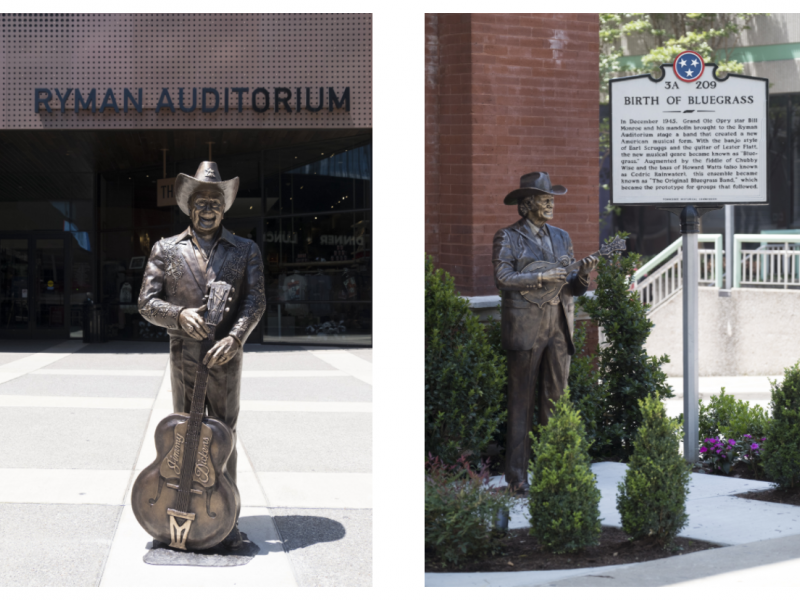 NASHVILLE, Tenn. – Two of the most profound musical innovators in country and bluegrass music will forever remain part of the Soul of Nashville with the installation today of life-size statues of Little Jimmy Dickens and Bill Monroe at the historic Ryman Auditorium.

The Ryman, which is recognized as the Soul of Nashville, was founded as a beacon of hope for the faithful; it has become an international symbol of cultural significance drawing millions of people to Nashville to find their own inspiration in the wood pews under the famed stained-glass windowpanes.

The bronze likenesses were commissioned by the Ryman Auditorium in recognition of the 125th Anniversary. Sculpted by artist Ben Watts, the life-size statues took one year to create. Little Jimmy Dickens’ statue is adjacent to the landmark statue of riverboat captain Thomas G. Ryman on Fourth Avenue. The replica of the Father of Bluegrass Music Bill Monroe is located near the Fifth Avenue driveway.

The iconic brick building, which is on the national registry of historic places, rose to prominence first as Nashville’s largest venue for civic gatherings and later for attracting national touring shows including the biggest names in music, theater, and entertainment including Katharine Hepburn, Harry Houdini, Bob Hope, the Ziegfeld Follies, and countless others including President Theodore Roosevelt.

The Ryman became the home of the Grand Ole Opry in 1943, and the world of broadcast entertainment changed forever as the live radio and TV show brought the likes of Roy Acuff, Johnny Cash, Patsy Cline, Minnie Pearl, Elvis Presley, Marty Robbins, and Hank Williams to the stage and into living rooms around the country. The program’s 31-year Ryman ignited the growth of country music.

Dickens and Monroe were instrumental to that burgeoning popularity.

Dickens was born James Cecil Dickins, but was world famous as “Little Jimmy.” He was known for his humorous novelty songs, his small size (4'11"), and flashy wardrobe, but his contributions to country music were far greater than his diminutive stature. He started as a member of the Grand Ole Opry in 1948 and was inducted into the Country Music Hall of Fame in 1983.

Little Jimmy Dickens was a beloved fixture at the Opry, on stage and backstage. He passed away on Jan. 2, 2015. Before his death, he was the oldest living member of the Grand Ole Opry.

Dickens recorded many novelty songs including "Country Boy," "A-Sleeping at the Foot of the Bed,” "I'm Little but I'm Loud,” and his biggest hit, the No. 1 “May the Bird of Paradise Fly Up Your Nose.”  His song "Take an Old Cold Tater (And Wait)" inspired Hank Williams to nickname him Tater.

Over the years, Dickens made appearances in music videos by close friend and fishing buddy, fellow West Virginia native Brad Paisley. Along with joining on bonus comedy tracks on several of Paisley’s albums, Dickens also joined Paisley and his CMA Awards co-host Carrie Underwood in several show monologues. Upon Dickens’ death in 2015, Paisley lamented the loss of his hero and “the best friend a human being could ask for” and has performed numerous tributes to Dickens’ life and career.

"This was a man who was honing his craft before Hank Williams, who we sort of credit as the father of modern country music in many ways," said Paisley during the unveiling today. “He saw everything in those decades that he stood on that stage, like Patsy Cline and Loretta Lynn and Garth Brooks. By the time Jimmy left us, he had become the Grand Ole Opry. On a night that he wasn't there, you were cheated out of something and he knew that. He realized when he was well enough to do it, he went. He knew that he owed it to the younger generation that wanted to see him, it was another lesson in how you entertain people. He gave them everything that he had on that stage and in this building for many many years. So I think it's really appropriate that he's going to be one of the statues that's a permanent reminder of what we should be in this building."

Speaking on behalf of Monroe was Ricky Skaggs, whose own career was heavily influenced by the mandolin player. Skaggs was only six years old in 1960, when he first got to perform on stage with Monroe and his band at the high school in Martha, Kentucky.

"I don't know if you ever get another Bill Monroe in a century," said Skaggs. "There's not a lot of people that I know of who could be cited as creating a whole new genre of music, but he did. He had the ear to hear it, the talent to play it and the heart to keep it alive because he was strong, he was powerful. I don't know any person who could have withstood, pushed through and made it like him. He had music in his veins. It was the thing that pushed him so much. It wasn't just to make a living. It was to get something out of him and take to people that he loved, and that was the fans that loved this music. I have traveled all over the world into places you would think that bluegrass music would never make it to ... and you meet someone there that actually plays the music. So this music has totally gone around the world."

The Father of Bluegrass was a gifted player, singer, and songwriter. The genre takes its name from his band, the Blue Grass Boys, named for Monroe's home state of Kentucky. Monroe's performing career spanned 69 years before he died on Sept. 9, 1996 – just shy of his 85th birthday.

Monroe formed the first edition of the Blue Grass Boys in Atlanta, Ga. The band eventually featured more than 150 performers including Earl Scruggs and Lester Flatt. In October 1939, Monroe successfully auditioned for a regular spot on the Grand Ole Opry impressing Opry founder George D. Hay with his energetic stage performance – he soon started recording and developing what would eventually become his signature style with fast tempos, instrumental virtuosity, and musical innovation. His recordings have become classics including “Blue Grass Breakdown," "My Rose of Old Kentucky,” and Monroe's most famous composition, “Blue Moon of Kentucky.”

Monroe, who was inducted into the Country Music Hall of Fame in 1970, remained a mainstay at the Opry. There he settled into a role as a musical patriarch influencing generations of young musicians including Emmylou Harris, Waylon Jennings, and the Oak Ridge Boys.

With a $14 million renovation in 2015, the Ryman is widely considered one of the finest performance venues in the world hosting performers from all genres of music. Today, the Ryman draws artists from all corners of the globe eager to experience the thrill of walking to the front of the stage to perform.

About Ryman Auditorium
A National Historic Landmark, Ryman Auditorium was built as a tabernacle by Captain Thomas G. Ryman in 1892, served as the home of the Grand Ole Opry from 1943-74, and was completely renovated in 1994. The Ryman is open for tours during the day and at night offers a wide variety of entertainment performances, just has it has for over 125 years. The venue was voted the 2010, 2011, 2012, 2013, 2014, 2015 and 2016 Pollstar Theatre of the Year and recently took home its fifth-consecutive CMA Venue of the Year Award. Ryman Auditorium is owned by Ryman Hospitality Properties, Inc. (NYSE: RHP), a Nashville-based REIT that also owns and operates the Grand Ole Opry, and 650 AM WSM. For more information, visit ryman.com.