HEARTFELT NO. 1 PARTY FOR “KNOWING YOU” KENNY CHESNEY’S 34TH NO. 1 BRINGS NASHVILLE OUT TO HONOR 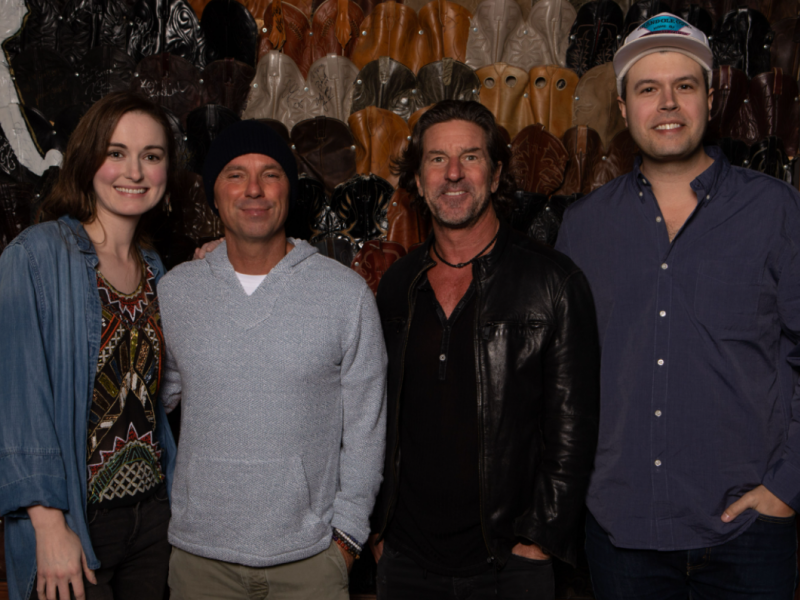 NASHVILLE, Tenn. — When Kenny Chesney recorded “Knowing You,” people thought he was crazy. Everyone knew it was a brilliant classic country ballad, but what do you with that? If you’re Kenny Chesney, you let your first full-on Blue Chair Records/Warner Music Nashville release Here And Now get a head of steam – and send the song to country radio.

What some folks would think is crazy, Kenny Chesney, Warner Promotion’s Kristen Williams, Shari Roth and team took to the top of the charts. It wasn’t a rocket fueled 18-week ride like many of Chesney’s multiple-week No. 1s, but the slow and steady rise matched the song’s tempo and reminded people just how good real country music feels. That No. 1 was cause for the songwriting and publishing communities to come together at Nashville’s historic Sutler Saloon to do something equally unthinkable in recent times: to celebrate a No. 1 together as a community.

“When I met you, I asked you what your dream first cut was,” Adam James – whose entire family, from grandmother who tracked the song’s progress week-to-week on the country countdown shows to his darling toddlers, were in attendance – told those assembled, “and you said, ‘George Strait.’ Well, Kenny, that’s how I – and a lot of us – feel about you.”

For Adam James and Kat Higgins, “Knowing You” was their first No. 1. Nashville Songwriters Hall of Famer Brett James acknowledged the thrill of that first No. 1, adding, “The first time I met these two writers, it was writing this song.” For Brett James, who’s written a fistful of Chesney smashes including “When the Sun Goes Down,” “Reality” and “Out Last Night,” he told those assembled that his first cut was in 1997, when Kenny recorded “Kiss Me, Kiss Me, Kiss Me” on Everywhere We Go. Brett James ended up back in college, but returning to the record business, he and Chesney fell into the multiple-week No. 1 “When the Sun Goes Down,” and his future was set.

For Higgins, who spoke of publisher Pat Higdon’s faith in a young female writer, she embodied the joy that comes with topping the chart. But even more she cherished the idea that Kenny’s version of their song existed. “Writing with these guys, then having Kenny Chesney record this song the way that he did, it’s what you hope for, what you dream.”

Chesney, always quiet, took the stage after the executives spoke, telling the writers how proud he was to have been able to record a song like this. With a smile, he said, “I remember my first No. 1 – and I know that feeling. There’s nothing like it...

“And when I heard this song, I knew: I have a few people like that. Some have passed, some aren’t in my life anymore, but this song... It leaves it wide open, so the person can be anyone who’s gone. That’s what’s so beautiful about this, and I’m so glad I got to be the one to sing this.”

Ever the welcoming host, BMI’s Clay Bradley kept the presentations coming, reminding people how good it felt to be together, how it reflects the spirit of the people who write those songs that come from the heart. Beyond reminding people to vote for the song on the ACM’s second-round ballot, he stood as a representative of a Nashville built on creators, where songs are king and the best song wins.

Like Warner Nashville Chairman and CEO John Esposito, who ran through accolades, stats and the power of really special songs to carry the moment, the executives were as moved by the music as the other 200 people in attendance. As Chesney said later, “This is the kind of vibe Nashville was built on. Everyone knew everyone, rooted for great songs and created an all-for-one spirit. I love that ‘Knowing You’ could bring us all together like that as we start what I think is going to be a very good year.”