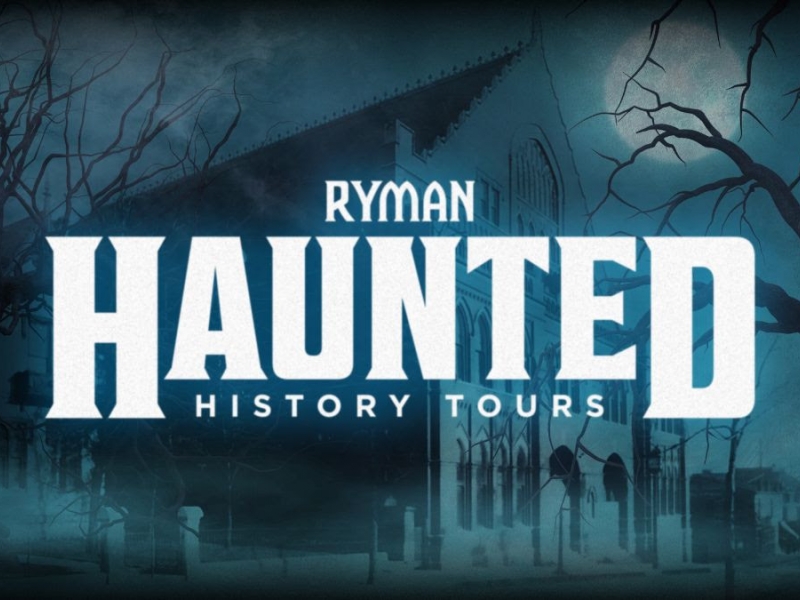 NASHVILLE, Tenn. – Ryman Auditorium has announced the return of its Haunted History Tour, set to take place on Monday, Oct. 25, where guests will have the opportunity to explore the untold history behind unexplained sightings and occurrences reported at the Ryman throughout her almost 130-year history. Tickets are on sale now for $40, and includes a 45-minute guided tour, including access beneath the historic stage, a keepsake photo to commemorate the experience and refreshments. Guests are encouraged to come dressed in costume. For more information and to purchase tickets, visit ryman.com.Known around the globe as one of the best performance halls in the world, the Ryman celebrates all genres, backgrounds and people on its stage and in every pew with its diverse calendar, including recently announced shows Christmas 4 Kids, Billy Idol with Steve Stevens, Trace Adkins and Taylor Tomlinson. See the full show calendar and purchase tickets at ryman.com.

Idol and Stevens are celebrating the release of The Roadside EP, Billy Idol’s first new release in seven years, featuring the hit single “Bitter Taste.” This performance is one of the first Idol/Stevens duo shows since the pair’s acclaimed 2019 North American duo tour, which found the longtime friends and collaborators performing their hits, deeper album cuts and songs that influenced them in a new and intimate setting, colored by in-between song stories and banter from Billy Idol. Idol and Stevens’ undeniable chemistry and seemingly limitless energy, founded on a mutual love of all things rock n’ roll, has produced decades of successful tours and iconic hits including “Rebel Yell,” “White Wedding,” “Dancing With Myself,” “Eyes Without A Face,” “Flesh For Fantasy,” “Cradle Of Love” and more. Tickets start at $45.

In his 25-year career in country music, Trace Adkins has sold over 11 million albums, charted over 20 singles, earned numerous awards and GRAMMY nominations, and garnered over two billion streams. A Grand Ole Opry member for nearly two decades, the Louisiana native is known for dynamic baritone and fiery, always-memorable live performances, and has expanded his country career to include film and TV acting. He broke out in 1996 with the debut album, Dreamin’ Out Loud, cracking the Top 5 of Billboard’s Hot Country Songs chart with “Every Light In the House Is On” and following with the No. 1 smash, “This Ain’t (No Thinkin’ Thing).” Since then, Adkins has pioneered a mix of classic country-minded traditionalism and adventurous, good-natured showmanship, breaking open new avenues in modern country through fun-filled hits like “Honky Tonk Badonkadonk” and “Hillbilly Bone” (with Blake Shelton). Tickets start at $45.

Named to Forbes’ 2021 class of 30 Under 30, Taylor Tomlinson exploded onto the international stage when her first-ever, hour-long special, Quarter-Life Crisis, debuted on Netflix in March 2020. The special went on to be named ‘Best of 2020’ by The New York Times, Decider, Paste and earned unanimous critical praise with The Washington Post calling her, “your favorite quarantine-watch” and Newsweek noting she is, “undeniably hilarious.” Taylor Tomlinson has been honing her craft for more than a decade and at just twenty-seven years old, she possesses a degree of wisdom that’s typically earned with age. Variety Magazine named her one of the ‘Top 10 Comics to Watch’ at the Just for Laughs Festival. Tickets start at $39.75.

Multi-Platinum artist and best-selling author Michael W. Smith continues to live out his dream; he releases new music regularly and performs around the world to sold-out crowds of loyal and inspired fans. During Michael’s storied career, he’s not only been honored with three Grammy Awards, 45 Dove Awards, an American Music Award and has sold more than 15 million albums, he’s also given back to the global community. Michael has raised funds to battle AIDS in Africa alongside longtime friend Bono, started Rocketown, a safe haven for young people in Tennessee to meet and find hope, and has helped more than 70,000 children’s lives through Compassion International.

Winning NBC’s “America’s Got Talent” at just 12-years old by the most votes for a final performance in the history of the show, singer/ventriloquist Darci Lynne Farmer impresses audiences across the country with her sweetheart disposition and undeniable, show-stopping talent beyond her years. Singing through her friends helped the young entertainer find a voice inside she didn’t know she had and helped her overcome a lifelong struggle with shyness. An Oklahoma native, Darci began participating in talent-based pageants at a young age, and picked up ventriloquism shortly after. Darci and her friends are continually on the road bringing smiles to audiences across the country. Tickets start at $29.75.