Happy Does: Writer Greylan James Halloween'd As Kenny When He Was 5 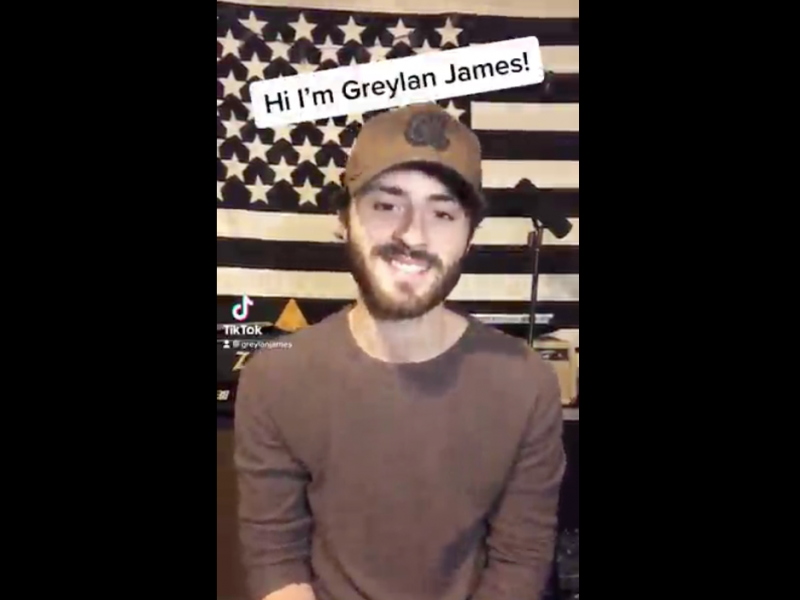 NASHVILLE, Tenn. – At a time when the world needed a song about focusing on hope and the good things, Kenny Chesney decided to put out “Happy Does,” a percolating stroll about life’s joys often being a result of how you choose to see the world. What he didn’t know was Greylan James, one of the co-writers, had trick-or-treated as Kenny when he was 5 years old... and had met the East Tennessee songwriter/superstar when he was just 11, as one of the Cider Mountain Boys, playing “Rocky Top” on the banjo at a benefit just outside Knoxville. “I remember that benefit at the Eagle Distributing warehouse, and that little boy,” Chesney marvels, having since seen the picture of their encounter. “Even at 11 years old, he had a look in his eye, and you could tell how much he loved music. When you see someone like that, you know how much songs mean.” “I’d just gotten my first C, and I’d told my Dad, ‘I don’t need school, I’m gonna be a country star.’” James says. “When we were playing, I saw all these people closing in on something, and it was Peyton Manning and Kenny Chesney, who’d come in, which is like Jesus and God walking into a room. When my Dad and I went up to him after, my Dad asked if he had any advice, because I really wanted to be a singer. “Kenny looked me in the eye. He said, ‘Here are my two things: Stay in school. Learn how to write songs.’ And I really took that to heart! Here’s Kenny Chesney telling me, and I listened with everything I’ve got.” “When I heard the song,” Chesney says of “Happy Does” with a smile, “it was so positive and felt so happy! You couldn’t not smile listening, and I felt like the world needed a bit of that right now. To me, it was everything I was raised on – and it turns out Greylan was raised on the same stuff, too.” For the 24-year-old, who named his first dog Chesney, the news the song was being cut was almost too much. “I literally grabbed my dog, ran into the yard, doing a big ugly cry – and my dog was licking tears off my face. My whole goal always was to learn how to write songs, and maybe one day... After I heard my hero for my whole life cut my song, everything else is gravy. And then we found out it’s a single.” Even crazier, it turns out the song’s character, Sunaco Charlie, is an actual guy, whom James met at a gas station in Maynardville, Tennessee. “Sunaco Charlie’s a real dude, though I think I mispronounce it... I’d stopped to get some sunflower seeds, and there’s this African American cashier. We got to talking, and I thought about being caught in a minimum wage, dead end situation, and was trying take it in. I told him to have a great day at the end when we finished, and he went, ‘It is a great day! This is my last day. I’m quitting and going to Hollywood to be an actor!’ We fist-bumped, and I walked out. “To me, what could be more ‘Happy Does’? Take your dream and go get it!” For James, the name on the tag was still on his mind when he sat down with Jamie Paulin, Brock Berryhill and Brock Clawson to write that Monday. That idea of taking hold of your dreams that inspired a song is now turning into a once-in-a-lifetime first hit single experience. “This is the magic,” Chesney says. “You wait all your life, save up all your dreams – and then the dam breaks. I couldn’t be happier or prouder than if it was me, because those firsts are everything! To see someone from back home, someone who loves and believes in the music so much be in this moment, that’s what it’s all about. And it’s a great song with a message I think a lot of us need right now.” “I hope even more people found their own going to L.A. moment,” James says. “I’m sure having mine! My parents were out at the lake the first time I heard it on the radio, and I FaceTimed them, then they were telling everybody their son wrote this song. It was crazy, but awesome crazy. And just awesome, too.”