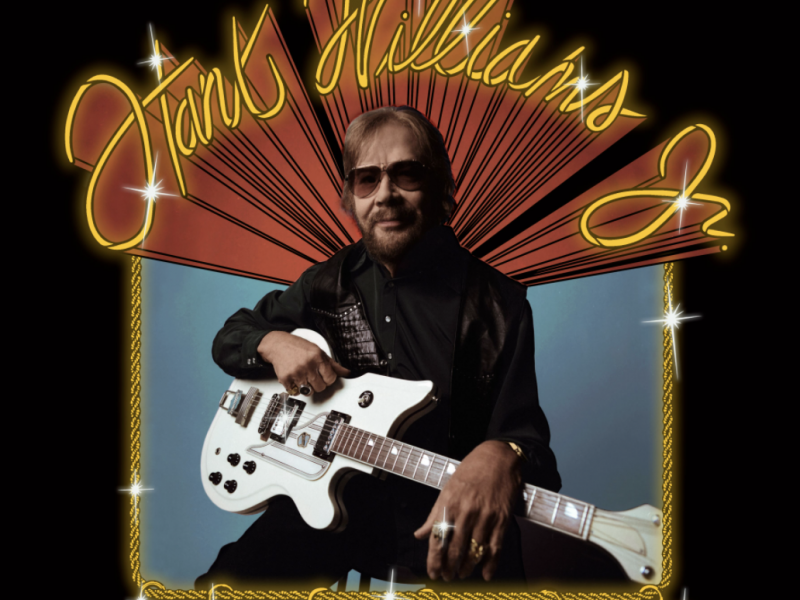 NASHVILLE, Tenn. – Larger than life, capable of summoning “all his rowdy friends” with a couple crashing downbeats and a blaring guitar riff, Hank Williams Jr. has been one of country music’s truest outlaws for over half a century. But at his core, the 72-year-old legend is the bluesman, Thunderhead Hawkins. Pure, unqualified and unadulterated, the only son of Hank Williams has the same down low lonesome in his veins as the man Rufus “Tee-Tot” Payne taught to play guitar as a small child growing up in Greenville, Alabama.

With Rich White Honky Blues, available now via Easy Eye Sound, the second-generation Country Music Hall of Famer makes good on his legacy with a turpentine and rough wood take on the hill country blues that informed his father’s raw-boned style of putting his pain out there. GRAMMY-winning Producer of the Year Dan Auerbach recorded the set live over three days, with a dozen songs, reprising classics from Robert Johnson, Lightnin’ Hopkins, R.L. Burnside, Muddy Waters, Big Joe Turner, and a few from Bocephus himself.

“The blues is where it all comes from,” concedes Williams. “It’s the start of everything musical in my family; everything starts with Tee-Tot and flows from there. I’ve always flirted with this stripped back blues – all the way back to the ‘80s. But I finally made an album that’s just that, and I like it.”

“If you wanted to play this kind of music, you couldn’t have better players,” Auerbach explains. “The first time I ever saw Hank Jr. on TV, I was a kid raised on Robert Johnson and Hank Williams, Sr. records, and those things came through so clearly watching him. So, I tried to assemble the right parts to just sit in that piece of who he is.”

From the vocal and gut-string bounce of opening track “.44 Special Blues” (Johnson’s “32-20 Blues”), caught on the fly and viscerally gutting the betrayal and consequence rejoinder to a cheating woman, Williams’ vocals are potent, earthy, brash and lascivious. With Burnside’s “Georgia Women” leaning heavily into Williams’ delta blues influences, featuring an explosive dose of slide guitar magic, along with the high-tempo blues burner “Fireman Ring The Bell,” plus the chicken-scratching burn of Big Joe Turner’s metaphoric “TV Mama,” the delectability is greasy, trenchant, built to slather on a too-hot Saturday night.

And those vintage nuggets set the stage for Williams’ own songs.

“It’s that rawness, and how real it is. I was always searching for the rawness, the darkest stuff,” shares Auerbach. “Once we were in it, as soon as we started playing, Hank was invested. That lifted everybody else up, to really push each other.”

A minor-key tempest with a touch of smoke – recalling The Allman Brothers Band’s debt to the blues, “I Like It When It’s Stormy” faces down the rugged breaks and bad women who show a man his mettle, while the vamping “My Name Is Bocephus” redux “Call Me Thunderhead” throttles poseurs and pretenders to not just his throne but Williams’ famed blues doppelganger Thunderhead Hawkins, slicing into the electric blues that’s as much molten Chicago as North Mississippi’s finest.

“You bring who you are,” Williams says, chuckling. “All that... all... of... that... is where my music comes from. When we got into the studio, the more we played, the deeper we got – and the deeper we got, the harder I wanted to go. Those songs just fit the moment.”

The syncopated title track with its blaring electric guitar and rubber bassline may be the most Bocephus of them all. Making the blues an equal opportunity proposition, not just the outpost for the destitute and downtrodden, “Rich White Honky Blues” twines good sex and being cut off as the howling leveler of men regardless of circumstances, as well as serving as a roll call of the artists who twisted him into the man he is today.

“It is what it is,” Williams adds, still laughing. “You know, that’s the thing. Blues is what it is – and whoever you are, there’s a dose with your name on it. You can let it knock you down, or you can stand up and play the guitar, witness to what happened and throw down hard to get rid of it.”

About Hank Williams Jr.
Hank Williams Jr.’s extremely impressive resume has spawned 70 million albums sold worldwide, six PLATINUM albums, 20 GOLD albums, 13 No. 1 albums and 10 No. 1 singles. Marking 58 years since his first album in 1964, Williams Jr.’s 57th studio album Rich White Honky Blues is available now via Easy Eye Sound, featuring 12 songs recorded over a three-day period by GRAMMY-winning producer Dan Auerbach. 2016’s It’s About Time (Nash Icon Records) included the history-making “Are You Ready for the Country,” as well as tunes “Dress Like an Icon,” “Just Call Me Hank,” “It’s About Time” and “The Party’s On” in addition to re-recorded versions of classics “Mental Revenge” and “Born to Boogie” with Brantley Gilbert, Justin Moore and Brad Paisley on guitar. Following It’s About Time, Williams Jr. has released several compilations, including All My Rowdy Friends Are Coming Over: Great Tailgating Songs, A Country Boy Can Survive (Box Set), Hank Jr. Sings Hank Sr. and 35 Biggest Hits. He continues to add accolades to an extremely impressive resume, which includes ACM Entertainer of the Year, CMA Entertainer of the Year and BMI Icon, in addition to a GRAMMY win and coveted inductions into the Nashville Songwriters Hall of Fame and Country Music Hall of Fame.